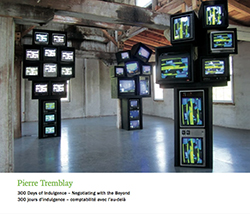 The roots of the Tremblay family can be traced from Québec to France to medieval Normandy, where Pierre du Tremblė of La Rochelle established the family that now bears a variant of his name. The word itself – tremblé, tremblaie, trembleia – derives from Latin and Old French terms for poplar trees, whose leaves tremble in the wind; it was sometimes translated as “a place planted with poplars” or used to refer to those living near such places.

It is recorded that the first Tremblay arrived in New France in 1647: Pierre Tremblay, born in Randonnai in the Perche region of France, completed his voyage to North America on the 6th of August of that year. He settled on the Beaupré coast, where he and a small number of others built farms, homesteads, and eventually churches; he married Ozanne Jeanne Achon, who had emigrated a few months earlier, in Quebec City in October of 1657. The Tremblays had twelve children between 1658 and 1677, and the next generation grew to fifty-three. In following decades and into the next century, other Tremblays made their way to the new world: Louis in 1751, Jacques in 1756, Andrė, with his wife Catherine, in 1769, another Jacques in 1770 and Michel, with his wife Françoise, in 1783.

While the families that settled in Québec City, Charlevoix and Lac St-Jean were eventually to spread throughout North America, many Tremblays remained in Québec generation after generation. The individuals portrayed here – the great-grandparents, grandparents and parents of the artist, part of an extended family network that includes surnames such as Campagna, Drouin, Émond, Fillion and Marceau – are among those who chose to stay, re-planting a culture brought from Catholic France in the fertile lands along the Saint Lawrence.

Photographs began to be made in Québec as early as the daguerreotype era, and by the late 19th century, tintypes, cartes-de-visite and cabinet cards could be found in homes and communities everywhere. The cabinet card in particular took on a dual role, as a portrait while the subject lived, and a memory image after death. With funerary text added to a photograph, prayers could be offered while the deceased was visualized in the mind. Departing spirits asked their survivors for prayer well into the twentieth century; as recently as 1944, Marie Marceau enjoined her family to pray for her:

Repeated faithfully, these incantations would bring indulgence for a wandering soul as well as solace for those who grieved. And over time, a sufficient number of prayers could bring up to three hundred days of relief from purgatory. Photographic images could focus remembrance for the living, and requests for blessing could bring divine intervention for the deceased – no small matter, either then or now.

The collection of family photographs and funeral cards from which this exhibition was formed came into Pierre Tremblay’s possession when he was fourteen. Intrigued with his family’s history, then largely unfamiliar, and sensing he might one day want to use the pictures, he kept them, stored in the same box in which they were found. Notations he made on some prints reveal his first efforts to trace relationships across earlier generations. When Tremblay’s father passed away in 2007 and his mother’s memory began to fail soon thereafter, his curiosity to explore their past – to “connect the dots,” as he put it, by accurately aligning photographs with families – took on a new urgency. The pictures, originally memory objects or totems for negotiating a benign afterlife, became components of something entirely new.

Tremblay had begun adding color, graphic elements, animation, text and sound to photographs as early as the Portraits in a Sentence series, which took shape in the 1990s from photographic images and recordings of spoken phrases, and which was later expanded to encompass multi-channel video and installation. In that work, the photograph was used as a template, or a ground on which a new visual structure could be built – a structure of movement and contemplation, speaking and silence, displayed on clusters of video monitors and ancient TV sets. On their screens, fields of color would appear, flicker and vanish, like birds alighting in branches.

This way of working was continued and extended in Tremblay’s recent video work, Lumières de Nunavut, in which found photographs – in this instance, images downloaded from a webcam on Kimmirut, a tiny village on Baffin Island – were again interwoven with color, graphic elements and sound. The video shows changes of light, season and weather as the prime variables of its display, and also the prime determinants of existence in the high Arctic. It is brief, gripping and visually complex, mixing months and days, hours and instants into a beautifully crafted, cinematic whole, yet a whole in which every component photograph can be clearly seen.

In 300 Days of Indulgence, the viewer can sense echoes and traces of these earlier works, but the approach here is re-framed, and the experience made more haunting. Words and prayers are sometimes repeated but more often partially obscured or excised, as are names, visages, inscriptions and notations. Absent faces and eradicated words draw the viewer in, forcing a confrontation with personal memory: “Blocking the text,” says Tremblay, “makes you read what is left.”

The stillness and gravity of the portraits contrasts sharply with the movement and immediacy of the montages, with their added graphics, overlaid patterns of color, or digital brush marks. The clustering of families around common roots is presented sculpturally, through the trees on which the video monitors are arranged. And the images which divide, merge and separate on these monitors, so cinematic yet so still – they are, after all, photographs – negotiate the spaces in our minds between then and now, as well as the connections between our own families and the three family trees standing here. In a separate gallery, larger-scale projections, compiled as video from photographs of tracings from nature, add another element of contemplation, and another layer of meaning.

So the images themselves are a kind of negotiation: “This work re-connects me with photography,” said Tremblay, “and also with my family. Most of them I never knew…. But by erasing some memories, you create your own new ones, in these imaginary spaces you try to fill up.” These screens light the way through these imaginary spaces; in them, the Beyond looks like an interesting place.