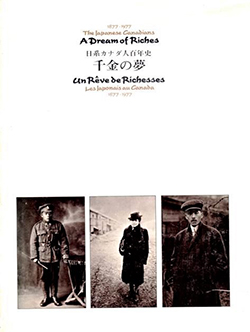 A Dream of Riches: The Japanese Canadians 1877-1977 was published in Vancouver by the Japanese Canadian Centennial Project to accompany a traveling photographic exhibition of the same name. This exhibition, which deals with the history of the Japanese people in Canada — with particular emphasis on the forced internment and relocation to which they were subjected during and immediately after World War II — recently made a return visit to Toronto and was on view at the Canadian Centre of Photography from May 27 through July 10.

The show makes a very strong impact. Although the titles are somewhat awkward (“We came from an ancient land with a dream of riches …”, “We settled here, laboured and our communities grew.”, etc.) and the contemporary photographs are much less interesting — and seemingly less relevant — than those made before 1950, the images are well chosen and well utilized and the text supports and augments the imagery in appropriate fashion.

As one might expect from a collection of this sort, the pictures are by turns charming, stiff, poignant, descriptive, commonplace, graphic and sometimes appalling. The text (in English, Japanese and French) also varies, from naive idealism to toneless narrative to chilling indictment. A good example of the latter is the following excerpt from an interview with Buck Suzuki:

I’ve had debates with people that piously talk about ‘what a horrible thing it was that happened to you,’ to happen to all the Japanese. I say what the hell are you talking about? You’re about the same age as I am. I say, what did you do at that time? You were living in this area. You went and took part in it. You were part and parcel of it. You were part and parcel maybe by being silent and not speaking against it. [1]

One can review both exhibit and book simultaneously (the book, although poorly reproduced, is virtually a complete catalogue of the show) by noting and commenting on the finer images — which are very fine — and discussing the finer points of text and context, format and design. Yet to talk about this collection of words and pictures in critical terms alone does not seem entirely correct. This exhibition was assembled for a specific reason: to make viewers and readers aware of the experiences of the Japanese in Canada, the extent of the injustice done to them as a result of government actions between 1942 and 1949 and the fact that although things seem to have returned to normal some years ago, all is not completely finished. The show pointedly includes many newspaper clippings about the aftermath of the World War II relocation and the clippings — which are reinforced by articles that have appeared elsewhere as recently as May of this year — make it clear that “unlike the Japanese in the United States, the Japanese-Canadians have yet to receive formal apologies or legal redress ….”[2] A brochure accompanying the show speaks equally plainly: “The enabling legislation that destroyed the liberties of over 22,000 Japanese Canadians in 1942 was merely the culmination of a prevailing attitude of intolerance toward immigrant people. Both the attitude and the legislation, the War Measures Act, remain with us today.”

It seems appropriate to give thought to this issue at a time when the Nazi persecutions of World War II are being packaged as entertainment and relentlessly flogged by the television and film industries: witness Holocaust, Mephisto, Our Hitler, Sophie’s Choice — even Das Boot is representative of the same syndrome. The publishing industry also is getting into the act, as demonstrated by the recently-released The Auschwitz Album, a collection of concentration-camp photographs presented in a fine-photography book format (!) or the fact that other books on Nazism still appear at a frightening rate. [3] In the context of this media epidemic of material about one aspect of the war, it is fitting that A Dream of Riches: The Japanese Canadians should be given a major showing this year, for the statement it makes about another result of intolerance and prejudice during the same war is a lot more real — and a lot closer to home — than the experience could ever be of watching Meryl Streep with a short haircut move around a movie-set concentration camp.

Obviously one cannot too specifically compare the Canadian government’s treatment, no matter how shameful, of the Japanese Canadians with what happened to the Jews in Europe: the orders of magnitude do not mesh. But it is only right that acknowledgment should be made and recognition should be given, and A Dream of Riches makes a strong case for both. And it does so without fiction, without artifice, without advertising — and surprisingly, without rage.