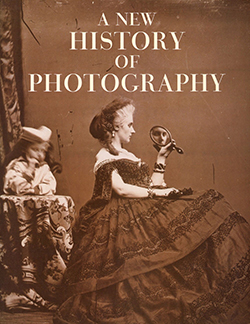 A New History of Photography is the brave title of Michel Frizot’s massive new work, published originally in French but now available, at a greatly reduced price, in an English-language version. Published by Konemann in Europe and now distributed in North America, this book makes a significant addition to the literature of photographic history, and it was mentioned briefly in the last edition of this newsletter.

Because of its size and scope, it immediately enters the field as a canonic work. The most ambitious photographic history published in the 1990’s, it appears to have everything: a new perspective, a remarkable list of contributors, many reproductions of new and less-familiar images, enough references to landmarks of photographic history to establish a sense of authority and scholarship, and good timing. Here is a book that arrives with an impressive pedigree, and one that has virtually no competition in terms of recent releases.

Let’s look at these aspects in more detail. The perspective is new: the work is divided into forty-one chapters which form the overall narrative, and the chapter divisions are intriguing.

Frizot himself contributed the Introduction, the initial and final chapters, and eleven others. The remaining chapters are essays by, among others, Francoise Heilbrun, Sylvie Aubenas, Peter Bunnell, Ian Jeffrey, Fred Ritchin and Colin Westerbeck. Each chapter or essay deals effectively with its stated theme and is well-illustrated; many chapters have “Dossiers,” brief portfolios of representative imagery, at their conclusion. Specifics of time and place are well attended-to; critical perspectives are insightful and intelligent; chronology and technical advances in the medium are always at least properly referenced. Frizot stated that his aim was “to undertake a history of photographs considered as working objects in their own time, over the century and a half since photography first made its appearance,” and he went on to point out that this approach “cannot be … an evolutionary sequence. It demands instead an archaeological approach, [which identifies] the strata and establishes a language of the typology of photography…”

Does the archaeological approach work as well as it should? Sometimes yes, sometimes no. Francoise Heilbrun’s essay, AROUND THE WORLD: Explorers, travelers, and tourists, is distressingly brief, as is Sylvie Aubenas’ THE PHOTOGRAPH IN PRINT: Multiplication and stability of the image, especially in view of the importance of these two subject areas during photography’s first century. On the other hand, Peter Bunnell’s contribution, TOWARDS NEW PHOTOGRAPHY: Renewals of pictorialism, is expertly and admirably concise given the familiarity of this period and much of the work generated during it; and Bunnell has blended, with great taste if not good design, familiar and seldom-seen images. Ian Jeffrey’s THE WAY LIFE GOES: Suffering and hope, is beautifully written, accurate, unsentimental, well-illustrated, and followed by a pleasant surprise, a dossier of work from The anonymous studio. Fred Ritchin wrote CLOSE WITNESS: The involvement of the photojournalist, which does not fulfill the promise of its title – most of the chosen images are middle-distance photographs, the text is curiously uninvolved, and Ritchin hints at the problems now facing photographic reportage, but doesn’t develop his own theme to any useful extent. Colin Westerbeck does a better job with some of the same ideas in ON THE ROAD AND IN THE STREET: The post-war period in the United States, and as the book moves into its discussion of contemporary work there are a number of interesting variations on supposedly established themes: Shelley Rice’s treatment of The subjective vision, Frizot’s chapter on THE SENSITIVE SURFACE: Photographic substrate, imprint, memory (can you imagine a chapter title like this in the Newhall history?), and Yves Michaud’s FORMS OF LOOKING: Philosophy and photography. The book ends, a bit haltingly, with Frizot using the theme of ritual and custom, photography and memory, as a way of summarizing all he is trying to do.

By contrast to the best writing of individual contributors, Frizot’s prose is for the most part awkward, and often rambling. It gives the impression of a less-than-ideal translation from the French, and an over-reliance on academic conventions of expression. In the first part of the book, this is a real problem: we know some of this history already, and we wish Frizot’s new perspectives were better expressed and more compelling to read. The problem is exacerbated by the garish brown inks used to approximate – in essentially one shade – the manifold beauties of many 19th century print-making techniques. On the other hand, in sections on contemporary work we can easily accommodate a rambling archaeological expedition, through material which is newer, less “known,” and certainly less fixed in the ways in which it has been categorized. A chapter like THE SENSITIVE SURFACE, referred to above, may not make sense in terms of the linearity of its thought, but where else can you see work by Dieter Appelt, Joel-Peter Witkin, Jan Dibbets, John Hilliard, Richard Long, Christian Boltanski, Robert Smithson, Denis Roche and Cindy Sherman along with Andy Warhol’s Orange Car Crash and an Anselm Kiefer book cover, all in the same chapter?

So the best way to use this book is not to read it, start to finish in predictable fashion, but to use it. If the critical approach taken by the text is an archaeological one, it’s perfectly fair to treat the book as an archaeological site to be explored according to one’s own interests and preferences. For those who like to meander through history rather than plow through it chronologically, A New History of Photography provides a very rewarding experience. Ideally, this experience would be supplemented by reference to a more structured history – probably Naomi Rosenblum’s book is the ideal companion volume to Frizot’s – but if only one history fits into your budget, at its current reduced price Frizot’s work is indispensable: a fine effort, not definitive, but never less than well-intended.