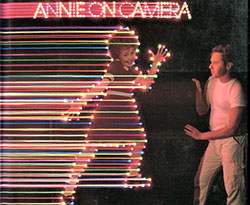 
Ours seems to be an age of new art forms, new equivalents and new miracles: recent years have seen, among other things, the birth of the ‘non-fiction novel’, the emergence of the ‘moral equivalent of war’ and the creation of ‘the exposure meter that conquered Mt. Everest ‘. With the publication of Annie on Camera, however, we have something even more remarkable — the intellectual equivalent of E.T. Bubble Gum.

This volume purports to take itself seriously. It has a lengthy essay by Anne H. Hoy, who earned an M.A. in art history at New York University, and it contains beautifully reproduced work by nine photographers (Neal Slavin, Jane O’Neal, Stephen Shore, Garry Winogrand, Mitch Epstein, William Eggleston, Joel Meyerowitz, Robert Walker and Eric Staller) who photographed on and around the sets and locations of “Annie” during the making of the film. We are told, in an introductory statement, that the book “springs from a brief and brilliant marriage between two art forms … the Hollywood musical and vanguard photography” and at every turn we are confronted with more breathless prose, but the book leaves one with the unfortunate sensation of having just read an American Photographer gossip column that somehow ran amok.

Consider the following items. Established and lesser-known photographers were chosen for the book to “make a yeasty blend of interacting generations”; the large number of images of John Huston is explained by the fact that Huston “has a face as expressive as a van Gogh shoe”; and the author’s pronouncements about style and technique in photography are backed by references to “such widely recognized art photographs as Ansel Adams’s [sic] transcendental Yosemite and Edward Weston’s Platonic peppers” or statements like “Marie Cosindas’s [sic] Polaroid portraits demonstrated that with enough vision, care, and filtering, the amateur’s tools could even be made to produce Old Master photographs.” Ouch.

It gets worse. A photograph of Albert Finney by Jane O’Neal is described thus: “O’Neal took the evocative photograph of [Finney] on Page 61 just after this rehearsal, in what appears to be an implosive moment of thespian concentration, preparatory to his playing a scene of awakening susceptibility to the blushing Grace. In fact, Finney was simply catching his breath. But such is the force of her images that one wants to weave a tale.” Mitch Epstein’s photographs generate the following by way of critical observation: “Light is also a subject of Epstein’s pictures: the blitzkrieg lighting of night filmmaking and the huge hulking humanoid arc lamps that steam it into the sky, the ceiling, or the weeds. . . . These lights, coiled with cables like Star Wars Laocööns [sic], dwarf Ray Stark and John Huston on their brocade sofa on page 107, while the two old friends . . . continue their quiet discussion indifferent to the visual chaos.” And Joel Meyerowitz’s working methods are explained thus: “The agile hand camera lets one track a subject and records that picaresque pursuit in collisions of forms and gestures caught on the wing… . The 8×10 in. camera, however, is literally rooted: Meyerowitz’s Deardorff weighs forty-five pounds and requires a tripod. The image that appears on its lens, in the dark under the black cloth, is upside-down and backwards, divided by a grid of hairlines.” Well, most of us used to think that an image appeared on a view camera’s ground glass . . . oh, well. The last sentence in the book gives us a little reassurance: “Or so it goes in the movies.”

The photographs themselves are pretty much what one would expect. A Neal Slavin group portrait makes its appearance, along with several studies of sets and cast members by Stephen Shore; there are tricks with lights, star filters and long exposures by Eric Staller as well as slightly melancholy room interiors by William Eggleston and so forth. Garry Winogrand is the real star of this group, providing thirteen photographs that are by far the finest and most original in the book. One shot in particular, of John Huston cutting up in front of cast and crew members, says as much about the director and about filmmaking as any image or chapter in the book. Even the quality of Winogrand’s work, however, cannot get the critical text off the ground (“Uninterested in what was said, what happened next in the vignettes he captures, Winogrand refuses the photojournalist’s old role as storyteller, though his flash and Leica and his speed and ubiquity are crucial to that athletic profession.”) — one could go on and on. Spend your money if you have to — but don’t say you weren’t warned.