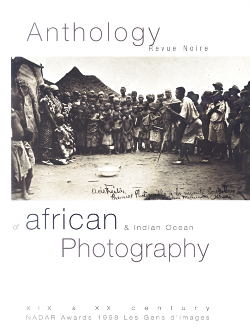 Most of us don’t know a great deal about photography in Africa, and much of our mental image of the continent itself comes from pictures made on assignment, by photographers who do not live there. So the work collected for Anthology of African & Indian Ocean Photography is incredibly informative, and the way it has been researched and assembled is thorough, helpful and clear. Revue Noire’s project leaders start with a very direct summary of their working premises:

As a first general exploration of the photography of a continent – the African continent, excluding Mediterranean Africa but including the Indian Ocean — its sole aim is to achieve an initial gathering together of photographs. It in no way sets itself up to be encyclopedic…. The book comprises a collage of views, analyses and condensed research….

We do not attempt to define what African photography is, or present it as homogeneous… the intention is to include all the techniques and forms of artistic expression that have been represented on the continent, making no assumptions about an African style or specific African identity.

Over the next 425 pages, nine chapters and numerous essays illuminate the beginnings of photography in Africa as an offshoot of colonialism, the development of portrait studios and their later decline (thanks to the arrival of colour photography, minilabs and other forms of low-overhead picture-making), “The Awakening of a Vision”, the rise of local reportage and African picture agencies, and an overview of recent and contemporary African photography in its many manifestations. Sections are included on Mauritius, Madagascar and Reunion, all in the Indian Ocean, as well as a chapter entitled “Diaspora”, which shows work by African photographers now living in France, Cuba, the United Kingdom, Canada and Brazil. There is also a brief section on photography by African-Americans in the United States, and the book concludes with biographies of the photographers represented and a short bibliography. This is a huge project – it includes 500 photographs from 1870 to 1998 — for which Pascal Martin Saint Leon and N’Gone Fall, its directors, deserve great credit.

Portuguese Photography since 1854: Livro de Viagens — (“book of travels”) — is likewise very informative, although smaller in scale than the Revue Noire publication. It also addresses a relatively unfamiliar subject; and Portugal’s history as a colonizing nation intersects with the history of Africa and Brazil in ironic ways. As the introductory essay (by Maria do Carmo Seren) points out, “…Portugal did at one time become an amazing nation, a ‘great’ nation: seldom, with the possible exceptions of Macedonia and Rome, has a people, starting from so little… acquired such an obvious right to be considered ‘great’.”

But just as African nations laboriously won independence, Portugal and other colonial powers faced the loss of their empires. Livro de Viagens contains no photograph representing the sheer joy of celebration such as Independence Day in Zimbabwe, reproduced on p. 222 of African & Indian Ocean Photography; rather, it is suffused with tones of an idealized past, and themes of past exploration easily become representations of present-day wandering and uncertainty. This is particularly apparent in the final section, which shows work by Augusto Alves da Silva (from a video installation), Helena Almeida (whose imagery is reminiscent of John Baldessari), Manuel Valente Alves (diptychs combining photographs of natural forms with geometric line drawings), and Jorge Molder, whose photographs express ambiguity and self-doubt in elegant and intriguing ways. The best work in Portuguese Photography since 1854 is in the middle, roughly from pp. 106 to 147, which seems most concerned with photography as picture-making, and least occupied with the grouping of images for thematic reasons.

It may be that this publication does not do justice to the exhibition on which it is based, which was created for the 1997 Frankfurt Book Fair, and edited jointly by M. Tereza Siza and Peter Weiermair, Director of the Frankfurter Kunstverein. Weiermair’s preface seems to speak of a different vision for the project than Siza’s Introduction, which helps explain some of the structural imbalances in the book; despite these imbalances, however, the best work represented here is fine indeed.

Wonderland, the third of the anthologies being reviewed in this issue of the Newsletter, is the least oriented toward history and nationality, and the most concerned with photography as the making of pictures for purposes of personal expression. It represents, in the words of guest curator Machiel Botman (who worked with Wim Melis and Ton Broekhuis, organizers of Noorderlicht ’99), “…the sort of photography that I hold dear: the ‘other’ photography, often small and personally tinted… Where ‘real’ comes before ‘beautiful’ and where photographers are the authors of their own books.” This theme is reinforced by Melis: “The binding element between the photographers in Wonderland is their fascination for life itself, with all its complex structures and human relationships….”

Thirty photographers are included in this collection, and the selection of work spans four decades. The book is beautifully designed and printed, well-sequenced, and completely convincing in its advocacy of “intense, unpolished photography that carries the viewer to a reality under the surface….” Among its highlights are selections of work by Christer Stromholm, Morten Andersen, Ken Schles, John Max, Johan Van der Keuken, Miguel Rio Branco, Serge Clement, and Dave Heath; William Eggleston and Lee Friedlander are also represented, although not as effectively as Heath, whose work forms Wonderland‘s closing sequence.

All three books affirm the role of photography — in human history, human culture, and human expression — serving once again to show us how fundamentally alike we all are, and how infinitely adaptable the photographic medium is. I enjoyed my time with them, and hope they reach a wide audience.