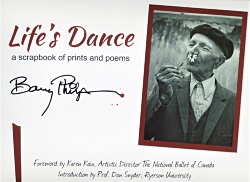 Photographs and words by Barry Philp

Barry arrived at what was then Ryerson Polytechnical Institute in 1955, studying photography with three of the program’s founders, Reginald Soame, Les Holmes and Geoff Bullock. He both excelled at his work and shook the place up. High grades earned him scholarships but alternated with hijinks: it was Barry who organized the Photo Arts “Damned if I Know” Marching Band, and who wrote and played the lead in the class play (which that year won the coveted “Eggy”, Ryerson’s trophy, from other, rival departments). He graduated in 1958 with four job offers, including one as an assistant to Karsh.

He chose the Peterborough Examiner, then published by Robertson Davies, and worked there as photographer, columnist and movie reviewer, moving to the Calgary Herald as a police reporter in 1959, and then to the Winnipeg Tribune as photographer in 1960. Two years later, he sent seventeen pounds of photographs with his application for a position at the Toronto Star – he got the job, of course, and photographed for the Star through 1968. While still full-time at the Star, in 1966 he also started teaching at Ryerson. Ryerson listed him as part-time faculty but actually gave him a full set of courses; in 1968 he figured this out and became a full-time faculty member. He taught at Ryerson for a total of 30 years, earning a BAA in 1981; his former students are spread all over Canada. During his last decade at Ryerson, he commuted from PEI, where he bought and refurbished a bed and breakfast, initially offering Elderhostel courses and Continuing Education programs, and where later he established Ryerson’s first summer intensive, a 12-week program equivalent to the first year.

In 2007 Barry moved back to Ontario, living first in Wellington (until 2010), then Perth (2010-2013), and more recently Picton, where he now lives, close to the lake. He traded his Fiat for a pickup, saying it makes for better conversation (“works better for Prince Edward County”), and he still writes and makes pictures.

Early photographs of Barry at work show a penetrating gaze, an animated expression, and a photographer willing to crouch, climb, leap, gesture or cajole in order to get a picture. Smiling or serious, he is always working. Boris Spremo’s image of Barry captures this perfectly: standing behind his tripod-mounted Topcon DM, he leans forward intently, steadying the tripod with his right hand, gesturing and directing with his left, totally focused on composing the photograph. Another perfect description, this one in words, comes from the announcement for a talk he gave in 1970 for the Professional Photographers of Ontario. They advertised the lecture this way:

His talk will be directed to – Portraiture on Location

He is a married man with 4 children. Works in the city and lives in the country. He is a working and teaching photographer at Ryerson Photographic Arts and has a real message.

The italics were added, but even without them, these three sentences describe Barry with the same insight (and summarize his passions with the same brevity) as Spremo’s photograph.

It would just be a matter of time until Barry’s work found its way from the printed page onto the gallery wall. Solo exhibitions started in 1968, at the Phase Two Gallery in Toronto, and continued at the Centennial Gallery in Oakville, the St. Lawrence Centre for the Arts, the Killaloe Art Gallery, and the Del Bello Gallery, also in Toronto, where Barry had several exhibits, both solo and shared, during the 1980s. Titles for these exhibits show a restless and inventive imagination: Big, 1968; Blow Up, 1970; Portraits of the Famous, 1971; Portraits, 1972; Valley Images, 1978; Quiet Passion, 1983; Iberian Images, 1984; and Pat. Pending: Neon Photographs and Electro-Mechanical Sculptures (with Jim Smith, 1985). Group and two-person shows, in Toronto, PEI and most recently (2009) at the Annex Art Centre have continued to be part of his creative activity, and in many respects have prepared the way for Life’s Dance.

Looking at this book as a retrospective, one can see the themes and visual ideas of his earlier work, teaching, and exhibitions finding new forms, and forming new sequences: about place, detail and circumstance; about moments and relationships. Imagination, light, shadow, presence and absence are also explored here, both in pictures and words. Barry uses words with pictures in much the same inventive manner as his contemporary, artist Richard Stine: assembling narratives from fragments, poems from memories and associations, collages from more complex poetic ideas. Titles of some poems tell us where the narrative is headed: Art of the Highwaymen, or Planting in the Back Country. But other titles don’t give much away, and introduce sequences that turn in unexpected directions: Red Slippers, or Who Took the Marmalade? No picture here is without a story, but some stories are given, and some need to be discovered. Barry seems to have found a perfect answer to the question printed inside the silhouetted head of a Richard Stine figure:

Some think it is good to think.

Others think it is better not to think. They think spontaneous is the way to be.

Deeper themes in the poems and the images have to do with family, with partners, and especially with the landscape and seasons, through which Barry travels, simultaneously as inhabitant and observer. But in another sense, the book is also a dramatic and political statement, and an affirmation of a set of beliefs.

Most of the final third of the book, beginning with the “Ballet” double exposure, is about performance: dance, music, theatre, or sport. Passion for performing is everywhere, the effort required is beautifully captured, and the movement and drama of performance itself is somehow right there, right in the pictures. There is no falsity, no empty symbolism, just complete commitment: from the performers, absolutely committed to what they are doing, and from the photographer, totally absorbed in recording their work. Performance is life, the photographs tell us, and life is especially a dance.

Life is also a political dance: when you have to be what you aren’t (You Have To! The Social Dance), when one culture encroaches on another (Amigo… Where has old Havana gone?), or when the Balloon Boy tells us, “Hot air floats/politicians know it/some preachers too…” The one thing Barry cannot stand is hypocrisy, and the scarecrow at the Last Duel Park speaks directly for him: “Hey Steve quit playing/with your wife’s panda/and bring me some straw…” Like the sudden insertion of the words “This is a political film” into the middle of Jonas Mekas’s film, Zefiro Torna: Scenes from the Life of George Maciunas, “Hey Steve” jolts us awake. Life is a dance, but if you can’t or won’t dance, or if you are manipulating people rather than inspiring them, you should not be on stage. Few photographers have expressed this as vividly – or as concisely – as Barry. The beauty of this book is that he can say all this, and still bring the reader with him on his journey – one where even a word of greeting is a poem in itself.