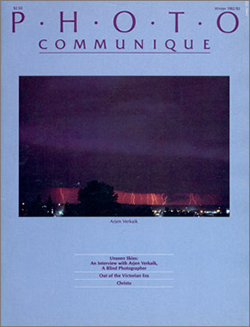 
B PNTME BEKA (Rhythm of an Era)
Photographs by Izvestia Correspondents

Roughly translatable as “Rhythm of an Era”, the recent Soviet publication B PNTME BEKA is devoted to some seventy-five photographs by Izvestia correspondents, and contains at least one example of every important cliche about ‘the good life in the Soviet Union’ that the Soviet press has cranked out and sent abroad. Because of the patent falsity of its relentless optimism, the book is an easy target. As information it is close to ridiculous. Every photograph shows people who are happy, busy, eager to learn, proud of Soviet accomplishments, healthy, modern and productive; the land is rich and beautiful, the armed forces are strong, the factories and cities are energetic, the athletes are vigorous, the mix of cultures and ages is vital and free of tension or conflict — in short, one would get a much more accurate impression of the way things really are in the Soviet Union by looking at U-2 or spy satellite photographs. As photography, it is neither inspiring nor awful: most of the pictures look like they were made by Margaret Bourke-White clones, which is probably interesting if one has never seen her work, but a bit alarming if one has (the copyright date of his book is 1981). As a book — well, the reproductions are quite varied in quality and the layout and design are uniformly artless.

This is the best that now comes out of the nation where War and Peace was written? No wonder Solzhenitsyn is a recluse in Vermont and Nureyev was overjoyed to finally get a Swiss passport. One wonders how many frustrated photographers there are in the Soviet Union and what they might accomplish if they were permitted: some of the images in this book show skill, imagination, involvement and even humor underneath the rigidly programmed subject matter.

One could go on in this way at some length, but to do so would be to miss an important point. Everyone knows that when political concerns control the arts or the press the results are predictable and disastrous, and most people assume that communist and totalitarian nations represent the only flagrant or really unfortunate examples of this sort of control. And yet the citizens of Ontario still acquiesce to the decisions of film censors, the voters of Canada still elect and re-elect officials who allow public money to be used for government advertising, and the U.S. government continues to pay for the making of propaganda in the guise of information (some extreme examples can be seen out of context in the recent film “The Atomic Cafe”) — so the North American democracies are not above the very same abuses of the creative impulse that make B PNTME BEKA such a useless volume for anyone who is looking for real information, objective truth or individual expression. These practices are even less excusable here than in the Soviet Union. A book such as this should remind its viewers what the consequences can be should they be ignored on a large enough scale; in addition to criticizing, one should also take note.