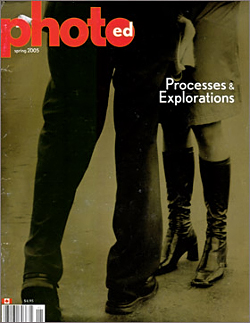 The practice of this beautiful art must not be condemned because it contains a few seeming contradictions; for if it was easily acquired, and always certain of success, there would be no incentive to excellence, and those persons who possessed only a limited taste and experience, could rival the artist in the creations of his genius. It may therefore be deemed a fortunate circumstance… that the road to success lays through a few rugged passes, and he who would reach the goal of perfect accomplishment must encounter some difficulties.

– from N. G. Burgess, The Photograph Manual; A Practical Treatise, 1856

The practice which so intrigued Burgess was that of the ambrotype, patented two years earlier by James Ambrose Cutting of Boston. Cutting was born in 1814 and his family tried to earn a living as farmers in southern New England; his first invention was a new design for a beehive, which earned him enough money to move to Boston, where he soon went broke, but later took up photography. Sensing the limits of the Daguerreotype and capitalizing on Frederick Scott Archer’s development of the wet collodion process in 1851, he and his partner Isaac Rehn brought the unpredictable art of wet-plate portraiture to a point of commercial viability between 1852 and 1854. Four years later, Cutting was granted another patent, this one for improvements to the process of photolithography. Apparently never losing his interest in the natural world, he also designed fish tanks, and in 1859 he helped found North America’s first independent aquarium, the Boston Aquarial Gardens.

The process which echoes his middle name (most sources say the term ambrotype was derived from the Greek word ambrotos, meaning immortal or everlasting, and some claim Cutting gave himself a middle name only after the process was patented) was popular for about two decades, but its “seeming contradictions” eventually led to its demise; by the late 1870’s, negative-positive printing systems were much improved, and gelatin emulsions and dry plates were increasingly available. An ambrotype, or collodion positive, is formed by coating a glass plate with a solution of wet collodion and potassium iodide, sensitizing the plate with silver nitrate, and exposing, developing, fixing and washing while the collodion remains wet. An underexposed image, viewed against a dark background (or made on ruby glass), appears as a positive, and a good one has a lustrous quality which remains remarkable, even in an image-saturated world. As photographer Sally Mann put it (in an interview with Lyle Rexer in his book Photography’s Antiquarian Avant-Garde): “In the face of some extraordinary sight or place, you fashion an object, you do not just take a picture.” And Rexer’s response expands on this idea, in language quite similar to that used by Burgess: “The effects and accidents that entrance us today—the swirl of the background from the pour, the white skies, the flaws and comets—were a nuisance, a limitation, a commercial disaster. What they once endured of necessity, we now employ as art.”

It seems only natural that more than a century after the ambrotype fell into disuse, a revival of interest in historical processes began, and that this revival continues to expand in the digital era. Both photographers in this exhibition (who learned to make ambrotypes from 19th-century specialist Mike Robinson) have commented on this phenomenon, discussing their dissatisfaction with the more routine and mechanized aspects of photography and their fascination with the unpredictability of the ambrotype. “I didn’t enjoy printing on paper,” Rob Norton said. “Black and white didn’t do it for me, I preferred to shoot color slides; I loved the light and the luminosity. When I enlarged a slide onto an ambrotype plate, it really came alive, and the combination of processes seemed completely unique.” Maayan Kasimov spoke of a fascination with jewelry and hand-made artifacts, and a sense that “collodion could be the process to make photographic artifacts… once I started printing, that was all I wanted to do, I knew that was it. I had always liked the sense of drama in Elizabethan portraits; they were not at all casual, but showed something quite definite about the subject. This influenced my way of shooting, and the ambrotype process just seemed like the best way to carry out my ideas.”

Discussing his series, Rob said that “After the first plate, I could see something growing—I felt I could make a series out of this. The focus and framing worked well, and an underexposed slide really sings as an ambrotype—it changes your perception, of light and everything else in the picture. In this series I’m exploring the fragileness of relationships, and the missing information in the images hints at this fragility. Everything is built around this idea, and the fragility of the ambrotype glass is as much a part of the statement as the delicacy of the image itself.”

Speaking about her photographs, Maayan said, “I am not too interested in a lot of contemporary photography, I am attempting to avoid that… I’m leaning toward something more classic and traditional, and painting has been a primary influence, especially in the portrait tradition where my interests are wide-ranging and include Balthus and Gerhard Richter. I’m trying to do a series of portraits of people with animals, but true portraits, shot in a different way, and looking in some ways like paintings, or at least referring to the same aesthetic.”

In Norton’s photographs, the contemporary language of oblique framing and selective focus combines with the evanescent appearance of the collodion image to suggest the impermanence of relationship; in Kasimov’s, the framing derives from the portrait tradition, and the relationships described are the age-old ones between humans and animals: the light reflected off her plates seems more stabilized, yet the process she uses is the same. Few, if any, contemporary processes are so adaptable, or so accommodating of opposites: again, the “seeming contradictions” of this remarkable process perfectly frame, and perfectly reflect, the impermanence and lastingness, fragility and strength, and visible or invisible magic of the relationships these photographs explore.

A selection of images from this exhibition, with an accompanying article by exhibition curator Alice Dixon, has been published in the Spring, 2005 issue of PhotoEd.