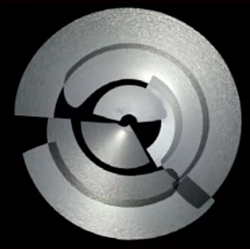 Never one to stand still, Pierre Tremblay always makes images that move. In his earliest photographs, colored bars and lines were added; as they danced from one frame to the next, a sequence would form, seemingly of its own accord. When he began working with digital imagery, his photographs made the static bronze or plaster forms of Rodin sculptures appear to breathe, adjust position, or even gaze back at the viewer. Video and computer graphics were logical next steps: a portrait became a spoken sentence, filmed in shifting color and light and playing back on one, four, or even forty or fifty screens. Tremblay is now experimenting with multi-channel video and ever-different ways of rendering images and sound in motion.

Continuum, completed in 2004, is a seven-minute work in ten parts. Tremblay describes it as “a landscape in motion… it deals with nature in an urban environment, the cycle of the seasons, perception, with seeing multiple moments at once….” Filmed on or near the bluffs that overlook Lake Ontario east of Toronto, it was made as the artist walked, rode a bicycle, or panned across the horizon from different viewpoints and at differing times of the day and the year. Relying on a color scheme that uses primarily blue, silver, gray, green and brown, it uses the black of the screen as a ground, and sometimes a visual accent. Sound is provided by the wind, birds, water, traffic, and the noise of a bicycle wheel on gravel.

Each section has its own geometry and its own movement. At first, broken concentric circles show water and sky, forming an image like an eye; we hear wind and water. The circles next become fragments: trapezoids and polygons show the landscape at water’s edge, and the sound of birds punctuates the flow of video images. In the third section, shifting horizontal bands re-focus the viewer on the horizon; in the fourth, a kaleidoscope of circles forms as the camera moves along a bicycle path and we hear noise like traffic. The fifth section returns to the water’s edge, where overlapping rectangles provide a view of the lake’s expanse seen through patterns of branches and brush. The sixth part continues to show water through trees, this time from vantage points whose positions are constantly changing.

Part seven shows the landscape as frames within frames, first four, then six and seven. The eighth segment breaks the image down further: smaller frames are windows on the trees and water, as we see and hear the breaking waves. Part nine returns to a circular motif, half-circles this time, rotating and overlapping. And like a photomicrograph of cells dividing, the final part of the video shows the landscape as a series of amoeba-like forms, which come together, separate, and eventually disappear.

The work, for all its movement, has an intensely meditative quality and seems infused with a strong sense of personal meaning; Tremblay skillfully blends elements of the personal with elements of abstraction, much as Woody Vasulka did in his extended video works, or as Luc Courchesne does in his recent installations. With repeated viewing, it brings renewed insight, revealing the many subtleties of its structure without ever compromising the directness of its vision.

In Tremblay’s output, Continuum might be thought of as a kind of median work. It evokes the stillness of a photograph, yet is completely grounded in a sense of the world in flux: we are looking, quietly, at images of the world’s activity. After seeing these images, so poetically rendered, one has a sense of better understanding what T. S. Eliot referred to when he wrote:

…under the running water

At the still point of the turning world.