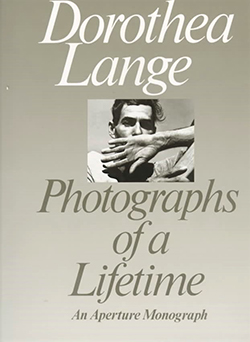 1983 – Dorothea Lange: Photographs of a Lifetime


Dorothea Lange: Photographs of a Lifetime is a book with impeccable credentials. Lange’s place in twentieth-century photography is acknowledged without question; the book, an Aperture monograph, draws on the huge Lange archive at the Oakland (California) Museum; the photographs were reprinted from the original negatives specifically for this project (with duo-tone negatives made by the incredibly skilled Richard Benson) and are presented along with excerpts from Lange’s own writings; the introductory essay is by Robert Coles.

One rather naturally, then, expects a great deal — perhaps too much. But in important respects the book falls short of its potential. Robert Coles’ essay, although engaging and well-written, is somewhat diffuse and rambling and Coles includes far too much material from his own life and work, particularly in dealing with the issues of social investigation, the meaning of documentary and the purpose of reportage. His remarks are interesting, especially when he writes about the self-perceptions of those being documented, but they are not always relevant. And there is virtually no examination of the central issue of why Lange’s photographs communicate so effectively. These are, after all, images; Lange was possessed of remarkable gifts as a photographer; it isn’t accurate or fair not to examine her work to at least some extent in visual terms. Lange’s success was not simply due to the Great Depression and her natural instincts toward the people affected by it. She was also an artist with a thorough understanding of the expressive qualities of posture, gesture, expression and position as the real revealers of a personality or clues to a situation or an event. Her ability to use these elements to make great photographs remains her central achievement, particularly in an era cluttered with meaningless “documentary” images, and is far more important than many of the aspects of her career to which Coles devotes so much space.

The actual selection of photographs draws very heavily on the work reproduced in the Museum of Modern Art’s 1966 volume, Dorothea Lange, published to accompany a major Lange retrospective; unfortunately, there are some problems here as well. The Aperture book contains sixty-three of the eighty-eight images in the earlier monograph, often in the same order; for the most part these are the best known of Lange’s photographs. Although this book includes 112 large plates and many smaller reproductions, providing interesting material for a comparison of Lange’s treatment of the same or different subjects, there is a strong emphasis on her documentary work to the exclusion of her early portraiture and some later, more personal images. So while there is additional work, better reproduced here, the Museum of Modern Art’s much more modest publication is more truly representative. This is ironic, for obviously a great deal of research, care and effort has gone into the current volume. This effort has produced a fine book but not a definitive one; and Photographs of a Lifetime is not really an appropriate title given the omissions and duplications mentioned above.