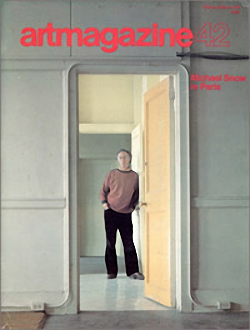 The book makes an immediate impression. The problems that plagued early 4 x 5 Polaroid color materials (unpredictable color shifts, inconsistent emulsion speed, awkward tone reproduction in very high or very low contrast light) and the first SX-70 film (which until recently was even less predictable than the original 4 x 5 Polacolor) have been reduced to acceptable levels or eliminated in this new 8 x 10 emulsion. The photographers were carefully chosen to give a broad spectrum of image styles and demonstrate the new film’s versatility, brilliance, and color fidelity as effectively as possible. And the photographs are superbly reproduced. Printed on 6-color presses from laser-scan color separations, the reproductions represent state-of-the-art color printing in North America at this time.

Faces and Facades begins with Elisabetta Catalano’s photographs of Italian film directors: pleasing studio portraits made by electronic flash, with the subjects posed simply in front of seamless backgrounds. While these are skilful images, many fail to engage the viewer more than momentarily — a very interesting portrait of Federico Fellini excepted. Polaroid’s choice of a disconcertingly smug Franco Rosi as one of the portraits reproduced on the book jacket seems somewhat curious; it is not spontaneous enough to work as a snapshot, and not subtle enough to be a really insightful portrait.

Catalano’s work is followed by three Stephen Shore images, made in Europe, and possessed of the grace and poise one has come to expect of Shore’s large-format color work. An image of six empty chairs in front of a swimming pool in southern France is particularly fine. One regrets that more space was not given to Shore, who is a remarkable photographer.

Alma Davenport Dailey, a young photographer from Rhode Island, is represented by three manipulated collage photographs. Many photographers are exploring the visual and symbolic possibilities of collage, hand coloring, combining snapshots with contemporary images, and the like, so Dailey’s themes are not entirely original. There is a pleasant nostalgia to her work but one image would suffice; the second photograph seems an overly obvious statement about widowhood, the third an awkwardly colored “lost childhood” generic image.

Carl Fischer’s work should be recognized by anyone who has followed Polaroid’s publicity campaign for 8 x 10 Polacolor, and his one image is beautifully sleek. Likewise Reinhart Wolf’s images have been seen in the company’s posters and brochures. His photographs of rural Georgia are subdued and very beautiful, but they lack the authority of Shore’s best work and are not well presented here. A brilliant blue border around two very still images is overly jarring, and the sequencing and sizing of the pictures seems arbitrary.

Christian Vogt’s figure studies owe a clear debt to Magritte, but in spite of this are quite successful. An image of a dark-skinned man holding a red cloth in front of his torso is especially strong. The man stands in a dark, ambiguous space; his head is not shown and a mirror on the floor reflects part of the red cloth. A tone resonance is set up between the red cloth and the background (dark green-brown) that is remarkable, particularly when viewing the book in subdued light. Ulrich Mack, another European photographer, is represented by landscapes which deal with flatness, distance, horizon, explicitly stated vanishing points, and saturated color. These are good images, reminiscent of work by landscape-as-sculpture/landscape-as-concept photographers such as Lewis Baltz or John Pfahl. Mack’s portrait of a middle-aged couple in front of their cottage is not as effective as the images that precede it and seems like an after-thought.

Peter Jones’ blue/red figure-ground studies (done with models and body paint) are startling. They possess some of the same color resonance as Vogt’s best work and much of the sleekness of Carl Fischer’s images. Like many of the photographers in Faces and Facades, Jones also owes a stylistic debt: his is to Eikoh Hosoe’s “Embrace” series of photographs. Even so, the pictures are unusual and the blue and red tones the film gives are little short of incredible.

Paul Huf is represented by two fashionable, slightly decadent haut monde photographs. One is a disturbing portrait of a man dressed in white (baggy satin pants, white shirt, white jacket with heavily decorated shoulders and wrists) holding himself in a too-controlled posture in a too-skillfully-decorated interior; the other is a shot of a model, draped in plastic, standing in a hard-to-define high-key space decorated with plastic, clear glass balls, white garlands of artificial flowers, and made more ambiguous with mirrors.

Many other photographers have work reproduced in this volume. Yousuf Karsh is represented by a portrait of Arthur Fiedler; Arnold Newman, by a portrait of photographer Eva Rubinstein (not one of his best); Inge Reethof, by a flower still-life; Gunter Sachs, by two mediocre shots of nearly-nude women; James Bones, by three large-format landscapes (in the tradition of Eliot Porter and Philip Hyde). Marie Cosindas has two photographs in Faces and Facades, but her work is disappointing. She was one of the first photographers to draw widespread attention to the expressive possibilities of 4 x 5 format Polacolor, but her recent work suffers by comparison to the images that appeared in Saturday Review and on the walls of the Museum of Fine Arts in Boston a dozen years ago. Her still life is overly busy, her one portrait quite stiff, and both pictures lack the painterly color of her early work. Finally, Ray Belcher is represented by two photographs, one of which (a view of a bridge over the Rio Grande at dusk) is very well done.

In the long run the very elements that make Faces and Facades so impressive at first glance contribute to the fact that the book does not stand up well to repeated viewings. The selection of photographers does encompass a wide variety of approaches to 8 x 10 color, with the result that a tantalizing number of uses for Polaroid’s new film immediately suggest themselves to any viewer with a knowledge of large-format technique. But the book does not have a real stylistic or thematic focus. While one can put different, even unrelated work into an exhibition and still arrange a presentation which will form a coherent whole, any lack of continuity or unity in a book can pose a real problem. And both Polaroid and the represented photographers “play safe” too much of the time. There are more derivative images in Faces and Facades than there should be, especially given the talent involved. Too many photographers adopt themes or stylistic devices from other photographers or painters, and three — Cosindas, Karsh, and Newman — end up almost imitating themselves. Polaroid as a corporation scrupulously avoids taking any real risks, as they might have by supplying 8 x 10 Polacolor to photographers such as Lucas Samaras, Les Krims, Robert Cumming, Linda Connor, Ed Ruscha, Paul Diamond, Guy Bourdin, or Berndt and Hilla Becher and then publishing some of the results. Krims and Samaras have done powerful and provocative work with SX-70 images. Robert Cumming and Linda Connor both use large format cameras, as do the Bechers. Guy Bourdin, Ed Ruscha, and Paul Diamond could doubtless do strong work with this material. Their results might be more controversial, but they might also be more stimulating.

This last issue — playing it safe — is interesting. Corporate sponsorship of the arts is probably inevitable in contemporary western industrial society, but corporate use of the arts for promotional or public relations purposes is another matter, and companies blur this distinction for their own convenience. Polaroid underplays its role in Faces and Facades to an amazing degree: the words “Polaroid” and “Polaroid Corporation” don’t even appear in the book until the last two pages; much more emphasis is given to the book’s credentials as art (via biographies of the photographers, and introductory essays by Fritz Gruber and Peter Bunnell). But while the company would like the viewer to think otherwise, the book is as much a corporate promotional publication as any Annual Report. It contains photographs instead of sales figures, but its purpose is no different.

This is true partly because of the way in which Polaroid either commissions photographers to create work with its materials or gives support (in the form of materials or purchases) to photographers who approach them with non-commissioned Polaroid images, and partly because the book was conceived as a catalog to supplement Polaroid’s exhibition program. This program is one facet of the company’s promotion, sales and public relations operations. A close reading of the “Afterthought” at the end of the book confirms this — Polaroid even states its “ulterior motive” for publishing this book. The irony is that a company as remarkable and innovative as Polaroid really has no need to be so coy about what it’s doing or so conservative in its choice of images for publication. Faces and Facades is a good promotional piece but it represents a missed opportunity and a subtle misuse of corporate influence. If the book is meant as art, it should represent the full range of possibilities of 8 x 10 Polaroid film, including uses which the company might not intend or might not be entirely happy about. If it is meant as advertising, it should make no pretense of being anything else. In its effort to be both, the book avoids taking any stand, exploring any new direction, summarizing any existing tendency, or presenting any radical imagery. The end result is a book that falls short of expectations because of its efforts to keep itself visually, politically, and corporately clean.