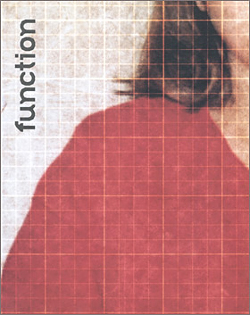 
This publication began as a conversation about possibilities. What made the conversation unusual was that it led to other conversations; what made it exceptional was what happened as a result. Individuals talking became an editorial board; ideas became a publication title; commitment became an interdepartmental venture; energy became a fundraising effort; and persuasiveness became a force that overcame all obstacles. Posters appeared; meetings were held; work was submitted, selected, sequenced and formatted; function – a student-run publication of images and writing – now exists.

It seems both right and appropriate that function‘s first issue celebrates Ryerson’s 50th anniversary and represents a new venture shared between two schools – Image Arts and Graphic Communications Management – in the University’s Faculty of Applied Arts. Its existence in hard copy and online versions, and its corollary exhibition at the Ryerson Gallery, say much about the expanding scope of activities at Ryerson and about the changing nature of all graphic media. And the fact that so many individuals and organizations have supported this venture is clear evidence that they think it deserves to succeed.

When the first photographic images were made, what attracted people to them was the appearance of realism. Since these images were formed directly by the action of light, and since they corresponded to visible objects and phenomena, they had a kind of authority that drawn images seemingly could not possess; and since the chemistry of photographic image formation was utterly new it seemed completely magical. Early photographs achieved the impossible, combining the perfec­tion of realism with the mysteries of a little-understood alchemy.

In what we call the digital era, what attracts people to images is often the subversion of realism. Digital images still require the action of light, but they no longer correspond to an externally visible world. Instead, they correspond – perfectly – to the binary digits that comprise and define each pixel. This perfect and perfectly adaptable correspondence is what gives the digital image its own particular sense of authority: what we see may not be real, but it has the finality of numbers. And since digital image processing is both new and little-understood, it has the same aura of magic that photochemistry once had.

The images reproduced here reflect both forms of practice, picturing the observed as well as the invented world, and doing so with a range of skills and expressive drives that would not have been possible in a single-medium context. One of function’s strengths is its lack of doctrine about what an image should represent, how it should be made, what reality it should correspond to, or what it should try to say. This refreshing lack of editorial restrictiveness, and the careful attention paid to the presentation of each individual’s work, ultimately make the publication a more effective vehicle for the images and writing that form its contents.

In a situation that emphasizes individual efforts within converging media streams, we may finally be approaching the end of an era of “isms” that have plagued art practice and art education for an unnecessarily long time. If historical and contemporary means of image recording are conceptual isomers of each other; if digital technology can facilitate the distribution of optical images while optical traditions establish parameters for the interpretation of digital imagery; if small organizations can self-publish for a global audience; and if all these contradictory tendencies can co-exist on these pages, we may not need to continually find categories for everything we do.

Artist and critic Alan Sondheim realized the truth of this some years ago while trying to find an appropriate title for an anthology of new work by contemporary artists. Wanting to avoid categories, he called his book Individuals; wanting to avoid narrowness, he wrote in broad terms about the creative process:

Works of art emerge out of a complex dialogue between self and society, individual concerns and the concerns of the “art world”….

The artist may choose to embed his or her work into the mainstream of contemporary art, which often results in a tendency towards formalism and the attempt to carry one particular aspect of already existing art “one step further.” But the artist may also choose to turn inward, to investigate the relationship between self and society, self and history…. The artist may choose to examine the position of the self in the world, [and] this examination can establish the notion of humanity, give it a ground….

Later in the same introduction, he emphasizes the cross-disciplinary nature of the work he selected as well as its emphasis “on procedure, on ‘going through the work’ as opposed to a perfected final product, or the revelation of process for its own sake.”

While Sondheim wrote before the digital age, his attitude about establishing “the notion of humanity” is particularly welcome during this age, and much of what he says applies to what the image-makers represented here are trying to express. function may have an abstract title, but it shows the work of many people, virtually all of whom are addressing the issues Sondheim outlines in very specific ways.

Since this publication did not become a reality without a great deal of effort, thanks are due to each contributor, for giving the publication its humanity and its content; to the editorial board, for forming a coherent publication out of the raw material submitted; to the many supporters of this effort, for their faith in the project; and to the schools of Image Arts and Graphic Communications Management, for their combined resources and expertise. Finally, a special word of thanks to Allan Lee, Chad Gerth, Barrett Brownlee and Aileen McMillan for their efforts and their vision, since it was their conversation that brought function to life in the first place, and their commitment which enabled it to become what it is now.