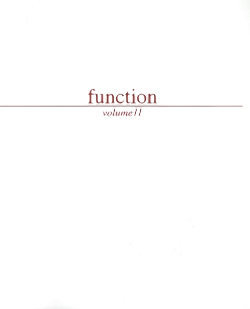 
With this issue, Function begins its second decade. It now seems hard to imagine a time before the publication existed, but that time was not so very long ago.

In 1969-70, Ryerson’s original Photographic Arts Department underwent significant expansion and moved into new facilities at 122 Bond Street. As new programs took shape in this new environment, students and faculty agreed that the work they were producing should be shared with a wider audience, and they tried to find the means to make that possible. Ryerson: A Community of Photographers was one result of this effort, and it was the School’s first publication, printed to accompany a show of Ryerson photographs at the Royal Ontario Museum in 1974. The late Donald Dickinson wrote the introduction, and photographer Phil Bergerson was one of the exhibiting participants.

Five years later, another book was completed: Canadian Perspectives, a 446-page catalogue of lecture and discussion transcripts from a national conference on photography which was hosted at Ryerson during March of 1979. Phil Bergerson, who by this time was a full-time faculty member and who also established what was to become the Kodak Lecture Series, was the conference organizer. The conference itself examined many of the themes that have become so important in contemporary media education: the role of photography in the visual arts and in society, changing exhibition and collection practices, the expanding field of photographic history, and new directions in lens-based media and imaging systems.

During the 1980s, the School built on these earlier initiatives and mounted occasional exhibitions in different parts of the city. Shows were installed at Exhibition Place in the CNE, the Market Gallery in the St. Lawrence Market, and what was then the Canadian Centre for Photography (later to become David Mirvish Books on Art) on Markham Street. Maximum Exposure, which became an annual event, was established at the end of the decade, and it began a new tradition of public exhibits in all media, showcasing student work and celebrating the conclusion of each academic year.

Throughout the 1990s and into the new century, Image Arts continued to increase its interest in public display and community involvement. Maximum Exposure grew in scope and eventually moved to an off-campus venue; the Ryerson Gallery at 80 Spadina was founded, giving the School a permanent exhibition space in the downtown arts district; R.U.F.F., the Ryerson University Film Festival, took on its own identity, and Meta, the annual New Media Festival, completed the spectrum of exhibition activities.

Everyone realized that the School needed a publication program to support its exhibition activities, one which would also serve as a forum for creative ideas and critical debate. Given the effort that was going into making and presenting their work—and this work’s remarkable range and quality—students rightly deserved to have their efforts preserved. By 1998, new digital technologies were accessible enough at the consumer level that even a small organization could design a publication on-screen and print only as many copies as were needed, eliminating the large and expensive print runs that were so essential to older processes. It seemed worth a try, and that winter an intrepid crew of individuals led by Chad Gerth, Barrett Brownlee and Allan Lee produced Images and Ideas, which in turn paved the way for Function.

Function itself was created by this same team, assisted by Aileen McMillan of the School of Graphic Communications Management, and until 2001 it was published jointly by Image Arts and GCM. Function had an online presence right from the start, and it also began a tradition of including interviews with guest speakers, curators and media artists who visited the campus as Kodak lecturers. The first issue explored the possibilities of imagery in print form, the second was devoted to the process of making and the third reflected themes of the body. Function quickly became an integral feature of life and activities in the School. A look through the contributor lists from these early years reveals an amazing list of Image Arts students who now have successful careers in all media, as well as in education, curation, web design and filmmaking. These three issues also include an equally remarkable list of individuals who visited, wrote, spoke or showed work at the School: among these were filmmakers Stan Brakhage and R. Bruce Elder, photographers John Gossage and Abelardo Morell, media artist Carolee Schneeman and theorists Arthur and Marilouise Kroker.

Despite all this, Function number four nearly didn’t happen. The burden of fundraising while simultaneously editing and producing an annual publication eventually wore people down, and there was a one-year gap in the magazine’s production. It was re-started in 2003, as a new issue titled Primary Function. The tradition of showcasing student work and highlighting visiting artists continued: Jennifer Baichwal, Jonas Mekas and Robert and Shana Parkeharrison visited Image Arts to share their work and ideas that year, and all were given space in the magazine.

For the fifth issue, Function took a new direction and was given a new subtitle, Guide to Visual Culture. The editorial team concentrated on raising funds internally and was assisted by the School of Image Arts and by grants from P-FACS and RYESAC, all of whose generosity should be noted here. The magazine’s format was changed to include foldout spreads, and its content was expanded by providing a CD-ROM of film and new media work bound into the back of each issue. Interviews were published with David Cronenberg (conducted by Bruce McDonald), Larry Sultan and Andres Serrano; and a studio visit with Max Dean was featured on the CD.

Issue five represented a turning point. Since that time, the magazine’s finances have stabilized, the format has continued to include work on CD and more recently on DVD, students whose work has been published have in many cases gone on to graduate schools (in Canada, the U.S., France, the U.K. and elsewhere) and they have continued to make their mark in a variety of media. And interesting artists have continued visiting the campus and sharing their ideas with the Image Arts community. Between 2005 and 2007, Floria Sigismondi, Jamel Shabazz, David Rokeby, Doug and Mike Starn, Terry Gilliam and Duane Michals all spoke on campus, and gave interviews that were printed in Function issues six, seven and eight.

Many of these issues are now collectors’ items. The format was working, the tradition was firmly established, Function could be purchased in selected bookstores and viewed on the web, digital media were increasingly represented and the print run grew larger. Nonetheless, the editors kept going: Function nine expanded in size and experimented with a new logo, and its interviewees included Larry Towell, Eduardo Kac, Jason Reitman and the Guerilla Girls. Issue nine also presented work from the School’s new MFA program in Documentary Media, another first for the School and for the publication. Function ten was scaled up to a full 9×11½ size, with the DVD now moved to the front, and it published material from discussions with Stephen Bulger, Chad Gerth, Bill Nichols, Cindy Poremba, Don Weber, Rafael Goldchain, Josh Raskin and Carly Benkendorf. The page count also grew: to 118, a new total.

All of this brings us to Function number eleven and to this present year. In many ways the School has come full circle: having been out of the Image Arts building for two terms (and having lived through a year of renovations before that), faculty and students are about to re-enter an expanded facility at 122 Bond Street and once again begin a new era in a new working environment. As in 1970, these new facilities will make possible new programs and activities, including the Ryerson Image Centre, which in turn will create a new profile for the School and the university. The Image Centre is the first building to be completed as part of Ryerson’s new Master Plan, and it gives Image Arts a new prominence on an expanding campus. The building will house existing programs as well as newer ones (the Photographic Preservation and Collections Management MA and Documentary Media MFA programs are already running; Film Preservation and Collections Management is planned to begin in 2012, and an MFA in Dramatic Writing is under development, as is a new initiative in Experiential Media). The building’s translucent glass panels will illuminate the campus, and a new media wall by the Gallery entrance will stream images throughout the year, visible as you turn off Yonge Street and walk along Gould. A new café, new landscaping, rows of trees and a pedestrian walkway will create a completely new setting for the building itself.

Function has played a key role in the development of the School, particularly in recent years. When Ryerson was first contacted about possibly housing the Black Star Collection, Image Arts made sure its visitors went home with copies of the magazine in hand. And as other arts organizations take note of what Image Arts is doing and discuss the possibilities of shared programming (among them the Contact photography festival, and TIFF), Function has helped enormously to define the School and showcase its activities.

Image Arts students and faculty approach their new situation with this publication program solidly in place, and a decade of experience creating a magazine which has continually grown in scope and twice reinvented itself. And as Function has evolved, it can better reflect the process of change: in the media that we use, and in the media practices that surround us.

Carl Jung gave his last text an evocative title—Memories, Dreams, Reflections—and somehow the work in this issue of Function brings this title to mind: nearly every image embodies characteristics of one or another of these words. And in another yet very real sense, the entire issue manifests Jung’s entire title: in a world overburdened by rhetoric, mind games and strategies of deconstruction, it is a pleasure to see work rendered and presented whole, with its unity of expression intact, its aesthetic sense untrammeled, and its idealism apparent rather than hidden away.

Congratulations to everyone whose work is published here this year. And a warm thank you to everyone who submitted, everyone who contributed, everyone who wrote, designed, fundraised, supported, sponsored, advised or assisted. Thank you also to all Function’s helpers and guides, not just for this year and this issue, but for all the issues and years that have gone before.

The Function website can now be accessed at www.functionmagazine.ca