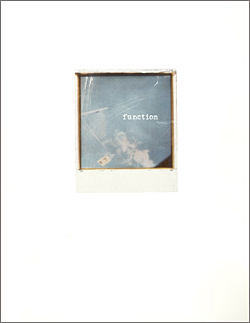 From the earliest planning meetings, this issue of function was about process – the mysterious sequence of events which begins, in each of us, with an inner stirring of neural activity. This activity leads to thought, which in turn can drive us to action: sometimes this action involves marking on prepared or sensitized surfaces, where we leave the traces that we call words or images.

A set of events has become something visible. This process – through which images are made, or articles written – is beautifully articulated in this issue, and many ideas about process itself are included here as a cross-reference, or as a verbal counterpoint to the work reproduced.

There is another process that images undergo once they are made: a process by which they acquire or lose meaning in a larger context, or a process by which certain picture-making activities become culturally validated, while others drop away. Why is this? If we live in a civilization of images, don’t we need as many forms of image-making as possible?

We have more images, but trust them less; so we select certain images and ascribe great value to them. These images – now articles of value – become, in some way, articles of faith. We believe in some images simply because they have become enormously expensive: knowing that a photograph is worth a lot of money makes us look at it differently.

More images clamor for our attention, so we perceive many images in a state of perceptual compression, minimally identifying them as quickly as possible and then moving on. Knowing this, image-makers and editors often resort to extremes to pull in our gaze and our consciousness: some images are famous because they are shocking, or because they are used as instruments of shock on the printed page. This works in the west, but how effective is it in other circumstances, particularly where life itself is at an extreme?

Some images speak to us in a curiously encrypted visual language: we have to work on them for a while in order to “get” what they mean, and this work and the resultant sense of self-validation are enjoyable. It’s fun to figure out an image the same way you work on a crossword puzzle, and presumably it’s fun for the image-maker to create the game in the first place. In any event, much imagery is now constructed this way, in both lens-based and digital realms.

How, then, does one create real value? What process do you go through? What path do you follow? If inflated valuation, use of visual shock, or systems of codification are prevalent but ultimately hollow, how is new meaning created? The answer, I think, will always come from within the individual rather than from larger social norms. Observing honestly and writing and picturing directly from one’s own experience – as the image-makers on these pages do – will, ultimately, lead one back to oneself. This occurs not in the sense of reinforcing ego, but in the sense of self-understanding. And, over time, this process also leads outward, as we discover that the personal and the universal are not so different after all, and that the most personal images often have the greatest meaning for others as well.