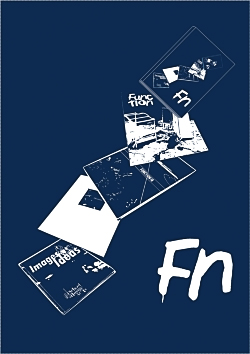 
As the revered Image Arts professor’s storied history here at Ryerson draws to a close, we take one last opportunity to sit down with the man behind it all. Discussing all things Function, we talk about the influences that led to the publication’s origins, the ways in which its evolved over the years, and finally where it’s headed in today’s photographic climate.

FN// Going back to the beginning, what were the initial motivations that sparked the idea for Function? What was its main purpose? What was it setting out to achieve or address?

DS // It happened organically. The idea came to us in the 1997/98 academic year; I had been at Ryerson at that point for twenty years. Ryerson became a university in 1993—Ryerson’s fiftieth anniversary was in 1998, and the curriculum was changing from an applied, career-oriented studio-based photo program to a personal, artistically driven and much more open program. If you looked at the curriculum, you could see what was happening. The core courses were still very traditional. There was studio, critique, lab, and photographic technology. Very limited, very straightforward: year one, year two, year three, year four. However, students were interested in going way beyond that. The real action in the curriculum at that point was in the electives students were able to take, where they were learning things like sound design, advanced studio lighting, media business studies, advanced new media topics, modern movements in the arts, topics and issues in contemporary photography – and so on.

These are the things that students were really interested in, and the field was just exploding. The traditional curriculum that we had these neat little boxes for could no longer fit what the students wanted to do. It just didn’t work. They wanted to work on their own ideas; they wanted to take elective courses where their creative pathway could be tied into what was going on, not in professional photography but in photography as an art form.

So, in 1998 I was teaching Movements and Issues in Contemporary Photography. There were several people in the class who were interested in graphic design and in digital publishing. At the time, there were only three firms in the city that would digitally output something for you in an edition of whatever you told them to do. One of our students, Chad Gerth, was really interested in exploring what we could do with this. We had a discussion in class and decided, “All right, let’s just publish something. We’re at Ryerson, we’re exploring images, we’re exploring ideas, we’re in the School of Image Arts, what can we do?”

This is what eventually became Function Magazine [hands over a copy of Images and Ideas], and Chad was the student who drove it. So we worked like crazy for the term and put together this idea that it would be student driven, that it would be a communal activity, and everybody would participate. It would be digitally printed, and everyone would get a copy. Afterwards we thought, “Okay, this is great, we did it.” I showed it around, and somehow it created this real sort of ripple effect. Everybody said, “Wow! We didn’t know we could do this, let’s keep it up, let’s turn it into an annual publication.”

FN// What’s particularly fascinating about Images and Ideas is that, out of necessity, it became the blueprint which spawned everything that has led to what Function is today, and has even foreshadowed many of the things that are currently developing within Function, as well as Image Arts. They were thinking about the same ways we try to see the world today, but instead this was twenty years ago, at a time still heavily rooted in analog. It’s quite interesting to notice these similar ideals traced and represented through history via the tools available––then watching the evolution of that over time.

DS// Exactly. Then along the way we tried some experiments. The first issue of Function was an open call. Then for the next year, we thought we should do a theme-based issue, and so for Function number 2 the students made an issue on process. There was also a little bit more in this issue, you can see that it was all experimental work. In addition, we had begun to invite people who had spoken at school during the year to contribute essays. That’s where the idea of visiting artists making contributions worked out well. Function number 3 was about the body, specifically representation of the body. How does that work? What’s that all about? Here you can see people pushing the envelope and exploring the interface between the photograph and the moving image, between the analogue and the digital, and again, more essays.

FN// What was your experience like witnessing a new group of students each year coming in to take on Function, bringing their own talents and visions to the publication?

DS// Oh, it was amazing. It always kept me thinking: “What is this telling me as a teacher that I need to go out and learn and bring to my classes, and how can I help make this work?” I was explicitly an adviser for Function for the first four or five years, and I was sort of in the background for the following four or five years—but I was IMA Chair at the time, so I couldn’t take it on. After Function reached the ten-year mark, I began to think that this is really a happening thing, it’s got its own momentum and other faculty members were starting to take on the advising and the mentoring. I would just be there to answer questions, but I wasn’t too involved with it by that point. It was only just in the last couple of years, Alex Alter and I were thinking it needed to get back to a more visually oriented publication from the dense, academically based version of late. So I got involved with it again, but I’ve never said, “It needs to be this.” I’ve always said, “What does everybody want to do? Okay, if that’s what you want to do, I can see these ways to do it.”

FN// Looking back on your time here at Image Arts, you’ve made such great connections with faculty and students alike, some of whom have then gone on to become teachers at this very school as well. You’ve garnered a respect that is undoubtedly well deserved and have built a legacy here that is sure to last. What aspects in particular you will miss most about those daily connections with everyone after being here for such a long time?

DS// Well, the thing about being in a school where people are doing creative things is that it’s the only thing I ever wanted to do in my life—and there’s just something amazing to me about that. Some people love trading stocks, other people love writing literature, other people just love playing baseball. I just really love the visual arts and being around that, so I don’t see myself ever not being around organizations where there’s artistic activity.

FN// Given all the experience you’ve had over such a long career, everything you’ve seen in Function’s history and where it’s going today, do you have any tips or advice for what to look for in terms of trying to continue that legacy of trying to create a space and community for the students? For creating and maintaining an environment where people can come together and think, make, and talk about art? Especially with regards to the new ways technology has allowed art to be seen and showcased?

DS// You guys know more about web-based imaging and strategies of distributing your images on the web than I ever will, so number one is: Use your skills to get the work out there, and use every available channel to create linkages and connections. The second thing would be: don’t fall into the Instagram syndrome, take yourself seriously as you build work, but also build an archive. Keep the idea of the centre evolving, and the themes that preoccupy students. Keep that visible and accessible so that year after year it’s an easy click to find the previous issue or last year’s posting. Think for the long term, think: “I’m doing this now and I want it to stay up there.” Take yourself seriously, post your stuff for the long haul, don’t get boxed in by just one way of seeing the world.