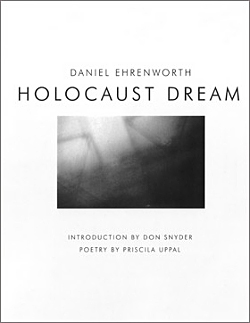 Right from the opening frame, the scene is desolate. As the camera pulls down, posts and barbed wire appear in the foreground. The narrator’s voice, extremely precise, has a tone of unspeakable sadness, but the urgency of the message precludes any indulgence:

A peaceful landscape… an ordinary field with crows flying over it…

Description must remain paramount, emotion secondary: the frame shifts to the right, and we see the fences, the road, the watchtowers and finally the buildings. The film is already relentless:

The blood has dried, the tongues are silent … only the camera goes the round of the blocks … weeds have grown where the prisoners used to walk. The wires are no longer live … no footstep is heard but our own….

This is the landscape of Night and Fog, the same landscape that Daniel Ehrenworth visited and photographed at the end of 2001 and again in 2002. The setting of Resnais’ famed documentary has changed little, at least in its outward aspects: four and a half decades later, Ehrenworth’s images show the plains and fields of Auschwitz under the selfsame skies. The barbed wire remains, and so do the fences, towers, roadways and paths. The camp buildings, a few scattered objects, traces and remnants of human lives, all are still there. The crows continue their flight in the still-heavy atmosphere; even the sunlight feels burdened with sorrow. The black and white of the prints – there is little gray – and the blur of slow shutter and large aperture combine to make this sense of burden more visible, less unreal. One can readily imagine Ehrenworth’s emotional state as he made the photographs. Yet, like Resnais’ narrator, he does not indulge his feelings. Again, the message is too urgent.

The pictures, writes Ehrenworth, “tell the story of a dreamer returning to the site of a personal apocalypse, and seeking the starting point of a new human narrative.” Each image seems to arise from one dream state and evoke another: a vision is presented of something half-remembered, yet physically present and palpably ominous. The photographs as a set are unbalanced in framing, and unbalancing to the viewer – dark, brooding and filmic, they are at once visionary and full of horror. The personal apocalypse has receded in focus, but not in actuality; the sequencing makes this clear. How then is it possible to find the starting point of a new human narrative?

One answer may reveal itself through the images themselves, which eventually disclose an element of acceptance, or hint at a transcendence of grief. A viewer who pursues this meaning, willing to stay with the work over a period of time – far longer than anyone ‘normally’ looks at photographs – may perceive these strains, however faint. Although they may well remain beyond words, imbedded in the grain of each picture, they will somehow be noted as present, and responded to accordingly. Ehrenworth’s work, regardless of subject, is never without empathy; accordingly, it is never without hope. His recent projects are all in this vein: he wants to investigate, to scrutinize and comment, even to disconcert his subject or audience; but cynicism or nihilism are not part of either his intention or his expressive vocabulary.

Another answer, or a possible set of answers to the complex question of a ‘new human narrative’ can be found in the vast literature of interpretation and criticism, as people consider what artists should do, or what images are for. Albert Camus begins his influential essay The Artist and His Time with a rhetorical question, directed at himself:

As an artist, have you chosen the role of witness?

At first, he answers the question in this way:

I don’t ask for any role and I have but one real vocation. … Artists of the past could at least keep silent in the face of tyranny. The tyrannies of today are improved; they no longer admit of silence or neutrality.

Considered as artists, we perhaps have no need to interfere in the affairs of the world. But considered as [human beings], yes…. I cannot keep from being drawn toward those, whoever they may be, who are humiliated and debased. They need to hope, and if all keep silent … they will be forever deprived of hope and we with them. It seems to me impossible to endure that idea….

This undertaking, I know, cannot be accomplished without dangers and bitterness. We must accept the dangers … But we must reject the bitterness … [The artist’s] very vocation, in the face of oppression, is to open the prisons and give a voice to…all. This is where art, against its enemies, justifies itself … Any authentic creation is a gift to the future.[1]

Camus was talking about writing when he proposed how artists should act and what they should do, but much of what he claims for language applies to other forms of expression, and particularly to visual arts. In this sense he also deals with images, and what images are for.

In the case of Ehrenworth’s work, and specifically his use of photography, passages in Susan Sontag’s recent book concisely appraise the value and even the usefulness of photographic images in relation to larger questions of representation:

Nonstop imagery (television, streaming video, movies) is our surround, but when it comes to remembering, the photograph has the deeper bite. Memory freeze-frames; its basic unit is the single image.

Even in the era of cybermodels, what the mind feels like is still, as the ancients imagined it, an inner space—like a theatre—in which we picture, and it is these pictures that allow us to remember. [2]

While Sontag’s relationship to photography is complex – and the complexities are fully developed in Regarding the Pain of Others – her statements about photography and memory are presented as a recurring motif in the book, and they certainly help with any serious interpretation of what people think of as ‘difficult’ material. In this sense, they provide another fitting commentary on what Ehrenworth has done; later in her book, Sontag comments, simply, that

“Narratives can make us understand. Photographs do something else: they haunt us.”

Seen in this context, Ehrenworth’s statement about the meaning and the message of this work become fully supported by the images and sequencing in the installation. This is a dream, but also a memory; a set of images, but also a statement; and a work of personal expression, but also commitment, driven by the same ideals that have motivated so many others. The images should haunt us; this is the whole point …these are the ideals which Camus sees as so essential to civilization and culture, “without [which]… society, even when perfect, is but a jungle.”

As we turn the pictures over in our mind, a new narrative does form, one that leads back to the camera which again pans slowly across the landscape at the conclusion of Night and Fog. The narrator’s tone has not changed, but the tense has; we are now in the present, about to enter an uncertain future:

As I speak to you now, the icy water of the ponds and ruins lies in the hollows of the charnel house, a water as sluggish as our own bad memories. War nods, but has one eye open …the skill of the Nazis is child’s play today …who is on the lookout from this strange watch-tower to warn us of our new executioners’ arrival? Do they look different from us?