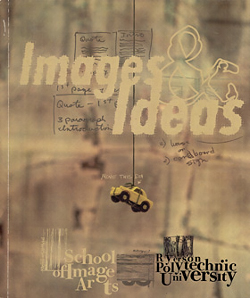 This volume represents the visual work, writings and sketches – the images and ideas – contributed by participants in the winter 1998 upper-level elective NPF548: Modern Movements/Issues in Photography. The book, like the course, grew out of a series of questions about the nature of contemporary photography and out of a desire to find meaning and context for personal work in an era of change and contradiction.

Photography in the late 20th century resists both simplification and generality. The medium has not evolved according to what was predicted for it; traditional histories are now seen as limiting rather than inclusive; few contemporary theories truly address a wide range of photographic practices, and most are arbitrarily selective, narrowly focused, or self-justifying. The original magic of photographic realism has given way to the “realistic” magic of the constructed, rather than the observed, image. In turn, photographs are now read as texts to be deconstructed rather than expressive images born out of poetic drives and appreciation for the interface between the visible and the metaphorical, or between the personal and the universal.

As we looked into these issues, it seemed appropriate to create something out of this investigation of contemporary theories, rather than simply produce a series of essays. During the last half of the term, a book gradually took shape, first from class discussions about possibilities and approaches, then from exploration of practical realities: format, costing, edition size, funding. As work came in, an overall design emerged, and the structure of the book reflects this: work is grouped loosely in sections, with sketches, idea fragments and writings forming a structural motif that reflects the development of ideas from an initial to a more finished state.

An extraordinary amount of effort went into making this project a reality. Thanks are due to all who contributed material for reproduction, to the sponsors and donors without whose help the project would have been impossible, and to the design and production team, especially Chad Gerth, Barrett Brownlee, Phil Brideaux, Michelle Bjork, Maria Raponi, felicia miedema and Thanin Chan. Finally, thanks are due to the School of Image Arts, for its assistance with this new venture, published to coincide with the School’s 50th Anniversary.