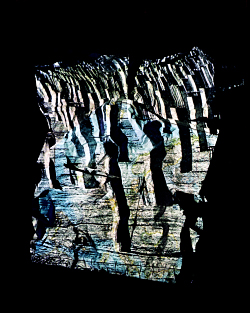 2006 – Imagining Places: The Destruction of Space

The photographs installed in this exhibition represent specific places: Abu Ghurayb, Mecca; Hurgada in Egypt, Karbala in Iraq, the Three Gorges Dam in China; nuclear installations in North Korea, Russia, Iran; the Pentagon, Ground Zero. The names of each location evoke differing reactions, but the photographs are completely straightforward: satellite and surveillance images are downloaded, and projected onto crumpled maps of southern Europe, the Mediterranean basin, the southeastern United States and North Africa. The projected image is the light source for each photograph. All exposures are made on 8×10 color negative film and enlarged directly. The images are literal, photographic and completely accurate: nothing is added, and both negative and print are recorded in single exposures.

The sites portrayed are thought of, however, as sacred or profaned, dangerous or damaged, ecologically threatening, politically contentious, troublesome or troubled, distant or strange. The image colors are vivid, the shadows opaque; each map floats in a rectangle of darkness, and the projections appear simultaneously brilliant and faded, fully present in the moment and yet also from another time or another place altogether.

Wieslaw Michalak started photographing early in life, fascinated by photography, and feeling completely at home in the darkroom. Original influences included Man Ray and Moholy-Nagy, whose work particularly fascinated him with its strange angles, new vantage points, and the idea that these images were not about documentation but about composition and seeing. Old family photographs were precious possessions; a few back issues of National Geographic, some with maps, were treasured representations of a different, inaccessible world.

Michalak also grew up in a region of Poland that had originally been German and was annexed into Poland following World War II, quite literally an outsider from birth. His home city, Lodz, had lost 40% of its population (it was the second largest ghetto in Europe) during that war; later, it was re-populated, but by what Michalak described as an alien population: “There is a strange presence and absence in that city to this day.” When martial law was declared in Poland, Michalak was in Paris, and he described his situation succinctly: “I had to choose.”

He became a stateless person in 1981, emigrating to Canada the following year, then moving to Australia, England, and back to Canada, more permanently in 1994. While he originally thought he would never have a chance to return to Poland, he has since been re-naturalized as a Polish citizen, but the absence of Polish letters in the new state alphabet has forced a new identity on him, with his former name carefully annotated under his ‘new’ one. “It always walks behind me,” he says, “this sense that I am really from nowhere… the images that I make are all a reflection of that. What we do is a natural outgrowth of who we are…. When I honestly look inside, these images express my gut feelings.”

In the perfect symmetry of his poems, Charles Beaudelaire—who professed to hate photography but who posed so memorably for this invention of his countrymen—envisioned a new world, one in which memory and feeling are quite literally projected onto the crisp outlines of specific places. His best poems, particularly the Parisian Scenes and works such as Voyaging (dedicated to a photographer, Maxime du Camp), mapped and captured that world with an almost photographic sense:

The wide-eyed child in love with maps and plans

Finds the world equal to his appetite.

How grand the universe by the light of lamps,

How petty in the memory’s clear sight…

The glorious cities across the violet sea,

Made our hearts yearn with fierce intensity

To plunge towards those reflections in the sky…

Serve us your poison, sir, to treat us well!

Minds burning, we know what we have to do,

And plunge to depths of Heaven or of Hell,

To fathom the unknown, and find the new!

Places are imagined, boundaries of time and space traversed, in Michalak’s contemporary images just as they are in Baudelaire’s Fleurs du Mal, a cycle which for many marks the poetic beginnings of a new vision of strange, distant, yet absolutely real worlds.