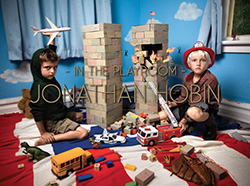 These startling pictures – carefully crafted, instantly recognizable and deeply provocative – actually spring from a long tradition of stories for and about children, re-framing the themes and motifs of these stories for an age of constantly streaming media. Just as the horrors of world events intrude into the playrooms depicted here, in the literature of legends and fairy tales a child’s world is constantly disrupted, challenged or physically threatened from without. Unknown forces align themselves against children’s wits; and children’s innocence, their guide through the severest of challenges, is forever diminished by contact with the adult complexities of good and evil.

The much-loved tales of Hans Christian Anderson, who gave us the Ugly Duckling, the Little Mermaid and the Emperor’s New Clothes, are also populated with witches, wild swans, freezing winds, burning fires, night-ravens, hell-horses and death-lambs; and in a preface to his own vast anthology of stories and fairy tales, the Scots writer Andrew Lang, while admitting that “true stories are not so good as fairy tales,” states bluntly that “many of the tales are concerned with fighting, for that is the most dramatic part of mortal business.” In his color-coded series of Fairy Books and True Story Books can be found scalpings, imprisonments, burnings at the stake, seven-headed serpents, fierce storms and all forms of danger, which children are expected to understand and overcome – and which, most of the time, they do.

Lang gathered his stories from all over the world, and his books can be thought of as an early archive, assembled with a deliberately global reach. The universal nature of these tales and legends has been further explained by Joseph Campbell, whose concluding commentary to The Complete Grimm’s Fairy Tales claims that “myth is a picture-language… the ‘monstrous, irrational and unnatural’ motifs of folk-tale and myth are derived from the reservoirs of dream and vision… If there ever was an art on which the whole community of mankind has worked …it is this of the ageless tale.”

Jonathan Hobin describes his own childhood as a period of fascination with fairy tales, and also a time of intense spiritual struggle. A “typical kid… quiet and very thoughtful,” he speaks of his upbringing as traditional, and infused with religious faith (including rituals such as Sunday School songs and Nativity plays) but also driven by the doubts that arise out of any faith system, especially in the mind of a child. He recalls childhood anxieties and family challenges in vivid language, particularly “the anxiety about coming into your own, about what your place is going to be,” and outlined an education that took him first toward the sciences – in which he excelled – but which eventually led to the arts and to photography, about which he commented: “you can say so much more – you can take a total fantasy, something you would read in a book, and make it real. People can see instantly what you are trying to say; you can bridge the gap between what we imagine, and what we know to be real.”

“Documentary photographs of childhood do not reflect how I remember it,” Hobin continues. “Childhood can be creepy; you can feel lost in the woods, just trying to get back to a safe place. It is the voice of the solitary character that is always speaking to me when I make images, the voice that asks, ‘When will I have some clarity? When will I know where I am?’… I don’t want to forget the little boy who was lost in such a confusing place.”

“These are modern-day fairy tales – news stories have become our fairy tales – and nothing is private now, there are cameras everywhere. Play is how kids process information… By making these pictures, I and they are trying to make sense of what the media show us. My work is staged, but the images reflect elements of real life… and adults have to look at it and relate to it in terms of their own experience. I work with children because you need to see a real child in order to get the message across; painting doesn’t work. Photography is the only way to say it. And these pictures serve a purpose, as a moral, as a warning, just the way nursery rhymes did. There is often at least one child looking back and connecting with the viewer. So you have to ask, ‘What’s wrong with this picture?’”

While these images originate in a storytelling tradition and grow out of the artist’s own background and experience, they can also claim a place in the traditions of photography itself, particularly the traditions of staged image and narrative tableau. At the end of the nineteenth century and into the first decades of the twentieth, British Columbia photographer Hannah Maynard conjured departed spirits through her photographs, particularly the spirits of children; and she pioneered approaches to multiple printing and image montage that have been avidly adapted in the Photoshop era. More recently, as photography moved further from its analog origins and began to reinvent itself as a new form of practice, Bernard Faucon produced his oddly demonic images of a surrogate child-world in the Summer Camp series, and Laurie Simmons began photographing dolls and children in direct challenge to our accepted notions about representation and idealization. Sandy Skoglund has started making full-scale sculptural narratives, often with children or even babies as protagonists, which she then photographs. Flames appear in these images, monsters lurk, and dolls behave strangely; irradiated cats prowl and forage, and oversize goldfish fish swim through the blue night sky. Fears are hidden, dreams disrupted, stereotypes are assailed. And in these photographs as in all fairy tales, the innocence of children, so often threatened, still stands as a bulwark against even greater disaster, or a beacon by which adults themselves may navigate.

The staged imagery of Jeff Wall, the recreated crime documents of Stan Douglas, the disturbingly invaded bodies of Diana Thorneycroft – or the disruptions to the canon in her Group of Seven Awkward Moments or Auditions for Eternal Youth – all, in one way or another, explore realms parallel to those that Hobin pictures here. Current events and adult historical knowledge invade the frame or determine the choreography of participants, children and adult; the viewer is confronted with the discomfort of looking, and, since these are photographs, has no means to turn away from reality.

It is true that Hobin’s pictures have generated tremendous controversy, more than he ever expected, but this controversy is in many ways an index of his effectiveness at touching a shared human nerve. As Susan Sontag wrote in Regarding the Pain of Others,

Even in the era of cybermodels, what the mind feels like is still, as the ancients imagined it, an inner space – like a theatre – in which we picture, and it is these pictures that allow us to remember… This remembering through photographs eclipses other forms of understanding, and remembering…. Narratives can make us understand. Photographs do something else: they haunt us.

These images do haunt us, as stories, as images, as expressions of our own dilemmas. We look at these children, enacting the melodramas and tragedies of our time, and they look back at us watching them. As Hobin so aptly puts it, “the idea that kids are carefree is a false one… it is really children who carry the weight of the world.”