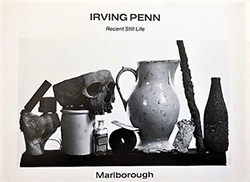 
Any response to the work in the Marlborough Gallery’s catalogue Irving Penn: Recent Still Life will in some measure be conditioned by the viewer’s notions about still life, about photography and particularly about Irving Penn himself. If one believes that still life as a genre is best served by painting, these forty-odd reproductions of Penn’s platinum-palladium prints may seem stiff, limited and imitative at best, no matter how clever. If one feels that photography can or should explore its relation — as art — to works in other forms or media, this series may come across as original, disturbing or inspiring. And either reaction will in turn be affected by whether one thinks of Penn as a commercial photographer doing ‘art’ in his spare time or as an artist doing ‘commercial work’ to earn a living.

If a viewer has the former concept of Penn, it would be easy to see his various publishing and exhibition projects over the last two decades as a necessary release from the stress or confinement of commercial life. Looked at in this way, Penn’s precariously balanced studies of metal pieces, restricted in format to the unconventional proportion of a banquet camera negative and photographed with consistently tight framing, become expressions of latent frustration or even of a cleverly disguised rage. Similarly, the still lifes of bones, skulls, withered fruit and a smashed plate can be seen as slightly bitter musings about mortality and the decay of the flesh as Penn approaches his mid-sixties. The logical result of this kind of looking would be to place these still lifes in a relation to Penn’s commercial photographs (especially the ‘Clinique’ advertisements) similar to the position Nothing Personal and Avedon: Portraits might occupy relative to Avedon’s fashion photography for Vogue.

If, however, one thinks of Penn primarily as an artist (he graduated from the Philadelphia Museum School of Industrial Art; his early work included drawing, design and painting) who is incidentally a commercial photographer, Irving Penn: Recent Still Life can be appreciated in quite a different way. Penn’s inventiveness with crude objects, an essentially flat picture plane, featureless backgrounds and little variation in lighting, coupled with the successful use of an awkward rectangular proportion (roughly 11½ by 19½ inches) and a technically demanding material (platinum printing is no less difficult now than it was in the last century) can make the collective work a virtuoso piece — one that few photographers would attempt and almost none could bring off with any real success. (For example, John Gruen’s book, Objects, while apparently similar to Recent Still Life, utilizes many more varieties of subject matter, and is far less intellectually rigorous.)

Probably the best interpretation of this work combines awareness of its thematic implications with respect for its visual skill and boldness. The finest images in the catalogue, such as “Steel Pieces with Dust”, “Blast”, “Bird Bones (Sweden)”, “Three Steel Blocks” and “Eighteen Pieces with Medicine Bottle” are taut and arresting, compelling long viewing and considerable reflection and thought. How many exhibition catalogues from the current year show work of equal assurance and provocativeness?