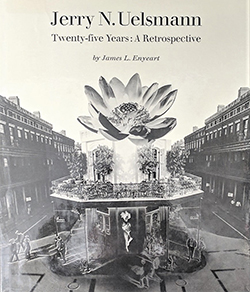 Jerry N. Uelsmann / Twenty-five Years: A Retrospective, by James L. Enyeart (a New York Graphic Society book recently published by Little, Brown and Company) is an attractive yet somewhat curious volume. Beautifully produced, with attention to detail throughout, it includes reproductions of 140 Uelsmann photographs dating from 1956 to 1981, with another 34 images accompanying the author’s sixty-odd page introduction. In one sense, then, it serves as a valuable anthology of work by a major photographer. In another sense, however, the book seems awkwardly timed and inconclusive: Uelsmann is forty-nine years old, one assumes his career has a significant future and one wonders if it isn’t a bit early for a retrospective — especially one that attempts such a definitive essay on the photographer and his work.

This essay provides the usual chronological and critical data as well as making the almost inevitable three-part division (early, middle and late) of the work under discussion. It does provide an interesting sample of Uelsmann’s early photographic efforts, but these images are eclectic to the point where Uelsmann himself admits that “A little bit of the spirit of all of the silver heroes of the fifties is there. The range is so great . . . that you could prove anything . . . if you want to show how a little of Minor caught my heart, or a little Callahan caught my eye, or Sommer caught my mind. It’s all there.” With the photographer so frankly admitting “you could prove anything” about the work from his formative years, Enyeart’s attempts to use this work to lay a critical foundation for discussion of Uelsmann’s more mature photographs come across as laboured and unconvincing.

Once the author starts dealing with Uelsmann’s multiple-imagery from 1963 and beyond, the introductory essay becomes more valuable. Enyeart deals to some extent with the symbolism, recurring motifs and visual patterns that are important hallmarks of the Uelsmann style and manages to use Uelsmann’s own observations and writings in a much more appropriate fashion. The choice of 1967-1975 and 1976-1981 as the equivalent of “middle” and “late” periods in Uelsmann’s working-life-to-date is curious, however. About the 1967-1975 years, Enyeart writes: “During these eight years Uelsmann received his greatest exposure through exhibition, publication, and honors. His style was now distinct and recognizable. His execution and craftsmanship in photomontage were flawless, and critics began to talk about his work on the basis of his aesthetics, no longer dwelling on his technique.” Twenty-five pages later, Enyeart begins the chapter on the 1976-1981 period by observing: “Since 1975 Uelsmann’s photography has been increasingly exhibited and published internationally…. A comparison of these [recent] works with those of a decade ago reveals a preponderance of similar motifs and poetic interrelationships. . . . Reviews of Uelsmann’s photography since 1975 . . . clearly accept without question Uelsmann’s stature as an artist of major influence.” This is a rather lame set of distinctions — Enyeart would have been better off not trying to create divisions where they do not naturally exist and concentrating instead on a more thorough, overall critical analysis.

The selection of photographs is generally well balanced. There is a good mixture of work from the earlier books (Jerry N. Uelsmann, 1970 and Silver Meditations, 1976) along with less familiar and almost unknown images. This mixture helps one trace the evolution of the main Uelsmann themes, symbols and formal structures in a more complete way than either previous volume. The final section of reproductions is particularly effective and here Enyeart talks about the work with considerable cogency:

Uelsmann has used … subjective definitions to categorize these broad areas of visual concern, such as the predicament of Man, nature-energy embedded figures, dream moments, and portraits.

This isn’t bad, although it could go further in one important respect. Virtually all of Uelsmann’s work since 1963 reads from bottom to top, foreground to background and is clearly organized around vertical and horizontal axes that divide the image in halves or thirds. Interior and exterior worlds frequently allude to dreams and reality (in that order); the forces that shape existence behave according to specific laws and in many cases the photographs deal with the earth’s surface as a symbolic interface between existences. Things below the earth often exist in latent or potential-energy phases; living things on the earth seem inexorably bound to a cycle of growth and decay; forms or objects which float above the earth seem beyond this temporality of being and beyond the grasp of time and gravity. Although the photographs do not exclude possibility, fantasy and even some kinds of freedom — objects can metamorphose; situations and conditions often change — Ueslmann’s world view seems firmly rooted in a system of thought and method of vision that depends on clearly visible themes and principles of organization. It is surprising that Enyeart shows an awareness of these issues in his writing but probes them so little given his thoroughness in dealing with other, less central aspects of this work.

Critical issues aside, one either likes Uelsmann’s photography or one doesn’t. This book will make few converts of those in the latter category, but for people who do respond to Uelsmann’s vision it provides a strong collection of images whether or not one agrees with the retrospective idea and the time-period divisions which form its basis. One could wish for more new imagery and less critical structure, but at the same time cannot help admiring both Uelsmann’s still-remarkable dexterity and the elegant production that has long been associated with New York Graphic Society releases.