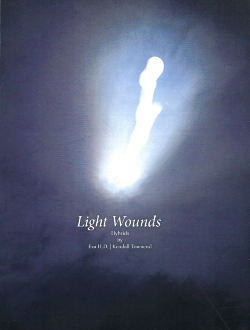 “The lay public,” Henry Holmes Smith wrote, “is utterly blinded by identification. If they can identify a subject, they are satisfied that the photograph has communicated all its secrets.”

From Jonathan Green, American Photography Since 1945: A Critical History

Photographs are always of something―a lens-made image has to depict some aspect of the external world―but they are equally about something, and what they are about is much more complicated. The tension between subject and meaning is, really, what drives the entire medium. It’s not a new issue, but it is a central one, and LIGHT WOUNDS, with photographs by Kendall Townend and haiku by the poet Eva H.D., brings it to the fore in a new and compelling way.

The book describes itself as a set of hybrids, and its 164 pages display 98 of Townend’s photographs together with 83 haiku by Eva H.D. Its sequencing is impeccable, but it can be read in a variety of ways―front to back, back to front, from the middle outward, or entirely at random. What holds the viewer’s attention is not a specific narrative, or even a single way of seeing, but the wonder that arises when meanings are suggested rather than defined.

These meanings may be rooted in experience―often related to memory, identity or relationship―or they may derive from aspects of the image itself: color value, saturation, emotional valence; translucence, reflection, depth of field; even the sense of an instant, or a particular time of day. The variability between what the photographs show and what the haiku proclaim is fascinating: sometimes the poems echo the images, sometimes they contradict what we think we see; other times they bring new thoughts altogether. Each combination is a surprise.

In many of Townend’s photographs, the subject emerges from a background of blue or green, and in large part the images are made vibrant by his sensitivity to color: blue is contrasted with red, green with yellow, purple with ocher or black; lighter tonalities are associated with weather and atmosphere, darker colors with mass and form. The feeling of being in a place or sharing a moment is always present; and while the photographs come from many regions of the world, it is only on occasion that the specifics of a location can be guessed. All the images seem suffused with experience of the natural or the human landscape, and all express a deep love of photography itself. Sometimes mysterious, Townend’s images are nonetheless always approachable.

Eva H.D.’s words both illuminate and challenge these images, and although her world view can be darker than Townend’s, her openness to possibility is remarkable. Opposite a warm-toned photograph of a couple, she declares, I’M NO ICARUS―I never said I / understood marriage, though I’m / no Hegel, either―and suddenly we see the photograph, and the individuals in it, in a completely new way. A close-cropped image of an older man, eyes closed, calls forth a more complex title―I AM, IN A SENSE, IN THE BLINK OF AN EYE MY FATHER―and then this wonderful poem: Hope now flies, he says, / like a wingless bird: still, it’s / a bird, and it tries. Age is visible in the photograph, and parenthood implicit; the image is both expressive and kind. But a wingless bird nonetheless trying to fly is something we would never have imagined: this is a meaning brought to the image, and to the viewer, specifically through words.

In a third example, a haiku titled VINCENT’S BRUSHSTROKES seems perfectly congruent with the more abstract qualities of Townend’s photograph: Who would have thought he / would run out of time before / running out of paint?

LIGHT WOUNDS is Townend’s third book project and his second publication after The Ravine, a hand-printed and custom-bound collection of landscape images now in the Rare Book Collection at the Toronto Reference Library. A complex and time-intensive undertaking, it also develops themes he explored in recent exhibitions at the Propeller and Eastern Front galleries in Toronto, and reflects the experiences of a 35-year career in photography, design, and audio-visual media.

The Canadian poet Eva H.D. is the winner of the 2015 Montreal International Poetry Prize, and the author of Rotten Perfect Mouth (2015), Shiner (2016) and Bonedog, recently featured in the Charlie Kaufman film I’m Thinking of Ending Things. LIGHT WOUNDS is her first collaboration with Townend; it is available to order at www.lightwounds.com.

This is a multilayered and rewarding book, and highly recommended―especially for those who share a curiosity about the endless differences between what an image shows, and what it might express.