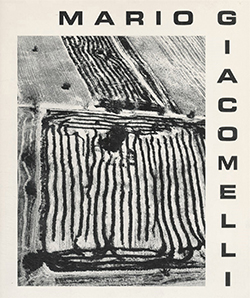 
Readers of this magazine will be familiar with Mario Giacomelli through the images from Verrà la morte e avrà i tuoi occhi (“Death will come and it will have your eyes”) which were published in the Spring 1983 issue. Others may know his work from the occasional exhibition, article or reproduction that has appeared in the past few years, but generally he is known to photographic audiences more by reputation than through wide exposure. Recognition, particularly in North America, has come relatively late; thus the appearance of Mario Giacomelli, released by the Friends of Photography in California as number thirty-two in their continuing series of photographic publications, is most welcome.

This volume has a preface by James Alinder, an informative introduction by Stephen Brigidi and Claire V.C. Peeps, and a chronology; it reproduces forty Giacomelli photographs, drawn from several of his major projects. Included are selections from the Paesaggio (Landscape), La Buona Terra (The Good Earth), Pretini (Little Priests), La Gente del Sud (People of the South) and Verrà la morte … essays, which represent a good cross-section of his total output to date.

The work is usually interesting, often compelling, sometimes annoying, but always absolutely committed. The Paesaggio series, which has occupied Giacomelli’s attention for longer than any of his other projects, is the strongest work here: these passionate, contrasty prints span an incredible range, from crude to subtle and from relatively ‘straight’ to highly manipulated. (In addition to making radical changes in tone value while printing, Giacomelli has taken to doing handwork on his negatives or on the landscape itself, plowing it with a tractor and sometimes photographing from the air). The results take the geometrical forms of Italian hills and farmlands through a remarkable transformation — this is a cubist landscape, rough around the edges, and vastly different from the Italy photographed by Paul Strand or Emmet Gowin.

La Buona Terra and La Gente del Sud are in some respects logical extensions of the Paesaggio work, as they deal with people in relation to the landscape and with lives dedicated to cultivation of the soil, but neither project is as successful. Some images — the famous “Scanno, 1959”, (p. 42), a village scene with an out-of -focus figure staring toward the camera from the edge of the frame (p. 40), and two photographs of farming groups (pp. 33 and 46), one of women and children in the fields, the other of families passing by a haystack in late afternoon — are very powerful. Others are naive, trite or even banal, and this contrast weakens the work rather than contributing dramatic tension. These comments also apply to the reproductions from the Pretini series, which unfortunately come across badly in comparison with the best images from the other groupings.

It is also true that Giacomelli’s work can be raw and primitive. Some may find these qualities objectionable, but the same criticisms can be made of many photographs by Robert Capa, Bill Brandt or Josef Koudelka; and rawness, when it serves an expressive purpose, is far preferable to mannerism or emotional sterility. In this computer age maybe it isn’t so bad to be human, fallible or a less-than-perfect artist. It does not seem that Giacomelli is trying to get away with casual technique or sloppy vision, and whether one responds to his emotionalism or not, his sincerity is never in question. Neither is his love for the earth and his feeling for the people who farm it, and given the ecological destructiveness now occurring on such a large scale, some excess in the service of a statement about landscape can readily be forgiven.

One assumes that in due course Giacomelli’s work will be made more accessible by publication of a major monograph; certainly his career appears headed in that direction. In the meantime, however, this book fills a big gap; and it does so at an entirely reasonable price.