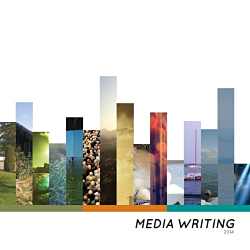 
This catalog showcases the work of students in Media Writing: Critical and Narrative Forms produced during the second year of the course. Fifteen participants from the Documentary Media and Media Production graduate programs contributed to its making.

As in the previous year, there were three assigned problems during the semester: writing of a critical review, developing a personal statement about one’s creative practice, and writing an extended narrative essay. The class opted to group these under the respective headings of Identity (for Personal Statement), Time (for Critical Review), and Place (for Extended Narrative). Passages from Gao Xingjian’s 2000 Nobel Prize acceptance speech, The Case for Literature, framed each section:

What I want to say here is that literature can only be the voice of the individual and this has always been so. …

Literature transcends ideologies, national boundaries and racial consciousness in the same way as the individual’s existence basically transcends this or that -ism….

What is important is to live in the present, to stop being hoodwinked, to cast off delusions, to look clearly at this moment and at the same time to scrutinize the self….

The writer writes what he wants without concern for recompense not only to affirm his self but to challenge society.

Choices of cover image, book design and sequencing of the essays were again made collectively by class members, who worked in teams throughout the term. Design and layout were developed by Siobhan Brannigan, Giulia Ciampini, Karin Culliton and Zile Liepins; editing was done by Michèle Pearson Clarke, Chantal Dignard, Vivian Belik and Anna MacLean. Kathryn Atkinson and Juan Pablo Pinto Mendoza did the digital assembly of the finished book.