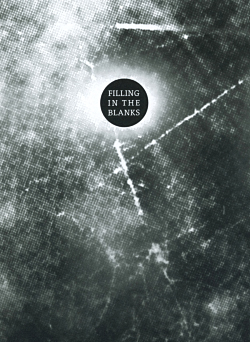 
Filling in the Blanks: Essays on Art, Media and Culture

This catalog showcases the writing of students in Media Writing: Critical and Narrative Forms produced during the third iteration of the course. Eighteen students participated, from the Documentary Media MFA program as well as from other graduate programs in the Faculty of Communication & Design (now known as The Creative School).

As in the previous year, there were three assigned problems during the semester: writing of a critical review, developing a personal statement about one’s creative practice, and writing an extended narrative essay. Due to the exceptional size of the class, the book project changed from that of an anthology of images and writing to a primarily text-based, black & white publication which eventually grew to over 350 pages. Throughout the book, essential questions about the nature of media imagery and the role of documentary practice were continually brought up. The responsibilities of the documentary maker, the essential differences between mediated and lived experience, the distortions inherent in many social media platforms, and the complex relations between intention and image, culture, history, media and memory formed a constant refrain in the writings of class members. As one class participant wrote:

As in Muay Thai, the art of documentary is to express oneself honestly, and follow through with mutual growth and respect—and when in need, to defend oneself, and free oneself from oppression.

Seeking more knowledge should be a mantra, of any fighter, or any documentarian for that matter…. Honestly expressing oneself is at the epicentre of…a craft that requires you to better yourself so you can better the lives of those around you.

Cover and book design, and sequencing of essays were again done by class members. Design and layout were contributed by Elyse Bouvier, Orri Jonsson, Cyrus Sindar Singh and Philip Skoczkowski; editing was done by Angie Ready, Shounak Ganguly and Martin Franchi. Alyssa Bistonath and Stephanie Power did photo editing; additional research was provided by Shivanya Mulekar and Tamar Mankassarian. The quotation above is by Philip Skoczkowski, and Michèle Pearson Clarke served as Executive Editor.