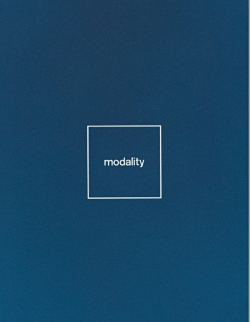 When the School of Image Arts established an off-campus gallery in the downtown Toronto arts district—originally at 80 Spadina Avenue, later at the Gladstone Hotel and now the Artspace at 401 Richmond—annual group exhibitions of student work became an integral part of the Photography Studies curriculum.

Over time, the tradition of a Third Year Show developed. modality, the thirteenth annual exhibition of third year work, continued and expanded this tradition, both through the exhibition itself and via the accompanying catalog.

Claire Harvie and Savannah Onofrey, who provided the Introduction for both catalog and exhibition, outlined the choice of theme as follows:

A modality is a specific way in which information is encoded…. As photographers, images are the modality in which we are able to express our ideas and communicate with the outside world. When dealing with a certain theme, such as The Human Subject, we think about our own experiences and this influences the creation of our photographs.

The viewer is presented with ideas about how human relationships operate in relation to space, time, memory, individuality and object. Some artists…extend the realization of their work through the use of video, projection and/or sculpture. Though photography functions as the cornerstone of these series, each individual has branched out according to their own unique point of view.

As in the previous year, individual responses to the assignment idea are reproduced in alphabetical order in the catalog itself. Themes emerging from these images include Identity, Relationship, Symbolism and Invention, and these are outlined in the accompanying presentation. As before, this presentation was made in order to study and further develop each of these themes, and was used in both production and theory classes once the exhibition itself was installed.

Thanks to Katy McCormick and all third year production faculty