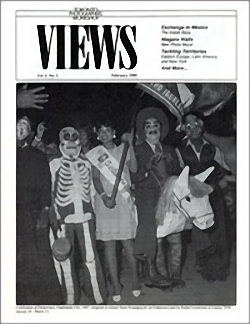 Rafael Goldchain was born in Santiago, Chile, in 1953. He later moved to Israel and studied physics and mathematics at the Hebrew University of Jerusalem in the early 1970s before coming to Canada in 1976. He studied photography at Ryerson Polytechnical Institute in Toronto from 1976 to 1980, and in the years since has established himself as a prolific and active member of the Canadian photographic community. His work has been published in Image Nation, Foto Zoom (Mexico), The Malahat Review and Canadian Fiction Magazine, among other periodicals; and he has exhibited widely in Canada, Mexico and the United States. His work has been included in group shows at the Art Gallery of Ontario, Presentation House Gallery in Vancouver, and the Month of Photography exhibitions in Mérida, Yucatan. Particularly notable are two 1988 exhibitions: Recent Acquisitions at the Museum of Modern Art in New York and a fall exhibition at the Photographic Resource Center in Boston, where Goldchain was one of the winners of the first Leopold Godowsky Jr. Color Photography Awards competition. In 1989, Goldchain has a solo exhibition scheduled at the Art Gallery of Windsor and a limited-edition book is planned by Lumiere Press of Toronto, to be released in conjunction with the Windsor show. Goldchain was active in organizing the Canada/Mexico Exchange exhibition, which brought the work of Mexican photographers to Toronto, Saskatoon and Winnipeg, and showed images by Canadian photographers in Mexico City. Goldchain’s distinctive style has won him recognition from the Canada Council and the Ontario Arts Council, and his work is represented in public and private collections in North America, Mexico and Europe.

Goldchain explained his choice of Nostalgia for an Unknown Land as the title for this exhibition quite simply: he said that when he returned from Mexico and Central America in 1987, “the visual elements and the title came together” as he was working to prepare an exhibition. Further discussion about his work and its implications revealed that the show’s title is also partly autobiographical, and that it has complex meanings. Goldchain grew up in a small community with westernized values in the larger environment of a Latin American city, and he points out that “what was really Latin American was outside – I knew of the existence of other and harsher realities, but I was not in direct contact with them. I’m now trying to get this contact in my work, sometimes in a shy and uncertain way…. I use the photographic language of the traditional studio pose – the figure in front of a painted backdrop – and this lends a nostalgic quality. Also, the ‘land’ that is the sum total of the photographs is unknown, but it’s in the process of being discovered – by myself, and by the viewer as he sees the work. I’m looking for a way to find and make images that combine fictionalization (the painted background) with narration (the real figures and events in the photographs) and that visually encapsulate a reality. This way I can tell a story – the painted information and the action or actors in front of it somehow work together – and the story will have, in specific instances, a resonance of cultural and political facts.

“Another way to put this,” Goldchain continues, “is to say that the photographs make discrete statements that comment on certain realities, which can be ironic, tender, sweet or a mixture. What lies in between is the idea of fictionalization; and as the body of work grows, it creates a new reality, which is unknown previous to its creation. As I make photographs, the composite statement – as a territory of the mind – grows… so this is discovery of an unknown land and self, and a psychological drive towards knowing, getting to know, and contact with my own roots.

“I want to go somewhere, make discoveries, and bring them back,” Goldchain says. “My search, or quest, is spiritual and aesthetic, and not really political. I do have certain political positions – very clear ones, this is unavoidable – but I’m not directly addressing my work to this although it does come out if you know where to look. The political issue is one aspect, but not the main one in terms of the readings available in the work. I’m trying to avoid the monolithic, hit-you-on-the-head statement that dies after the first viewing. If you look at the images of soldiers, or the young man with a back wound, there are more readings than just ‘children are hurt by war’ or ‘men are hurt by war.’ There is more to it than that. And a lot of what happens happens by default, because of the way things are. Things happen in the pictures by virtue of the fact that they were there to be seen – I didn’t figure them out. If you look at the wounded soldier in front of the helicopter, you don’t necessarily see him only as the soldier of an oppressive regime – the colour scheme of the image is cool except for his hands and face, which are warm. I’m not there for journalistic reasons, I’m not event-driven, and I’m working in colour, so the colour means something, too – and you see the images in a different way.”

The work in this exhibition is nostalgic, in the sense of references to Goldchain’s own past and to a photographic tradition of posing people in front of painted backdrops; and the land it shows is unknown, in the sense that Goldchain is involved in an ongoing process of discovery in which he and the viewer can share. The brilliance of Goldchain’s colour, the cultural and political undercurrents in the work and Goldchain’s use of the camera’s ability to render detail and isolate the moment all combine to give these photographs an element of real virtuosity. There is much here to be seen, and while the implications may be complex, the seeing is clear, direct and specifically photographic. Writing about his work in 1987, Goldchain summarized his photographs this way: “Above all, they… depict a world that belongs in that hybrid realm of the imaginary and the real, which only photography can conjure.”