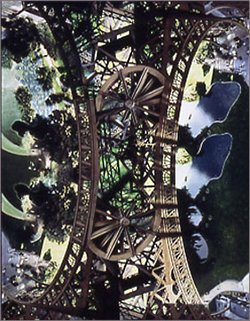 As the saying goes, we see in terms of our education. We look at the world and see what we have learned to believe is there. […] And indeed it is socially useful that we agree on the function of objects.

But, as photographers, we must learn to relax our beliefs. Move on objects with your eye straight on, to the left, around on the right. Watch them grow large as you approach, group and regroup themselves as you shift your position. Relationships gradually emerge, and sometimes assert themselves with finality.

And that’s your picture.

Aaron Siskind, from The Drama of Objects   1.

Aaron Siskind’s comments on seeing, perception and the development of a photographic image lend much to understanding the photo-montage work of Kathryn Dunlevie. While Siskind was talking about a different perceptual process–framing an image in the viewfinder, rather than assembling it in the studio–the idea that ‘relationships emerge and assert themselves’ is very appropriate to a discussion of the work in Not at First Glance, Dunlevie’s first exhibition in Canada.

Kathryn Dunlevie’s interest in assembled images, and the processes through which they are generated, started early. By the sixth grade, she was already cutting fabric for clothing which she designed and made herself; during high school, she worked extensively with photographs and bulletin boards for the school newspaper—projects she now recognizes as her first photographic collages.

Increasingly intrigued with photography, she began making her own pictures in 1969. Studies in art history followed, at Rice University in Houston. She spent her junior year in Europe, primarily in Paris, but she took time for travel to Italy and Spain, where she furthered her interests in art and architecture. Returning to complete her degree, she changed emphasis from art history to studio practice. After graduation, she studied drawing, design and printmaking at the School of the Museum of Fine Arts in Boston, and later, took a formal photography course in Madrid.

In 1982, additional study in painting (in California, where Dunlevie now lives) represented a final phase of her transition to working as a professional artist. Dunlevie also credits her exposure to David Hockney’s photographic work, and an immediate fascination with Hockney’s ideas about photographic representation, as another turning point during that year. Talking about this experience in relation to her own vision, she said,

I saw that the image wasn’t simply a rendition from one vantage point, as it was in the Renaissance, or a mapped-out walk through something, which I learned about from Hockney. I started making images that were not just a walk through a scene but a new scene, in which things would emerge that you might not otherwise see…. Space could be folded–it was a bit like going through the looking-glass. I could combine the perceived objectivity of the photograph with the emotional subjectivity of paint, and create a new pictorial space, which would not be fragmented, but would shift smoothly from one part of the image to the next.

Like Hockney, Dunlevie works in 35mm, using a camera with automatic features. She feels this gives her freedom to “shoot on the fly,” attending to framing and point of focus while allowing camera and film to record light and colour. Not satisfied by working with contact sheets or even 4×6 proof prints, Dunlevie edits her processed transparencies on a light table, trying out combinations from which final images might be formed. The transparencies are then scanned, and output as digitally enlarged C-prints; these in turn become raw material as she explores ways they can be cut and joined. The process of trimming and re-assembling is continued and refined until a new image “begins to assert its own logic.” Finally, the cut and prepared enlargements are glued onto wood panels, and coated with clear acrylic. Dunlevie uses acrylic paints on top of this layer, and it is through painting that the image composite is finally resolved and her vision fully realized. 2.

While Dunlevie achieves the linking together of subjective and objective space that is such a characteristic feature of her work in a number of ways, the painting is key. The ‘folding’ of space in these images (some of which are from the aptly titled series, Urban Revisions) is created largely with paint: the actual photographs are continued as painted images all around the edges of the support panel, and certain elements, particularly architectural forms or spatial clues, are extended from one part of the montage to another by simply painting them in. While evident throughout the exhibition, this technique has particular impact in the larger works, such as Storm Warning, or Car Wash, in which linear forms (flotation lines in a swimming pool, or mechanical elements, gates and scaffolding) are painted so effectively that the new montage has a compelling unity and a surprising sense of spatial logic. What we see is no longer “what we believe is there,” but something altogether new.

When asked about influences other than Hockney, Dunlevie promptly credits both Manet and Man Ray. Particularly in her Paris images, echoes of each artist can readily be sensed. Manet always emphasized the edges and outlines of forms in his paintings; and he dealt with the flatness of the picture plane in a clear, straightforward manner. Yet the space described in any Manet painting is never less than surprising — for all this straightforwardness, a sense of illusion is always present. One has the feeling that this same element of hidden surprise in an apparently logical pictorial space has been adapted to new ends in Dunlevie’s work, just as one notes in her the same love of process and experimentation that so animated Man Ray.

Two images — De La Tour Eiffel and Eiffel Tower Tennis — effectively illustrate this, and Dunlevie acknowledges them as seminal in the development of both her current working method and her approach to spatial rendering. In each, one looks through and around visually repeated elements of the tower’s iron latticework arches, down to an altered ground, which has been doubled, reversed and additionally modified with paint. In Eiffel Tower Tennis, we gaze at the park below, which has been folded in the middle and is rendered upside-down in the top half of the image. In De La Tour Eiffel, we again look down, but at a more complex space, where not every vantage point is mirrored or echoed, and in which grass areas are transformed into painted lagoons. The experience is somehow plausible, but also new. The images give two experiences of perspective, as would a visit to the structure itself: the monument, though famed as a fixed object, is mostly space and air. What one remembers are the experiences of looking. The forms in these prints are both surprising–in the sense of revealing what one could never actually see–and inevitable, in terms of the viewer’s recognition of the visual logic with which they were made.

The East River (Study) is another example of straightforwardness, illusion, experimentation and logic all coexisting in a new image, and if you have ever driven into Manhattan on an overcast day, you know exactly why. A great urban panorama presents itself, but the traffic makes it impossible to look: the closer you get, the less you can see. Arriving, you have a sense of having glimpsed—and also having bypassed—something magnificent, but these impressions overlap, and you cannot recall just one principal feature. All this is in Dunlevie’s image, which represents both a new impression and a memory at the same time. The river is there, and the skyline as well, but two elevated highways are spliced together in the foreground, seamlessly joined by visual logic and by paint. A fascinating green added to the sky calls up both the memory and the smell of heavy, still air in a gridlocked city, but the cars on the highway are clearly in motion, despite their contradictory and unattainable destinations.

Similar approaches to image-making animate Parasols/ Sous-sols and Défense d’Afficher, which display Dunlevie’s sense of the graphic possibilities of the arrested instant. We see life in flux in the individual component photographs, yet frozen in the final composite. In one image (Défense d’Afficher), there are soccer players, tourists, walls and graffiti, all overlapped and layered into a new, constructed moment. In the other (Parasols/ Sous-sols), umbrellas are held by anonymous figures, who are oblivious to the photographer as they drift in front of huge columns. Despite their massiveness, these columns appear supported by the open scaffolding below, through which another perspective is revealed. Each image is held together by structural elements–both found and created–and brought to life by an acute sense of timing, rare in this kind of montage, yet no less important for its rarity. And in each, the combination of photographic and painted image is what makes the visual relationships “appear, and then assert themselves with finality.”

Looking at these images over time, the viewer is increasingly impressed by their logic and clarity, co-existing so comfortably with the elements of surprise and discovery that Dunlevie has imbedded in their layering: they represent momentary phenomena and graphic relationships, yet seem to simultaneously illuminate and obscure them. In developing a new visual syntax, Dunlevie has also found an extraordinarily effective means of communicating multiple meanings: we recognize these images, even though we never saw these places, or these instants, in quite this way.

In this sense, Dunlevie’s work effectively illustrates David Hockney’s claims about photography and painting, and Hockney’s words serve as a fitting commentary on Dunlevie’s photographic process (which could be interpreted as a new variant of analytic cubism), as well as her use of paint:

What’s at stake…in this sort of work is the revitalization of depiction. The great misinterpretation of twentieth century art is the claim…that cubism of necessity led to abstraction…. But on the contrary, cubism was about the real world. It was an attempt to reclaim a territory for figuration, for depiction.

… [The cubists] showed that there were certain aspects of looking – basically the human reality of perception – that photography couldn’t convey, and that you still needed the painter’s hand and eye to convey them….

Art is about correspondences – making connections with the world and to each other. It’s about love in that sense…. We love to study images of the world, and especially images of people, our fellow creatures. 3.

Looking at Dunlevie’s images over time, one is increasingly impressed by their logic and clarity, coexisting so comfortably with the elements of surprise and discovery that she has imbedded in their layering. They represent momentary phenomena and graphic relationships, yet seem to simultaneously illuminate and obscure them. In developing a new visual syntax, Dunlevie has found an extraordinarily effective way to communicate multiple meanings. We recognize these images, even though we have never seen these places, or these instants, in quite this way.