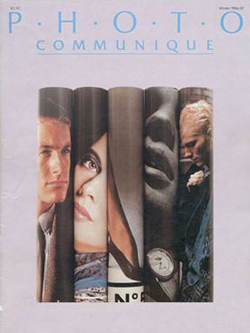 
The freelance photojournalist has always occupied an interesting position in photography. Sharing the freedom of the photographer-artist but often lacking access to the support and exhibition opportunities the latter enjoys, the freelancer is accorded the journalistic status of the agency or magazine photographer, but cannot count on a predictable publication or distribution market. Despite this, photographers who work freelance have contributed much to the world’s understanding of many situations, particularly in the last two decades.

It is doubtful we would have as much visual information as we do about any number of events were it not for the initiative of photographers working on self-assigned projects. This is particularly true of issues and situations having a strong political or emotional charge: often news and press agencies — and even governments — expect reportage of a “sensitive” situation to be limited to a certain point of view, and it is only the freelancer who has the freedom (and sometimes the mobility) to cover an occurrence in any real depth. Yet this freedom can turn into a liability in terms of finding outlets for the work. Philip Jones Griffiths, for example, had difficulties getting his now much-admired photographs of the Vietnam War into print; Eugene Richards and Dorothea Lynch’s collaboration on a book about cancer, Exploding Into Life, met with obstacles at every turn and in the end Richards had to use his own funds in order to get the book published in a form acceptable to him.

Sometimes these difficulties can be overcome when a freelance photojournalist achieves stature as an artist, but then there can be pitfalls as well. Images that receive wide recognition on the basis of artistic merit can, ironically, foster an incomplete understanding. Many people who clearly remember Eugene Smith’s photograph of Tomoko in her bath have only the vaguest memory of the cause of Tomoko’s illness and deformity; yet it was Smith’s stated purpose in undertaking the Minamata project in Japan to document what he termed the “industrial genocide” that resulted from the mindless mishandling of toxic waste by the Chisso Chemical Company.

In some respects Henry Gordillo’s career exemplifies this situation. Gordillo started photographing because of a personal interest in social change, and at first he used photography as an investigative tool. He had been influenced by the work of Dorothea Lange and Robert Capa, and worked in the photographic wing (then directed by Danny Lyon) of the Student Non-Violent Coordinating Committee in New York during the mid-1960s. Gordillo has stated that originally his photography and his politics paralleled each other, but as time went on he became more and more concerned with the visual and expressive qualities of the image, in addition to its informational or political content. As a result he began working more independently. “I wanted to devise projects on my own,” Gordillo says, “[but] in the early to mid-1970s there were no organizations that you could join and it was difficult to place my work. I didn’t see my role as a photographer clearly, although I had the sense that I was going against the stream. While photography as art was coming into its own the type of work that was being promoted was different from what I was doing, and there was a lack of interaction between photographers like myself and photographer-artists. And in the late 1970s, with magazines cutting back, picture magazines disappearing and a general shift to colour, many outlets were further reduced.” For a while Gordillo turned to book illustration contracts: Before You Were Three, published by the Delacorte Press in 1977 and selected as a Book of the Month Club alternate, used Gordillo’s photographs to illustrate a text about the first years of life. Struggle and Lose, Struggle and Win, released by the Scholastic Press (also in 1977) included a portfolio of Gordillo’s images to accompany Elizabeth Levy and Tad Richards’ text about the United Mine Workers.

Working for book illustration markets gave Gordillo an increased concern for the expressive aspects of reporting and image making, and he points out that “the last vestiges of social realism were leaving [the] work” during these years. “More recently,” he continues, “I figured out that what I wanted to do did not fit into any sort of readily available niche, either in terms of photo-journalism or in terms of the photographer-artist. Although I investigate the same kinds of situations that photojournalists do, I don’t just cover events. I think that what I’m doing is art: it’s about documentaries, about social movements, but it’s art — what’s paramount in my mind as I photograph is the look of the image. My observations go into the creative hopper and get re-worked into a photograph… the photograph is basically a beautiful object, and there is no mutual exclusivity between observation and the making of art.”

Gordillo first went to Nicaragua in 1983 on a self-assigned project. The Sandinistas had recently come to power and Gordillo felt that there was the potential for very interesting change in the country. He wanted to document these changes as well as observe and interact with people “away from the beaten path” in order to see for himself what was occurring. During this first trip a particular interest of Gordillo’s was the new government’s attitude toward and experiments with popular women’s organizations. Gordillo feels that “how women and women’s organizations fare is a good barometer of positive social change.” The infrared photograph of the swearing in of a women’s militia unit (since disbanded) in front of the Palacio Nacional is one image that results from this particular interest; but Gordillo’s eye was also drawn to many other aspects of the situation. Work from the first trip eventually included an extensive investigation of civilian life, as well as reportage and interpretive image making centering around the conditions people were facing shortly after the revolution.

In 1985 he returned for a longer period of time (three months) and with a more complex set of purposes. He again wanted to observe events firsthand, but with a conscious notion of maintaining a critical distance in terms of any political bias. (To reinforce the importance of this, Gordillo tells the story of Graham Greene’s response to an invitation to visit Nicaragua, extended by the Sandinistas: “There’s no point doing it, because I’m worth more dead to both sides.”) Gordillo intended to photograph and interview people in the capital, travel in civilian areas and spend time on patrol in an active military zone. Under-scoring his concept that the making of art and the processes of observing and reporting are not mutually exclusive, he stated that he saw his role primarily as that of artist and image maker, particularly while on patrol: “I really wanted to know something about these people in the hope that my understanding would find its way into the photographs,” Gordillo says. “The fact that I was working as an artist gave me the opportunity and flexibility to do that. I didn’t have a deadline and this gave me the luxury of time to interact with people more deeply and to try to have this interaction show in the imagery. The situation in Nicaragua is not at all simple; there are more layers of economic and administrative complexity than most North Americans are able to perceive. And many of the soldiers I talked with, while they felt that it was correct to be there, did say that the effect of war is dehumanizing… for some it was a real struggle to prevent themselves from getting swept up in a killing-fever attitude. They were trying to work out the issue of defence of the country versus a reverence for life, to find some way of maintaining their humanity in what was obviously a dehumanizing situation.”

While Gordillo’s images relate much information they also express much, in ways that deliberately go beyond the confines of photojournalism. Many of the photographs were made with infrared film which Gordillo originally used to overcome the visual flatness of the landscape, a result of using conventional black and white materials. He also used infrared for the beauty of its rendition and for “the unexpected and bizarre qualities of tonal reproduction which,” he says, “seemed to fit in with the bizarre qualities of the country itself. (It is, however, not the people who are bizarre — it’s the situation which is difficult.)” Many of the infrared photographs have a melancholic, forlorn quality — “there is a lot of melancholia in the country,” Gordillo points out — or a slightly sad, surrealistic aspect. A boy peering out the back of a bus on the Pan American Highway, a man clutching a turtle in a nearly deserted plaza, a mother and her children on a bandstand lit up at night and several photographs of market and village life all share this poignant quality.

Gordillo has also photographed himself in a number of situations. Photographing himself with a group of people helped to establish bonds or cement friendships in a different way. Part of his concern with self-portraiture was a personal, expressive one; that the self-portraits give him “a feeling of myself in the place, [and] help me see myself in the place.” Some self-portraits clearly function in this context: a close-up of Gordillo’s face evokes the sensations he experienced while staying at a hotel where a massacre had taken place some time in the uncomfortably recent past, in addition to describing the hollowed-out features of a photojournalist exhausted by a month on patrol.

All the prints are beautiful, made with the artist’s concern for expression and tonal range rather than simply the journalist’s concern for reproduction. The pictures inform and interpret, telling us much about places, individuals, situations, the photographer. Middle-aged faces look ancient; a boy in front of a church and a girl leaning on a hammock have still, sad expressions that contradict their physical ages. Soldier’s faces are sometimes so youthful it is startling to realize the kinds of weaponry they carry; yet the suddenness of a military skirmish can turn a young face haggard, as seen in a blurred photograph of soldiers surprised while crossing a river. A wounded man manages a wry sort of half smile as he looks up from his bed; soldiers laugh at the absurdity of their joke as they introduce “Sargento Gordillo” to his new mule. Four men stand in the meagre shade of two small trees: time passes slowly, and there is not really any place to go. The vegetation is lush but the country looks sorrowful, showing damage everywhere.

Optimism, pointlessness, tragedy and waste intermingle; many dimensions of a situation are examined in Gordillo’s photographs. And the work itself is complex, attempting as it does to create a link between the process of reporting and the making of images for creative purposes. Some of this complexity derives from the situations Gordillo encountered; some results from the role he undertook, working as a self-assigned photographer. The work is involved, committed, participatory and compassionate. Gordillo went to Nicaragua for his own reasons, lived and photographed there at his own risk and returned home with a strong sense of the human dimension of events there. “The people were delightful and the salt of the earth,” Gordillo says by way of summarizing his feelings. “I was moved to tears by their plight and can easily be so again.”