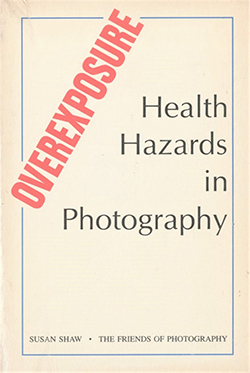 
Photographers and photographic printmakers who do their own processing have always had good reason to be concerned about the effects of long-term exposure to a number of substances. Accurate information about possible hazards has, however, been hard to come by: manufacturers have historically been reluctant to release data and formulas, word of mouth is unreliable, and scientific articles on the subject have generally appeared in publications not widely available to — or widely read by — the photographic community.

Some interest in the topic of health hazards in art was generated by the publication of Artist Beware, written by Michael McCann and released in 1979 by Watson-Guptill Publications. But it has not been until the appearance of Overexposure: Health Hazards in Photography, researched and written by Susan Shaw, that a comprehensive reference work on the potential hazards of photographic processes has been readily accessible.

Susan Shaw has an interesting combination of credentials, having obtained both an M.F.A. in Film and Photography and a Master’s degree in Public Health, Environmental Science and Nutrition from Columbia University. The book is well-researched, well-structured and well-referenced. It is clearly organized by topic, beginning with general issues such as “Can Photographic Chemicals Harm the Body?” (Chapter One), “Safety in the Darkroom and Studio” (Chapter Two) and “Which Photographic Chemicals are Harmful?” (Chapter Three). Chapters Four to Eight deal with various historical and contemporary photographic processes, including photographic printmaking, and the final section covers conservation and restoration issues. The book also includes a trade name index, bibliography and general index. Methods of exposure, ways to minimize or avoid harmful exposure, substitutes for extremely toxic substances and precautions appropriate for any given process or substance are covered in detail. Paragraphs are numbered, and cross-referencing is excellent.

Hazards of ingestion, inhalation, absorption through the skin, contamination of the workplace or reaction with other substances are particularized for all chemistries and usages discussed. Precautionary procedures are likewise listed very specifically, even at the risk of repetitiveness. While some dangers (those involved in the handling of glacial acetic acid, for example) have been known and respected for years, others (health risks of newer substances such as Kwik-Print and Kodak Photo Resists, or recently assessed hazards of older processes such as gum printing) are just beginning to be understood and appreciated. Wisely, the book does not distinguish between these categories but treats each potential problem with the same objectivity, making no assumptions about reader familiarity or common darkroom practice. Shaw avoids generalization, but a reader who wishes to generalize will eventually find patterns emerging: traditional black and white processes tend to be less hazardous than colour, historical or non-silver processes, and most of the substances that are apt to have particularly deleterious effects on health can be classified as pigments, solvents, resists, compounds containing heavy metals, aromatic or chlorinated hydrocarbons, dichromates, preservatives and fumigants, or complex reagents. For someone of average knowledge, there are many familiar caveats but also a number of surprises, such as the fact that carbon arc lamps are quite hazardous to use or that Cibachrome A-11 chemistry, although promoted for amateur home-darkroom use, contains both cellosolve and p-toluene sulfonic acid.[1]

This book is welcome and it has been widely praised. Popular Photography, usually an excellent source of bland and noncommittal reviews, went so far as to declare — in italics, no less — “If you enjoy working in your darkroom, buy this book.”[2] A general social awareness of the environmental and personal hazards of many chemicals used by contemporary industry is finally growing, and Overexposure is certainly a positive contribution to that awareness in addition to being extremely valuable to its intended audience because of its wealth of specific information.

Overexposure does suffer from some faults, which are mentioned without meaning to detract from the significance of the issues the book discusses, but simply to put these issues in context. Shaw’s definitions of “highly toxic,” “moderately toxic,” “slightly toxic” and “not significantly toxic” — definitions upon which most of her discussion of hazards is based — are open to varying interpretations and do not take into account factors such as age, weight, sex, diet and other environmental factors, medical history, smoking habits, allergies or other health problems. As a result, one has to assume a sort of “worst-case” bias in the book which may lead to needless alarm on the part of many who only occasionally enter a darkroom. Also there is ample information about how to protect oneself from hazardous materials, but surprisingly little mention of how to protect others: the consequences of certain materials being flushed down the drain or thrown into the trash, presumably to be incinerated or taken to landfill sites, are mentioned in passing if at all. And there is no attempt to establish any relative scale for the hazards of photographic processes when compared with other known (and often preventable) hazards of modern life. It is interesting that Shaw repeatedly cautions “Do not eat, smoke or drink in the dark-room or studio” and “Do not allow smoking or open flames in the work area,” yet makes no statement about the dangers of smoking itself as opposed to the dangers of handling a given substance.[3]

Insurance companies generally agree that there are more than 38,000 traffic fatalities in North America each year.[4] Figures on handgun deaths top 9,000 [5] and the Globe and Mail reported recently that “A disabling accident occurs on a work site in Canada every six seconds…. For workers in trades such as construction, forestry and fishing, the chances of being injured or killed on the job are higher than those of being injured or killed in a car accident.” [6] One of the ironies implicit in any discussion of environmental hazards, and more specifically, occupational health hazards, is that such discussions tend to ignore the appalling toll taken annually by automobiles, cigarettes, handguns and industrial accidents — in comparison, photographic pursuits must be seen as relatively safe. Statistics Canada, when queried on the issue of health hazards in the arts and in photography, had no figures whatsoever available and did not even know if occupational hazards in the arts were a problem of sufficient magnitude to warrant the establishment of categories and the monitoring of data.

Overexposure should be used as a reference by serious workers and its wealth of prescriptive and cautionary information should be heeded by all, particularly those involved in more hazardous photographic processes such as making daguerreotypes or photoetching. But readers should keep their assessment of risk in perspective, and the book should not be used to discourage all involvement with photographic processes. If Overexposure makes people more careful in the darkroom and the studio, that is all to the good, but it shouldn’t scare anyone away from either place.

Four chemicals, known as glycol ethers, have caused birth defects in every species of animal tested and are suspected of posing a similar risk for human beings. They are used in tens of thousands of products …and come in contact with over half a million workers and uncounted consumers.

Neither industry nor government disputes the danger…. Yet the government has done almost nothing to reduce the threat, and industry’s response to the problem has been scattershot.

P-toluene sulfonic acid is both poisonous and corrosive.