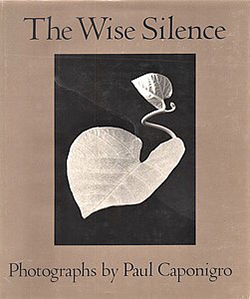 
In a volume of criticism titled The Spirit of Romance, Ezra Pound observes that “There are two kinds of beautiful painting … one looks at the first kind of painting and is immediately delighted by its beauty; the second kind of painting, when first seen, puzzles one, but on leaving it, and going from the gallery one finds new beauty in natural things …. Thus, there are works of art which are beautiful objects and works of art which are keys or passwords admitting one to a deeper knowledge, to a finer perception of beauty ….” He goes on to say that “Dante’s work is of the second sort.” Were he writing about photography instead of literature, and if he knew the work in question, he might well have added that Paul Caponigro’s work is of the first.

The Wise Silence is Caponigro’s most recent book, published to accompany the major Caponigro exhibit which opened at Eastman House last year and which is now traveling to many North American museums. It is, certainly, a “beautiful object” — both in its own terms and in terms of the photographs reproduced within. The entire production has an understated elegance and an admirably high level of craftsmanship, and the book does full justice to its contents, serving as a fine vehicle for Caponigro’s vision.

This volume cannot be faulted as a representation of an important photographer’s work; and yet, beautiful as it is, it could never be thought of as something “admitting one to a deeper knowledge, to a finer perception of beauty.” Somehow there is too much control, too much intellection, too much technique, too much poise in these 143 photographs, when what is needed is more blood, more spirit, more substance and more daring. What Caponigro does well, he does exceedingly — occasionally transcendently — well, as in his best, usually early, studies of natural forms: the photographs made in the Connecticut woods in the 1960s; certain images made in Wales, Scotland and Ireland during the 1960s and early 1970s; and some few landscapes of the American southwest made in the recent past. But there are many empty pages in the book and reproductions of prosaic or repetitive — although beautiful — imagery. And frequently the photographs simply represent the result of a fundamentally mundane idea executed with magnificent control and technique (for example, the images from Caponigro’s 1976 trip to Japan, the photographs made in Alberta in 1978, or the work done in Mexico in 1979).

Caponigro’s flashes of brilliance indicate he is capable of far more than what is included in The Wise Silence. This is exactly the problem: while one cannot help admiring the book for its many qualities, one is not left inspired or challenged or even provoked by fully half of the images it contains. One wonders, also, how often in any artist’s lifetime an opportunity to produce a book of such quality and scope presents itself — and this wondering is reinforced by the book’s pretentious title and by Caponigro’s self-serving preface: “I work to attain a ‘state of heart,’ a gentle space offering inspirational substance that could purify one’s vision. Photography, like music, must be born in the unmanifest world of spirit …. Achieve the mystery of stillness, and you can experience a dynamic interaction with the life force that goes far beyond intellectual thought and touches the deepest wells of existence.”

In light of the above, of which there is more that is not quoted, it seems fair to make some observations. Minor White, although admittedly prone to hyperbole, once commented that Edward Weston’s late photographs from Point Lobos “may parallel in content . . . the late quartets of Beethoven.” Another critic, writing about the work of van Gogh, said that “van Gogh was empowered to see the banners of final reality unfurling within the least thing and most humble person.” Statements of this kind cannot be made about The Wise Silence or about Caponigro’s accomplishment to date — the potential may be there, but the actuality falls far short.