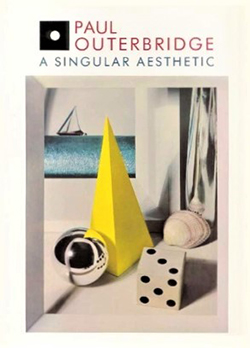 Books such as Paul Outerbridge: A Singular Aesthetic can be counted among the greater benefits of the photography publishing boom. This beautifully produced catalogue raisonné, which grew out of an Outerbridge exhibition mounted by the Laguna Beach Museum of Art in California, includes reproductions of all known images made by Outerbridge between 1921 and 1941 (his most productive years), and is both a fascinating monograph and a valuable reference.

Most people know Outerbridge through an occasional reproduction or mention; some may know a dozen or so of his images through recent articles in American Photographer (March, 1980) or Horizon (June, 1980); a smaller number are familiar with a more sizeable body of work thanks to Paul Outerbridge, Jr.: Photographs published in New York by Rizzoli, also in 1980. Up until the appearance of Paul Outerbridge: A Singular Aesthetic, however, almost no one had any wider experience of this interesting photographer’s total work than these limited sources could provide.

So one’s initial reaction to this book involves appreciation for its quality and thoroughness, the relative intelligence of its introductory essay, its inclusion of so much material (especially worthy of note is the fact that Outerbridge’s own description of his working methods in the Carbro process is reprinted from his 1940 book, Photographing in Color), and its attention to detail throughout. Beyond this, one also appreciates this book as a fascinating yet indirect record of the way Outerbridge grappled with visual and cultural issues in a world that was both post-Cubist and yet still post-Victorian.

Outerbridge started photographing in 1921. He knew Stieglitz, Archipenko, Man Ray, Brancusi, Picasso, Picabia, Duchamp, Dali and Braque, and admired Kandinsky; but he also was a commercial photographer working in New York and Hollywood. His work shows a clear awareness and appreciation of Cubism, Dadaism, Surrealism and Constructivism, yet it also exhibits a conventional formalism and set of social attitudes that would do justice to Norman Rockwell (“The Potting Shed”, 1936, or “Eight O’Clock Coffee”, 1938). There is a dualism in his work that goes far beyond a distinction between “commercial” and “personal” concerns: he switches back and forth from bold abstraction to cloying romanticism or post-Victorian posturing in all his work, be it black and white or colour, photography or drawing, commissioned or self-directed. Going through the reproductions, we see nude studies done with a directness that must have startled a 1930s audience and still lifes that attempt to get as far away from conventional perspective as is possible with a camera; we also see cutesy stone rabbits, one whispering in the other’s ear (Plate 406), trite baby pictures in addition to incisive portraits (compare “Where’s Baby”, Plate 466, with “Study of a Man”, Plate 26), and dated, stale interiors (Plate 229) along with challenging formal studies (“Political Thinking”, Plate 93). We can only conclude that Outerbridge’s cultural references were mixed at best, and look at the extremes in his style as a product of old attitudes and new movements uneasily co-existing with each other in American cultural life between the two world wars.

Some would argue that Outerbridge was not in any sense an original artist but a wild eclectic who borrowed equally from the mainstream of middle class culture and the European-inspired avant-garde, a photographer of great technical ability but almost no capacity to differentiate styles or create works that could really be called personal or new. A fairer view, I think, is one that comes from careful study of Paul Outerbridge: A Singular Aesthetic. With access to over five hundred reproductions, we can see that Outerbridge was not simply a hopeless imitator, but an artist who considered and dealt with all aspects of the value system of his time with varying degrees of success and originality. One might wish to retitle the book “A Plural Aesthetic”, and one might quibble with certain references and judgments in the critical text (I have a little trouble with ” … Stieglitz was the major American proponent of pictorial photography” followed two paragraphs later by “… the work Stieglitz promoted was the product of an increasingly radical examination of the theoretic and formal suppositions supporting the Academic tradition” and other near non sequiturs scattered throughout), but such criticisms are minor. This book stimulates and interests, and does a real service to a rather neglected figure.