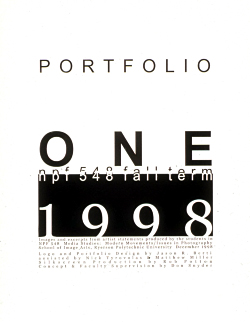 
What we knew when the course began was that photography was changing. The medium had not evolved according to any set of predictions made for it, and most existing histories seemed somehow restrictive or self-limiting. Contemporary theory had intertwined itself with practice in ways that galvanized some image-makers, but baffled others. And it was no longer a given that a photograph represented, in any direct manner, the world we think we see.

Narrative and document, equivalent and sequence had yielded much ground: new agendas could be found in every aspect of picture making, except the pictures we get on our way to the passport office. Many photographers, realizing what had now become possible, either went in new directions or began a reinvestigation of personal, rather than public, concerns.

As we looked into all this, it seemed like a good idea to see who we were as photographers, how we saw, how we thought, how we made pictures, and what we had to say about them. As part of the course work in NPF 548, Movements and Issues in Contemporary Photography, we planned this portfolio, created images for it, wrote about the work, presented it and shared it with each other. Once it became clear that we had the necessary critical mass, the project came together quite rapidly.

The portfolio, produced in a limited edition of fifty copies, displays the original work of all thirty-nine students in the course this year. Prints were made by hand; each person contributed to the project both artistically and financially. Jason Berti, with assistance from Nick Tyrovolas and Matthew Miller, developed the logo and portfolio design, and Rob Potton produced the cover silkscreen. Special thanks are due to them for their efforts on behalf of the entire class.