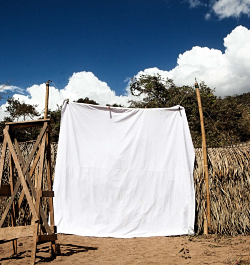 All photographs are made at specific instants and in specific places; yet some, without any loss of specificity, seem to transcend time and place. Many pictures show much but say little; others express great complexity without appearing to show very much at all. And often, photographs are limited by the purpose for which they were made: relatively few are created for their own sake, or for the simple pleasure of seeing.

Timeless, expressive, and completely free of ulterior motive, Wayne Eardley’s photographs always fit into the latter of these categories. The Relative Project shows us what is possible when photographs are made in this way, and the simplicity of Eardley’s approach is also the source of the richness of his images and the depth of their presence, which in turn are the key reasons they remain so vivid in the viewer’s mind.

Eardley speaks of a love for travel dating back to the early 1980s; the project itself began to take form in the early 90s, and is now reaching the quarter-century mark. During these years Eardley has photographed in Brazil, Canada, China, Cuba, Egypt, Germany, Holland, the United States and Zimbabwe; on his website, one can view the work either by country or as a continuous banner of images, and the contrast in the two ways of presenting the work is fascinating. Eardley writes that “this project started out years ago with the idea that we are all genetically related… [that] we share a humanity that is easier seen when context is taken away. Thus, I travel with a white sheet and set up where I can, in parks, on streets, in backyards, on soccer-pitches… the pleasure of photographing all these people gives me a sense of our shared global community.”

The white background, the square format, the use of black and white film, and the deliberate, intentional way of working, in combination with Eardley’s field notes, are all related to the traditions of documentary photography. Yet the photographs are in no sense limited to the documentary genre, and there is no subtext here of the outsider’s gaze or an external agenda. Eardley’s subjects are pleased to be photographed, at ease in their own bodies and their own clothing, comfortable with each other and with the photographer. There is no strain or need for performance: the subjects engage with the camera but do not retreat from its realism. How they dress, what they carry, how they relate to each other—all this shows a sense of freedom, of self-presentation rather than examination by an outsider, and provides a welcome contrast to the emotional rawness of, for example, Avedon’s In the American West. We can look at these pictures with not just a sense of understanding, but also a sense of relief that they are not intended to prove something to us, or to tell us how we should respond to what we see.

In an era of fake news and alternative facts, when “truth isn’t truth” and when journalism itself is under a cloud of suspicion, we can appreciate these images all the more: for their candor, directness, approachability and humanism, for their warmth and affirmation of commonalities among people, and for their positive view of the human condition. We can see this in any single image; viewing the entire project, we can surround ourselves with a deep sense of connection to our fellow beings.