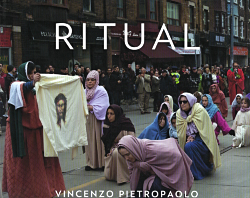 It is actually five decades since Vincenzo Pietropaolo joined his high school camera club and made his first prints in the school darkroom, but his enthusiasm makes it seem like this was only a brief moment ago:

I would borrow a Pentax SV that my eldest brother had, or a small rangefinder called Halina 35X that he had also been given…. But that was only for a short time. I couldn’t wait to get my own personal camera…. I purchased my first camera in 1968, with the help of my father. It was a Canon FT-QL with a 50 mm 1.8 lens. I remember the circumstances well, and also the price: $219.95 plus tax.

I looked in my records, and I found a letter dated August 31, 1970, addressed to Impressions Magazine, in which I wrote, “I am 18 years old, and in my last year of High School. I have pursued photography seriously for almost three years….” That would take me back to 1966-1967.  It’s an interesting letter, since it shows that I was making submissions to magazines, and freely stating my opinions about photography….

Pietropaolo recalls those years vividly, not only for the depth of his excitement to learn this new medium, but also for the intensity of the questions that were pulling him towards it in the first place, which he says arose as early as grade seven: “Who am I?” “Where am I going?”

These questions oriented his work towards the spiritual right from the start. An early memory of his father coming home from work and always taking his boots off at the back of the house is recalled with photographic precision and recounted with an intuitive, deeply-sensed awareness of the value and meaning of everyday ritual; many descriptions of his upbringing in the Italian-Canadian community, with its strong sense of identity and faith, give another indication of this same appreciation. Discussing photographers who first influenced him—Alfred Stieglitz, Lewis Hine, Walker Evans, Dorothea Lange, Eugene Smith, Paul Strand—Pietropaolo speaks of his ‘spiritual parents’ in the medium, and talking about the issues that preoccupy him now, Pietropaolo comes back again and again to matters of the spirit: the photographer’s responsibility for truthfulness, the tensions necessary for good image-making—“you can never rest while you are shooting”—and photography’s potential to show the spiritual aspects of human experience, which he says are universally experienced but seldom represented. “We think of cities as secular, but spiritual expression is everywhere… why aren’t there more images of the spiritual in the history of photography? Why such emphasis on ethnic representation, and so much less on spirituality?”

Certain images [from painting and film]…. Michelangelo, Caravaggio, Pasolini… you see these images throughout history, and they come back again and again… there is even a Sacred Heart of Jesus Tattoo Shop! But photography also is a very spiritual form of expression…. It gets at the spiritual essence of things, it helps you see them….

In one way, I learned about this first-hand from photographing the Good Friday procession over a period of years, gradually coming to understand its humanism and sense of community. My pictures are not ‘off the wall’ or ‘in your face’—people will always know if your intentions are not honorable. I don’t embellish, I don’t crop, and my images are not about power… the story is more important than the individual pictures. Like John Berger in The Seventh Man, I’m trying to tell stories of ordinary people, in a way that makes them spiritual and extraordinary…. The camera has given me a ticket—almost an obligation—to look at the world.

This sense of the spiritual in photography—especially in work, community and ritual—and his personal conviction that the story is more important than the individual image are motifs that run through virtually all of Pietropaolo’s work, in both exhibition and book forms. Three projects in particular exemplify this: Not Paved with Gold: Italian-Canadian Immigrants in the 1970’s (published 2006), Canadians at Work (commissioned by the Canadian Auto Workers Union, and published in 2000), and Harvest Pilgrims: Mexican and Caribbean Migrant Farm Workers in Canada (published in 2009). Made during the same decades as Ritual, these projects reinforce the viewer’s appreciation for what Pietropaolo has accomplished in this volume, his most recent book. Looking into the faces of his subjects, and watching them appear to look back, their gaze meeting one’s own, there is a sense, over and over, of encountering strength of purpose, humility, conviction, tenacity and faith, both revealed and reinforced by Pietropaolo’s impeccable sequencing.

The photographs here are arranged by decade, giving Pietropaolo the opportunity to show both change and constancy over time, and giving the reader a chance to reflect on the cumulative meaning of a ritual procession that has taken place in Toronto annually for more than a half-century. The first sequence, from the 1970s, begins with a simple image of clasped hands, “Midnight vigil in church, after the Good Friday procession, 1972,” and concludes with a complex and angular crowd scene, in which the statue of the fallen Christ is preceded up the church stairs by a large cross. The entire sequence of photographs moves us through this complex narrative, defines the key themes of the ritual—prayer, vigil, faith across generations, preparation and procession, the cumulative drama of the Passion—and also defines photojournalism in the seventies: an art of black and white, careful framing and expressive printing driven by a humanistic perspective, and design considerations tailored to the printed page.

The 1970s in Canada saw the founding of both OVO Magazine and Photo Communique, a proliferation of galleries across the country devoted to photography, and conferences and publications such as Canadian Perspectives, held in Toronto in 1978. Less-remembered, but no less valuable, were publications such as The Globe and Mail Weekend Magazine, which used photography effectively and well: the October 5, 1974 issue ran one of Pietropaolo’s photographs on the cover, and devoted the lead story to “The Italians in Canada: Builders of a New Life”, which reproduced the opening image of Ritual on its first page.

In the 1980s, colour overtook black and white, in both the fine arts and in the fields of journalism and documentary: this was the decade of Sally Eauclaire’s trilogy of books on the emergence of colour photography (The New Color Photography, 1981, New Color/New Work, 1984, and American Independents: 18 Color Photographers, 1989), and of attendant changes in photographic education, critical writing and exhibition practice. Of 34 photographs in this section of Ritual, only seven are in black and white, and they are printed to utilize the tone scale in a more open, naturalistic way. While the outlines of ritual and drama remain constant, in this section of the book Pietropaolo sequences his images to emphasize the public, the outdoor and the colourful, expanding the scope of his reportage to show a more varied crowd, with a much greater awareness of the camera. Some subjects openly pose, and everyone seems to know when the camera is observing them, even though few other photographers appear. This particular mix of self-awareness contrasted with self-abjuration is vividly shown in two photographs from the spread on pages 80-81: both figures carry crosses, but the younger subject questions the camera, while the older casts his gaze downward, still clinging to ritual and devotion.

Pietropaolo’s third sequence, from the final decade of the twentieth century, returns to black and white, and includes image sequences that fold out, making it the visual center of the book. The ritual procession now attracts a larger audience, and is becoming more widely known: statuary figures and participants now arrive from outside Toronto, even outside Canada. In 1998, the Italian town of Recco lent its Baroque crucifix to the event, providing a new form of recognition to the Toronto Italian community. Police direct the crowds, stanchions line the streets, and other photographers are seen more frequently. Working at close range and primarily with wider-angle lenses, Pietropaolo brings the viewer fully into the event; this section reads like a film, foreshadowing the era in which cameras produce both still photographs and video with equal facility. Certain photographs arrest this seemingly filmic quality, and confront the viewer with a variation of the questions Pietropaolo has been asking himself since grade seven; on page 103, a partially-veiled figure seems to ask the photographer, “Who am I? What do I believe?”

Toronto has changed in the millennial years, yet the ritual continues. Participants take selfies; a newscaster comments as Christ stumbles to the pavement, and a CHIN camera records the prone, fallen figure. We even see Christ being made up, blood applied to his face, and signs on local businesses say “Now Open Sunday Brunch” or “Happy Easter”. It feels as if the ritual is more diffuse, more varied, more mediated, but at the same time it feels more inclusive, even somewhat less formal. Re-mixing colour and black and white, interior and exterior, Pietropaolo has found a way to depict these changes, without ever veering away from his deep engagement with, and respect for, the figures who annually stage this ritual. The final photograph in the book shows an almost shocking intensity of devotion, as a scarfed woman gazes at the statue of Christ, her eyes slightly out of focus, but burning with intensity.

What does it mean for our own era, that in a time of global ideological conflict people still come together to re-enact rituals of faith? I think it means a lot; the photographs show this, over and over, and the interview texts reaffirm it: in the words of Giuseppe Simonetta, a founding member of the Lay Committee of the Good Friday Procession, “Without faith, you can’t do anything.”