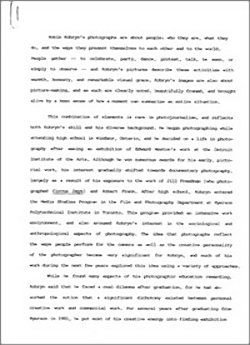 Robin Kobryn’s photographs are about people: who they are, what they do, and the ways they present themselves to each other and to the world. People gather – to celebrate, party, dance, protest, talk, be seen, or simply to observe – and Kobryn’s pictures describe these activities with warmth, honesty, and remarkable visual grace. Kobryn’s images are also about picture-making, and as such are clearly noted, beautifully framed, and brought alive by a keen sense of how a moment can summarize an entire situation.

This combination of elements is rare in photojournalism, and reflects both Kobryn’s skill and his diverse background. He began photographing while attending high school in Windsor, Ontario, and he decided on a life in photography after seeing an exhibition of Edward Weston’s work at the Detroit Institute of the Arts. Although he won numerous awards for his early, pictorial work, his interest gradually shifted towards documentary photography, largely as a result of his exposure to the work of Jill Freedman (who photographed Circus Days) and Robert Frank. After high school, Kobryn entered the Media Studies Program in the Film and Photography Department at Ryerson Polytechnical Institute in Toronto. This program provided an intensive work environment, and also aroused Kobryn’s interest in the sociological and anthropological aspects of photography. The idea that photographs reflect the ways people perform for the camera as well as the creative personality of the photographer became very significant for Kobryn, and much of his work during the next few years explored this idea using a variety of approaches.

While he found many aspects of his photographic education rewarding, Kobryn said that he faced a real dilemma after graduation, for he had absorbed the notion that a significant dichotomy existed between personal creative work and commercial work. For several years after graduating from Ryerson in 1981, he put most of his creative energy into finding exhibition outlets for his photographs, and supported himself with grant assistance from arts organizations and a full-time job working with mentally challenged adults. Gradually, however, he came to feel that he wanted to earn a living as a photographer, and he started questioning the traditional separation between personal and income-producing work.

Building on his experiences in high school, at Ryerson, and as an exhibiting photographer, Kobryn assembled a portfolio that would secure him work as a freelance photojournalist without forcing him to compromise his creative interests or his distinct style. He did not have much success with picture agencies, but as he began showing his work to editors and art directors, he was gratified to find “sane art directors who seem to understand that the documentary style is part of a tradition in photography and that there are people around who can do it – and that my pictures would look effective on the page even though they don’t readily fit into a specific category.”

“There are more opportunities than I ever thought there would be,” Kobryn continued. “You can develop your own way of making pictures if you wait long enough… there is a shortage of photographers who can deal with people well. Textbook editors and government agencies also need photographers of people, and that is another outlet besides the traditional magazine and journalistic markets.” Kobryn emphasized this point when he described some of the ways his photographs had been used recently: as illustrations for a college sociology text, to accompany a story about boating for Toronto magazine; and as editorial or public relations material for T.O., Books in Canada, Now, Today’s Parent, Canadian Lawyer, Harcourt Brace Jovanovitch, Prentice-Hall Canada, the Empire Club, and the Better Business Bureau of Metro Toronto.

“I work with few guidelines,” Kobryn said – “people feel they can trust me. It’s not always easy to work this way, but it is rewarding: you find your way into other people’s lives, spend time with them and get to know them, and make photographs in their environment rather than inviting them into a studio. Sometimes it’s difficult to illustrate a story that has already been written, and I might have to forget about strict adherence to the story line and just make images of the situation, but in the end it usually works out…. I like to make pictures, and then get them out somehow, maybe in magazines, maybe on walls.”

At a time when much photojournalism concerns itself with narrowly-focused “news” issues, or limits itself to a depersonalized, international “photo-essay” style, the need for individual approaches in the field is particularly strong. Likewise, the need for photographs that describe human activities outside the context of conventional reportage is equally strong: we need to know more about how people really identify themselves and how they really behave. In this sense the atypical and the unusual can offer many clues to a broader understanding of human existence. It is not easy to make good photographs and maintain a personal visual style in offbeat situations, but Kobryn does it well: his pictures are distinctive, crisp, visually arresting – and they represent moments we might not think news-worthy, but whose significance we universally recognize.