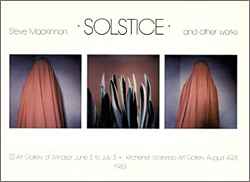 This exhibition of black and white, colour, and Polaroid SX-70 photographs by Toronto photographer Stephen MacKinnon provides the responsive viewer with an extraordinary mixture of representational and symbolic ways of seeing, individual and serial imagery, and work in transparency and print form. According to the photographer, this variety of styles and approaches originated with the slide presentation “Solstice,” which was begun in 1980 and completed the following year. In an attempt to free himself from the constraints of black and white printing, MacKinnon began using black and white reversal materials and started to project the images, with the result that “I looked at every image I made instead of trying to edit from contact sheets. Because of this, I was able to recognize that the image and its meaning were more important than the print by itself, and this change loosened me up a lot — I was able to photograph in a freer way, recognizing and creating connections between the events and feelings of my own life and the style that was emerging in the work. Eventually I became less interested in single images and more concerned with expressing ideas through groups of photographs.”

The orientation of “Solstice”, both thematic and structural, is clearly towards this latter way of working. The slide presentation as a whole deals with the solitary nature of existence and the fact of aloneness; each group of images symbolizes certain aspects of this isolation. In the first section, which is entirely in black and white, pathways appear, turn into obstacles, or disappear one’s way is alternately open and blocked. Many images represent past memory or childhood experience, but the myth of childhood innocence is replaced by a graphically stated frustration, confusion, or repression. The second section also deals with isolation, this time through a ritualistic dream sequence a man and woman encounter and approach each other, finally touching, coming together, blending and separating. But the red-toned images and the impersonal, stylized encounter, devoid of an actual connection even when the figures overlay, serve only to underline the idea that one cannot escape aloneness even through sexual relationship. For the final section, MacKinnon switches to colour imagery as the terrain shifts its visual contour, certain symbols (pillars, crosses), and figures (statuary), appear, offering perhaps the hope that intellect can offer some understanding of existence and its conditions… The images move towards increasingly direct statements about reason and structure; the night sky lightens, and the sun begins to rise.

After the completion of “Solstice”, MacKinnon took his concern for grouped images and sequences In a different direction. Beginning to work with Polaroid SX-70 materials, which he found ideal because of their small size, intimacy, and unique coloration, he discovered that instant feedback made it possible to work on diptychs and triptychs with a degree of control impossible with conventional materials: a situation or image could be adjusted on the spot to create a more effective combination. The Polaroid work covers a wide range, from the figure studies to the individual and serial landscape images, and deals with themes as simple as the emotional satisfaction of making an aesthetically pleasing image, or as complex as the interactions of form, colour, and mood, motion and stillness, the expressed and the implied, and the relation of perception to feeling.

Although a progression can be traced between the content of “Solstice” (and the symbolic and emotional ideas behind it), and the Polaroid work (which uses symbolism and sequential imagery, but to different ends), this exhibition can also be viewed as two distinct components, or simply as two aspects of one artist’s vision. On either level, it will challenge the viewer, both through technique and idea. SX-70 materials are notorious for unpredictability; the subtle variation of colour and density achieved here is no small feat. The notion that images can take on augmented meaning through arrangement in sequences or groups appears simple, but is disproportionately complex in execution. And the fact that one photographer can demonstrate such flexibility should not go unmentioned at a time when most try almost desperately to specialize In narrow, even rigid, visual concerns and ways of working.

This catalogue presents only a sampling of the work in the complete exhibition, but it is hoped that the images reproduced here will provide ample evidence of both the breadth of MacKinnon’s style and the commitment of his vision.