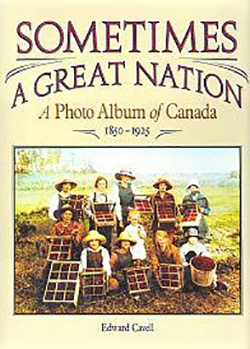 1985 – Sometimes a Great Nation: A Photo Album of Canada


Whether you think of the invention of photography as the historically inevitable marriage of art and science or as a result of experimentation by a few curious individuals, you would probably agree that the fundamental human impulse that brought the medium into being was a desire to record experience. Throughout its existence, photography has served as a means of preserving memories: all practitioners, at whatever level, are involved in a process of giving visible form to perception, occurrence, reaction, moment, idea, symbol or metaphor. Traditional history separates “art” from vernacular uses of photography, and concentrates on the former; but recently the vernacular has become of serious interest to the photographic community. This has caused a curious institutionalizing of vernacular photography, and an incongruous critical attention is now given to many photographs made by often anonymous individuals for the simple pleasures of recording and remembering.

I don’t know where it started — The Family of Man, The Snapshot or Michael Lesy’s Wisconsin Death Trip — but at present there is a plethora of exhibitions and publications devoted to “snapshot” or “album-type” photographs. Edward Cavell’s Sometimes a Great Nation: A Photo Album of Canada, 1850-1925 seems at first glance to be a prime example of this type of publication, for Cavell himself introduces it as such:

This is not a history. It’s a visual journal, a personal account…. It’s a photo album of the Canadian family during a seventy-five-year period in which both our nation and self image were formed. It’s a personal, eclectic, often whimsical selection of photographs….

A collection of nearly two hundred images made between 1858 and 1927, Sometimes a Great Nation has been assembled with the affection and enthusiasm of the true amateur, and on one level it is a charming addition to the list of books devoted to snapshots, photographs from the past and evocations or memories of what we think of as better, less complex times. On this level you can enjoy it, praise it more or less highly depending on your estimation of the album-book genre, and let matters go at that. But while this book will surely please the nostalgia buff’s uncritical eye, it also deserves recognition as one of the more thoughtful and well-produced photograph collections to appear in some time.

Cavell has several books to his credit already, and he has developed both good critical judgment and a broad knowledge of the history of Canadian photography. He did careful home-work for this volume, as the credits indicate: twenty-four collections and archives (most of them public) provided the material for Sometimes a Great Nation, and the list of plates makes it clear that Cavell has used his many sources with skill and intelligence. The thirteen-page introduction, in which Cavell sketches a history of Canada in addition to discussing the photographs, is erratic, mixing valuable information and insight with simplistic or derivative ideas (particularly awkward is the borrowing of John Szarkowski’s “mirrors and windows” terminology, which was bad enough when Szarkowski was using it),but this is the single fault in an otherwise exemplary production.

Another factor in the success of Sometimes a Great Nation is the fact that it relies primarily on images by photographers of real merit. It isn’t a surprise to find the work of William Notman and the Notman Studio, H. L. Hime and William James playing a prominent role here. But it is a pleasure to see recognition accorded to so many others, including Alexander Henderson, Samuel McLaughlin, Charles George Horetzky, Richard and Hannah Maynard, Richard H. Trueman, Oliver B. Buell, Geraldine Moodie, Elliott Barnes, Byron Harmon, Eugene Michael Finn, William Hanson Boorne and Robert E. Holloway. So this is not just a “photo album of the Canadian family” as Cavell ingenuously claims — it is also a serious representation of the accomplishments of many Canadian photographers. Amateur and anonymous work does make its appearance, but in justifiable proportion and reasonable sequence, and always with some visual logic.

The book is also well-designed. Scott Thornley, the designer, deserves mention for a graceful and appropriate layout, with a commendable scarcity of images that run across the gutter. The printing is superb — Dai Nippon did an excellent job on both colour separations and printing, to the point where one has to wonder if the originals really did look this good. Paper, binding and dust jacket are likewise of the first quality, and the book is a sensible size. (If you doubt the importance of these matters, compare Sometimes a Great Nation with the shoddily produced American Album, a collection of photographs published by American Heritage.)

Finally, the photographs are not just attractive or of historical value; they really are interesting to look at. Cavell has wisely avoided the temptation to make the past seem unremittingly pleasant, with the result that it seems very real. Some images are funny, some are painful; a few show violence, hunger or grinding hardship conditions as extant in the good old days as now, despite the filters of legend and selective memory. Certain photographs haunt the mind: a lone skull on the prairie, three bachelors sharing a grubby bed, a figure huddled in blankets in a graveyard at Fort Qu’Appelle, a homeless victim of a fire and a ward of the Children’s Aid Society. Other photographs are remarkable character studies — among these are a portrait of D’Arcy McGee, Geraldine Moodie’s Eskimo portraits and the unintentionally ironic shot of the “Imperial Kouncil of the Kanadian Knights of the Ku Klux Klan” made by Stuart Thomson. The exuberance of growth and the pleasures of life are shown along with the trials of establishing a nation in such huge and difficult terrain, and the book includes many wonderful vignettes, more than can be mentioned individually. There is an easy flow to the images, which indicates careful selection and skillful editing. And no image is ever less than interesting, a claim that few books of this type can make.

Sometimes a Great Nation steers clear of the pitfalls of the album format, while serving the needs and impulses that lead people to make and look at albums in the first place. This is a significant achievement: Cavell has used and transcended a form, much as David Heath did with the slide/sound presentation, “le grand ALBUM ordinaire.” And as with “le grand ALBUM,” the viewer is rewarded with a closer understanding of fellow beings and recent past. I liked this book a lot — in fact, I can’t imagine anyone not liking it. Certainly it is Cavell’s best book to date, and it may well be one of the best collections of Canadian photography now in print.