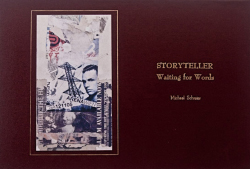 Wigged, alert and expectant, a street performer in whiteface glances beyond the frame to his right; something has caught his attention. We follow his gaze, re-read the title of this book, and turn the page. The storyteller looks away from us. We look away from him, and into Vienna, the city whose architecture frames his face.

Right from the beginning, it is clear that this work is about looking, about the direction of the gaze, about the seen and the unseen, the stated and the unstated. As we progress through the sequences, other themes appear: the intersecting of past and present, place and memory; relations among photographs, words and markings; and tensions between the described and the expressed.

Michael Schreier spent a month in Vienna in September 2007, on a journey back to his roots. It was a journey of some complexity. During the days, he made nearly six thousand photographs, each stamped with the moment of its exposure. At night, he made notes. The following year, Storyteller/Waiting for Words took form.

Mozart worked in Vienna; so did Haydn, Beethoven, Schubert, Brahms, Bruckner, the Strausses, Zemlinsky and Schoenberg. Freud lived and wrote there. The city’s legends are built on such facts. The Hapsburgs, whose bloody and uncertain rule over Austria began in 1278 and lasted until 1918, used Vienna as a center of power. The Nazis used it as well, their occupation marked off in years rather than centuries.

Vienna aspires to genius but is stained by its history. Memories are embedded in the architecture. Over a part of the destroyed synagogue of Or-Sarua in the Judenplatz, burned during the persecutions of 1420-21, now stands the Simon Wiesenthal memorial to the Austrian victims of Nazi purges; Rachel Whiteread’s structure is disconcerting and impossible to ignore. Viennese graves are defaced with graffiti; words are missing, changed or added. Freud’s image is locked in a shallow glass case; through other sheets of glass we look out on barren spaces. Polished handrails are ungrasped, chairs empty, streets unpopulated save for the statuary and one shadowy figure, walking away. We glimpse the back of a man’s head and see an occasional face, each a reverie interrupted. Tod ist Ruhe (“Death is Rest”) is carved somewhere in stone, but no one believes this, so the translation of Ruhe shifts to “Silent”, somehow a more tolerable word.

“One of the major experiences of our time is the experience of loss,” says Schreier. “In order to gain memory, you have to experience loss…. A city’s architecture is a portal to its past, but a sense of loss is always there, and people have to come to terms with that…. The gaining of knowledge and the acceptance of loss is not based on rationality but on something more subtle, something with a constant push and pull … there is a constant struggle—with the problem of loss, the problem of human presence, the problem of identity. For the Viennese, it has taken a long time to acknowledge this…”

The photographs, elegiac and painterly, deal with these problems directly. The quiet light, deep color, and complete stillness of each image contrast with the precision of the date-stamp numbers—but these, ironically, are faded, almost lost, even though they identify a photograph by day, hour, minute and second. The order and juxtaposing of images gives the narrative a sense of urgency without compromising the silence of each picture; the texts support this, pointing us gently towards a deeper reading of the images. Blue, silver, gray and ochre tones are occasionally offset by red, orange, even green or pink, bringing life and warmth, and a sense of hopefulness, to the pages.

The book has an elaborate overall structure, an imbedded literary agenda, a completely worked-out political stance, and a clear sense of time and place, yet the images flow so evenly, with such intuitive correctness, one feels no effort in apprehending all this. Schreier’s gift to the viewer is to make the vision seamless, yet simultaneously invite a deeper contemplation of each layer of the work. In the end, Vienna appears as a place holding beauty as well as grief, a place made more complex and fascinating by the expressive richness of the themes Schreier so thoughtfully explores.

The Vienna Portraits, excerpted from a larger sequence, complete Storyteller/Waiting for Words. Unlike the figure in whiteface, who glances away and out of the frame, these individuals look directly at the camera, coming to terms with themselves, with being photographed, with Schreier’s questions to them and their conversations with him. In a way, they are descendants of the Hapsburg subjects, but now on the path toward self-knowledge: vulnerable, human, willing to look, willing to be looked at; in the present, and in the pictures.

A selection of images from this exhibition, with an accompanying article by exhibition curator Alice Dixon, has been published in the Spring, 2005 issue of PhotoEd.