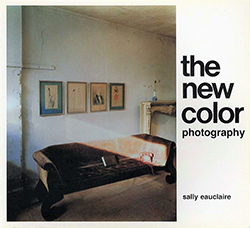 
Bookstore habitués may have recently noticed several new paperbacks on the shelves: called “no-frills” books, they represent common genres (mystery, science fiction, romance, etc.) and clearly state on their covers “Complete with Everything — Corpse, Mysterious Caller, Private Detective, Rain.” In similar fashion, The New Color Photography comes complete with many typical features of contemporary photographic anthologies (“new” critical premise, lengthy essay, abundant reproductions, glossy paper), although it does not go so far as to list these features on the jacket. The photographs are enjoyable, but the book as a whole presents so many problems it almost becomes a classic example of good intentions gone awry.

Consider Sally Eauclaire’s opening statement that “Colour photography came of age during the decade of the 1970s, when many of its practitioners energetically probed its special capabilities. . . . No longer confined to the Procrustean bed of painting styles, living or dead, it emerged as a distinct art form with a unique visual syntax.” Well, that’s okay, but in defense of this hypothesis Eauclaire systematically declares the pre-1970 colour work of Paul Outerbridge, Eliot Porter, Ernst Haas and Irving Penn to be second-rate in one way or another (“Working out in the world, where directorial control . . . [is] difficult to attain, color photographers mainly fumbled and floundered until around 1970 when they modified their traditional naturalistic priorities”). She neglects to mention much colour work considered significant (Lartigue’s Autochromes, Steichen’s Autochromes and Kodachromes, Penn’s Moments Preserved) and entirely ignores Gjon Mili, Arthur Siegel, Gisèle Freund, Syl Labrot, Henry Holmes Smith, Harold Edgerton, Gordon Parks, Lennart Nilsson, Eliot Elisofon and John Dominis — all of whom have been influential in one way or another, and all of whom used colour extensively and effectively before the magical date of 1970.

By the time we get through all this, we have looked at 166 reproductions, learned that Joel Meyerowitz’s view camera weighs forty-five pounds, been told that “telling the truth about the subject is not enough” for a modern documentary photographer, seen that Mitch Epstein’s pleasant Nepal postcard image (plate 135) is really an example of how “interconnecting fields of color and texture converge from disparate spatial locations in the scene” and how “Fugal methodology dictates a more precise, ascetic means of achieving pictorial climaxes”, figured out that Eauclaire studied art history, and discerned that most of the photographers in her book probably like Walker Evans, Robert Frank, and Lee Friedlander. We begin to wonder just what all these categories really mean, and just how “new” the new colour photography is, so we turn to the biography section, which is by far the most illuminating chapter in the book.

Of the forty-seven photographers included in The New Color Photography, forty-two are American, thirty were born between 1940 and 1950, many have graduate degrees, and eighteen combine photography with ongoing work in other media or came to photography from other media or other disciplines (painting, film, sculpture, design, conceptual art, philosophy, chemistry, biophysics). Looking more closely, we see that these photographers draw their influences from a pretty well-established group of artists and photographers: Vermeer, Atget, Walker Evans, Muybridge, Cartier-Bresson, Emmet Gowin, Garry Winogrand, Joel Meyerowitz, Robert Heinecken, Imogen Cunningham, Robert Frank, Minor White and Nathan Lyons are all credited as influences by the photographers themselves, and Cartier-Bresson is mentioned more frequently than anyone. It doesn’t take a brilliant analytical mind to deduce that these new colour photographers have a lot in common: age, circumstance, education, nationality, influences and cultural bias. More importantly, the biographies tell us that The New Color’s warped judgments about how and when the medium developed, its questionable categorizing of work, and the eclecticism and inconsistency of the work itself are all inevitable results of a selection process which represents such a narrow group of photographers, many of whom became photographers through education rather than experience.

Ultimately, The New Color Photography is not about new colour photography but about what happens when a curator’s critical viewpoint comes from another medium, when an editing process does not represent the totality of an activity (although the title makes us expect at least a wide cross-section), and when slick production takes the place of real content. There are good photographs in The New Color Photography, but nowhere near enough to justify its title, size or price.