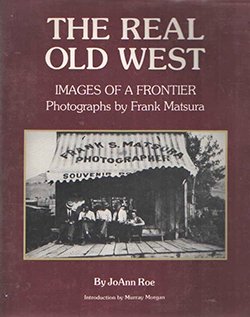 
The Real Old West: Images of a Frontier
Photographs by Frank Matsura

The “new talent from the good old days” syndrome in photographic book publishing, which began with books such as E.J. Bellocq: Storyville Portraits and has continued with the likes of Disfarmer: The Heber Springs Portraits, has recently brought forth two similar volumes: Harry Smith: Magic Moments (“Photographs by a San Francisco Youth 1900-1913”), published by Stephen White Editions of Los Angeles, and The Real Old West (“Images of a Frontier / Photographs by Frank Matsura”), released by Douglas & McIntyre of Vancouver.

Each book has a lot of charm, each was a labour of love for those involved and each presents virtually unknown work from just after the turn of the century. Frank Matsura, a Japanese whose origins are hardly traceable, came to the Okanogan Valley in the Pacific Northwest in 1903 and photographed in that region until his death in 1913. His glass plates came into the hands of the Okanogan County Historical Society in 1964, and were noted by JoAnn Roe (a Washington State journalist and photographer then working on a regional history) some ten years later; The Real Old West is largely the product of her interest and effort. Harry Smith, one of six children born to a Danish family in San Francisco, was a self-taught photographer who made images of family, friends, places and events in the San Francisco area between 1900 and 1913. His work was acquired by the gallery owner Stephen White in 1976; Harry Smith: Magic Moments is similarly the end product of White’s fondness for and involvement with Harry Smith’s photography.

From a historical point of view the Matsura book is considerably more important than Magic Moments. The Real Old West contains far more images, a greater variety of subjects, locations, attitudes and visual approaches, and vastly more raw information about a region and an era. Although stylistically mixed and somewhat erratically laid out, it provides a rich experience for the careful viewer. One sees many places, all seasons, a remarkable number of groups and individuals, and an incredible variety of events and circumstances, all photographed with an evident affection and fascination. Matsura was reportedly very popular with his Okanogan subjects; the ease and grace with which people, both old and young, Indian and white, posed for him is testimony to his popularity as well as his involvement with all aspects of life around him.

Harry Smith: Magic Moments is almost the obverse of The Real Old West. As a photography book, it is more satisfying, with better reproductions and layout and a far more consistent visual “feel”; as a record of virtually the same years in a different place, it is spotty and irregular and nowhere near as complete. Smith stuck close to home and involved himself primarily with relatives, acquaintances and familiar locations. Although he made a few excursions and extensively recorded the aftermath of the San Francisco earthquake, his photography was personal and reflective rather than exuberant and curious like Matsura’s. He had a finer sense of visual balance and a more distinct style than Matsura, at least judging by the work selected for these two books, and seems to have been as concerned with pictorial elements as he was with information, but he did not photograph as much or as widely. His output is nostalgic and evocative, but not terribly rich in specifics or broad in scope.

I would commend either book to anyone interested in regional photography from the first decade of this century. Both volumes provide pleasure and satisfaction (although of a relatively unchallenging sort), and the kind of contact with the recent, still-visible past that a rather disjointed contemporary society seems both to need and to enjoy.