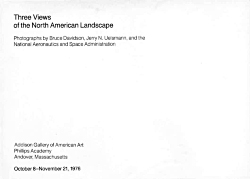 This exhibition grew out of an interest in the work of Bruce Davidson, Jerry Uelsmann, and the images that orbital and space flight have recently made available. Its present form resulted from a feeling that these photographs make a mutually reinforcing and visually effective combination as well as a powerful cumulative statement about what in the widest sense can be called the American landscape.

Physical description, social documentation, and psychological interpretation are real elements of the exhibit, but it would be limiting to think of such terms as either categorical or exclusive. NASA photographs, showing location, scale and density of human activity, are sociological commentary no less than physical evidence; and the abstract power of these images complements their utility with remarkable expressive qualities. Jerry Uelsmann’s landscapes also present physical actualities; his iconography contains much specific human history in addition to components of fantasy and intuition. Likewise, Bruce Davidson’s photo-essays are not simply “documentary” but encompass a variety of attitudes and many realities beyond their observations about the cause-and-effect relationships of our current society.

Few of these photographs have been previously exhibited in this region and a large number are being seen for the first time. An exhibition which presents work by these major artists in combination with NASA’s resources, and which explores the documentary and interpretive possibilities of the medium seems particularly appropriate during the Bicentennial year.

The Addison Gallery gratefully acknowledges the cooperation of Bruce Davidson and Jerry Uelsmann, each of whom made a wide selection of their work available. Thanks are also due the National Aeronautics and Space Administration for their generous assistance. Both the exhibition and catalog are supported in part by a grant from the National Endowment for the Arts in Washington; without this interest and support the project would not have been possible.