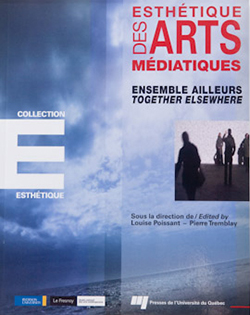 2009 – Together But Elsewhere: Considering the Photograph


Writing in 1760, the French novelist Tiphaigne de la Roche described a storm in the deserts of Africa which carried him, airborne, to an Eden-like setting on an unknown island. There he was led by a spirit, the island’s Prefect, through passages in a cave into a hall where he encountered a startling image: a view of the ocean, seen from a window so real in its appearance that as he moved closer for a better look, he banged his head against the wall on which the image was inscribed.

The image was what we would call a photograph. The Prefect explained its making:

Thou knowest that the rays of light, reflected from different bodies, make a picture and paint the bodies on all polished surfaces, on the retina of the eye for instance… The elementary spirits have studied to fix these transient images: they have composed a most subtile matter, very viscous, and proper to harden and dry, by the help of which a picture is made in the twinkle of an eye….

The “subtile matter” was coated onto canvas, the sensitized canvas held up in front of the desired subject, briefly exposed, and

immediately carried away into some dark place; an hour after, the subtile matter dries, and you have a picture so much the more valuable, as it cannot be imitated by art nor damaged by time.

This “picture” was so vivid and seemed so authentic that it caused the writer not just to knock his head but also to question his accepted notions of reality:

The justness of the design, the truth of the expression, the gradation of the shades, the stronger or weaker strokes, the rules of perspective, all these we leave to nature, who… draws upon our canvas images which deceive the eye and make reason to doubt, whether, what are called real objects are not phantoms which impose upon the sight, the hearing, the feeling, and all the senses at once.

A sensible spectator…feels not more lively impressions: such images are equivalent to the things themselves.[1]

Tiphaigne’s text is an interesting one. It envisions a new medium, called into being by the human imagination, yet completely grounded in optics, physics and chemistry; and it begins a debate about the nature of photographic representation that continues to the present. Photography’s inventors realized this vision seventy-five years later, through procedures remarkably similar to what the Prefect showed to his visitor: both Fox Talbot’s and Daguerre’s systems involved chemical formulations, the coating of surfaces to sensitize them, image development in darkened chambers and a quest for image permanence. Their results — optical tracings from, or indexes of, an actual world, generated a host of questions about reality, its representation, and whether this new medium enhanced, degraded or served as a surrogate for lived experience.

Less prominent but equally interesting in the text is another question, which Tiphaigne voices simply: By what miracle do I see the ocean in the center of Africa? He feels himself to be in one place, yet virtually sees another. The notion of an elsewhere, actualized through images, seems to have been well-imbedded in the photographic medium even before this new technology of picture-making crossed the threshold of its own invention.

Fascination with photography spread as its technologies evolved. A half-century after its parallel beginnings in France and England, the practice had become global, industrialized and available to any with sufficient means. Questions about photographic representation extended in new directions. What might be seen though photographic methods that was unavailable to the eye? How could time be arrested, space compressed, motion represented, sound recorded? What other media could photographic images engender?

Another vision of yet-to-be invented media — plausible, desirable and answering the twin calls of technology and the imagination – was articulated by Eadweard Muybridge in lectures and writings from the late 1880s. While presenting his just-published series of photographs showing animals and human figures in motion, Muybridge also spoke at length about various optical and mechanical devices that could be utilized in new ways, to give the viewer an impression of continuous motion through rapid, intermittent display of sequential images. He first described the zoopraxiscope, which we now identify as a forerunner of the cinema projector, and went on to make other claims:

The combination of such an instrument with the phonograph has not, at this time, been satisfactorily accomplished. There can, however, be but little doubt that in the perhaps not-far-distant future, instruments will be constructed that will not only reproduce visible actions simultaneously with audible words, but an entire opera – with the gestures, facial expressions and songs of the performers – will be recorded and reproduced by an apparatus combining the principles of the zoopraxiscope and the phonograph, for the instruction or entertainment of an audience long after the original participants shall have passed away.

And if the photographs should have been made stereoscopically and projections from each series be independently and synchronously projected on a screen, a perfectly realistic imitation of the performance will be seen, in the apparent round, by the use of properly constructed binocular glasses….[2]

Muybridge’s visions were all realized; whether in film, video, digital imaging, stereo projection or virtual reality applications, the media he predicted with such confidence (and such faith in technological determinism) now surround us just as he imagined images and sounds surrounding the audiences of his own time. Only telecommunication technologies eluded his predictions, but one could argue that he would have eventually foreseen them also; and as a one-time fugitive from justice, perhaps the telegraph interested him less than visual media.

For Tiphaigne, a photographic image created the possibility of virtual presence, an access through images to a limitless elsewhere. Muybridge’s imagined theatrical projections, while rooted in an assumption that people would assemble together for these events, also assumed a limitless elsewhere, since both images and sounds could come from any external source or subject, be recorded in any place, and be re-created at any point along a flexible chronological line stretching indefinitely into the future. Once the means were in place, any occurrence, person or phenomenon could be preserved and re-presented, and thus recalled with exact fidelity.

The sense of wonder associated with early photographic practice gave way in the 19th century to a sense of excitement stimulated by accelerating technology, and a desire to see new phenomena in new ways, scaled in new dimensions. As photographic and related media practices embedded themselves more deeply in social and cultural relationships in the 20th century, they inevitably became agents of political representation as well: every war, revolution movement or disaster since the Russian Revolution has its accompanying media and image archive. These were originally recorded and assembled by agents of a state, employees of media organizations, or members of political groups, but the reach of media has now exceeded and subverted almost all attempts to control it. Almost exactly a century after Muybridge predicted moving image media, Pico Iyer reported back from a tour of Asia:

Suddenly, then, America could be found uncensored in even the world’s most closed societies, intact in even its most distant corners. Peasants in China or the Soviet Union could now enjoy images of swimming pools [or] shopping malls…inside their own living rooms; remote villagers in rural Burma could now applaud Rambo’s…heroics only days after they hit the screens of Wisconsin; and the Little House on the Prairie was now a part of the neighborhood in 108 countries….

More important, the video revolution was bringing home the power of [these images] with greater allure and immediacy than even the most cunning propaganda. Already, the ruling mullahs in Iran were fretting that their capital’s…Michael Jackson clubs could easily turn into revolutionary cells. And I once heard one of Washington’s senior policy veterans [claim] that the single issue that most exercised the Soviets was not the nuclear arms race, or the war of espionage, or Afghanistan or Nicaragua or Cuba, or even the rising confidence of China, but simply the resistless penetration of video.[3]

While Muybridge celebrated the development of new imaging systems as evidence of human skill and human development — and seemed to believe it would always be driven by a natural human curiosity – Iyer points his readers towards another phenomenon, playing out ever more actively as lens-based and digital media converge and aggregate. The political force of photographic and related media images is not at all in dispute, but it seems far less predictable, and certainly less rational, than the representational power of the systems Muybridge envisioned.

And as this essay is written there is different news from Iran, video has already been eclipsed by web-based media, and systems of dissemination and censorship are in furious and unpredictable conflict with each other. We are there, together and elsewhere simultaneously, but our once-new wonder at photographic representation, admiration for technical development, or hope for true democratization of media is accompanied by other feelings, some far less comfortable.

The development of media and imagery into an omnipresent and barely controllable stream has brought with it a sense of disempowerment and sensory overload, far removed from the sensations Tiphaigne described on first seeing a ‘photographic’ image. Paul Virilio writes eloquently of this in the preface to Unknown Quantity:

“Accumulation puts an end to the impression of chance.” When Freud…penned these words in 1914-15, he could not know how true they were, since the end of the second millennium was to see the accumulation of excesses of all kinds, including two World Wars, forty years of the balance of terror, and an unprecedented proliferation of major accidents….

…[T]he exhibition “Unknown Quantity” aims to provide a counterpoint to the excesses … with which the great news media swamp us daily, a museum of horrors, which no one seems to realize always precedes and accompanies the upsurge of even greater disasters….

By progressive habituation to insensitivity and indifference in the face of the craziest scenes, endlessly repeated by the various “markets of the spectacle” in the name of an alleged freedom of expression that has transformed itself into a liberation of expressionism – if not indeed an academicism of horror – we are succumbing to the ravages of a programming of extravagance at any cost which ends not any longer in meaninglessness, but in the heroicization of terror and terrorism.[4]

And Andreas Vowinckel echoes this sentiment with his claim that “human beings are still running away from themselves, escaping into “pictures” of a reproduced reality, a reality created by media in language, photography, film and electronically registered digital images, in which we believe more readily than ourselves and our real lifes (sic).”[5]

No single position or point of view can address all the variables of our current media environment, or fully assess the enabling aspects of media imagery (a sense of togetherness and shared humanity) or the distancing elements (distraction, ennui, escapism, alienation, fear and terror). No technology has provided such a sense of shared humanity or engendered such a sense of isolation. We no longer accept illusion and would never walk into the wall in Tiphaigne’s cave. Yet the image he described had certain properties, and even as a representation of reality, it possessed a certain durability. And, when led into a Gallery of such images, Tiphaigne could not but renew his amazement:

In each picture, appeared woods, fields, seas, nations, armies, whole regions; and all these objects were painted with such truth…[that] I could not tell, every moment, whether what I was viewing…was not a painting, or what I was looking at in a picture was not a reality.

Survey with thy eyes (said the Prefect) survey the most remarkable events that have shaken the earth and decided the fates of men. Alas! What remains of all these powerful springs, of all these great exploits? The most real signs of them are the traces they have left upon our canvases in forming these pictures.[6]