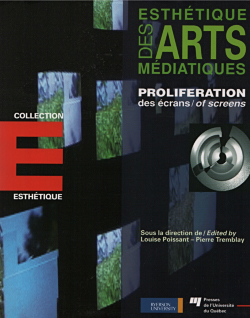 2006 – Toronto/Montreal: The Proliferation of Screens

A warm welcome to everyone, and many thanks to all who helped organize this conference, as well as to those who are here as participants.

My formative media experiences occurred in the early years of television and at the beginning of the Cold War. Encased in large boxes that served as surrogate furniture and which dominated so many living rooms, the single, flickering screens of that time projected reductive messages of a struggle of nations, a struggle between pyramidal societies using media to centralize information and symbolize power. One image on those screens was unforgettable: the mushroom cloud of the above-ground nuclear test. Endlessly repeated, it was skillfully supported by corollary images of missile parades and missile launches, made more terrible-seeming by the black and white of the screen and the jerkiness of the broadcast signal.

As screens and media now proliferate in a post-Cold War situation, it seems that societies are also shifting in structure, away from the ideologies of centralized nation-states towards a new kind of tribalism: the struggle is now one of group or faith, cultural belonging or religious fervor, with clamoring sub-groups and sub-factions all arrayed each against each other. The unforgettable images of our era still flicker, but they now have multiple facets, blending together in an omnipresent distributed and networked screen environment. Huge or tiny, fixed or portable, secure or accessible, our new screens are vivid, streaming, constant, inescapable: a new source of light for the radiant/radiating city.

It appears as a given that the progressive decentralization and dispersal of screen media also follows a perceptual process that began with Cubism and continues to accelerate. We see new, fragmented and non-linear narratives, new representations of time and space, shifts in description of character, frames within frames, windows within windows, scrolling, floating, drop-down, pop-up, split fields and image and text: cubist, futurist and constructivist adaptations for the digital era.

But screens proliferated before the last century. In an April 2001 lecture at the Cinematheque Ontario (“Light Into Darkness: Filmmaking Before 1300 A.D.”), filmmaker and stained-glass artist Jerome Hiler pointed out that “what we call cinema today is a celebration of a series of inventions, [previous to which] there had been innumerable situations in which light, color, projection and other effects were used to create environments of visual intensity where the inherent illusions of perception were let loose. During the Middle Ages, the cathedrals of Europe were the grand theaters that reflected the life of the community….”

Gothic stained glass has many elements that parallel current screen environments: the glowing screen, the sequential or symbolic narrative combining image and text, the geometry of the frame and related visual sub-fields, the use of proportion, symbolism, iconography, abstraction, color and distortion, and the overlapping of sense perceptions. Looking at these windows as screens, they can be considered as precursors of our own era just as readily as they can be seen as historical artifacts from another time or place.

Screens and complex visual fields proliferated in other forms and other eras: medieval and later maps, Byzantine art as early as the fourth century or as late as the fourteenth, Celtic and Carolingian illuminated manuscripts, Romanesque and later tapestries, Islamic manuscripts from at least the 1300s. In non-western cultures, visual fields multiply and overlap in the Mandala tradition, the Japanese screen tradition, and both Chinese and Japanese landscape imagery and calligraphy; we find multiple screens and visual fields as far back as Egyptian reliefs from the Old Kingdom. Gauguin’s “Where Do We Come From? What Are We? Where Are We Going?” combined images and text and multiple perspectives on a painted surface as early as 1897; twentieth century artists and calligraphers from Miro to Apollinaire to Hans Schmidt did the same with images and texts on paper. C. J. Minard, E.-J. Marey, and Eadward Muybridge combined multiple views in related frames for information display; Fernand Léger’s “La fin du monde” (1949) uses overlapping and proliferating images in ways that prefigure and simulate the kinetic energy of contemporary multiple screens.

Seen in this context, the atomization and redistribution of image elements, and the delivery of these elements to and by proliferating screens – the subject of this conference and such a prominent feature of our environment and our culture – is not so completely new, nor is it simply a manifestation of a radical enabling technology or a changed political landscape. The use of multiple images to represent information and experience, and the strategies that animate these images on screen, are all extensions of existing forms and traditions. As we look at new screens and new works in the next few days, perhaps we can freshly appreciate the historical works – carved, cast, drawn, printed and painted – that, in aggregate, point to their sources.