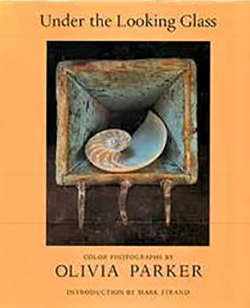 1984 – Under the Looking Glass: Color Photographs by Olivia Parker


Olivia Parker first came to prominence with the publication in 1978 of Signs of Life, a collection of split-toned black and white photographs, and since that time her work has appeared internationally in exhibition as well as on the pages of several major photography magazines. In a relatively short period she has also achieved ― in a time of generally decreasing gallery and market activity — the distinction of becoming one of the best selling “art” photographers in North America. [1] Under the Looking Glass, her second book, presents work similar in spirit to the imagery in Signs of Life but vastly different in execution, as Parker has turned away from black and white and is now exploring the affective and symbolic uses of colour in photographic still life.

Parker’s early work has remarkable beauty and elegance, as well as a certain ephemeral or evanescent quality. As she herself noted in the introduction to Signs of Life, “The living world seems to consist of fine balances and thin edges: small variation within fragile structure, delicate membranes, narrow temperature and pressure tolerances ….” This attitude, or perception or world view, is clearly evidenced in the “fine balances, thin edges, small variations and fragile structures” that can so frequently be found in this work. Carefully poised are light against dark, brown against grey, edge against surface, three dimensions against two. The results are possessed of a fascinating admixture of imbalance and equilibrium, permanence and temporality.

These same qualities carry over into the photographs in Under the Looking Glass, but the addition of colour has enabled Parker to take the genre of still life through a quantum leap. The classic ingredients, both of still life and of Parker’s creative system, remain: the photographs are evocative and nostalgic, reaching us through our sense of past and memory, and cuing our feelings with their faded images, bric-a-brac and memorabilia, flowers, trinkets, postcards and trivia; also used are paintings, drawings and fabrics, bones, feathers, fruit, pieces of mica, mysterious containers and pages from unknown but somehow remembered or familiar sources. There are varying degrees of hand-work, varying amounts of collage and construction, different kinds of complexity or simplicity; but all the photographs meet the established criteria of still life and all reflect Parker’s personal style and outlook. New, however, are certain qualities of resonance and depth made possible by Parker’s incredible virtuosity with colour. Finding colour, responding to it or adding it where necessary (as in her clever, perhaps too frequent, use of red lines and red yarn), Parker always creates a harmonious relationship between colour and mood, meaning and subject. Related shades and hues reinforce and deepen each other; opposing colours accent physical space and visual tension. And after repeated viewings, one discerns that Parker uses colour as a key element in creating the symbolic overtones and emotional “feel” of each image.

We take for granted the perennial drawing power of memory and association, and in an age that places so much emphasis on pop-Freudian symbolism we tend to overlook the purely visual elements of art and immediately involve ourselves, particularly with constructed rather than found imagery, in thematic analysis. This approach can easily be taken with the photographs in Under the Looking Glass, and one could no doubt have a field day using certain reappearing motifs to do an amateur workup on Parker’s psyche. Such a course might be fun, but it would inevitably draw one away from careful looking, which the photographs really deserve, particularly since the images result equally from Parker’s ability to visualize and assemble still life and her skill as a photographer. More valuable than guesswork about the photographer’s unconscious is an understanding of her use of space and scale, her ability to make the contrast between flat planes and three-dimensional objects seem completely logical and her sense of how to combine visual elements within the frame to achieve the strongest possible result. Images such as “Child, 1980,” “Maples, 1980,” “A Reasonable Argument, 1980,” “Red Cages, 1980,” “The Black Package, 1980,” “Possibility, 1979,” “The Eastern Garden, 1980” and “Street Flowers, 1981” show one aspect of Parker’s style: they are dense, balanced, low in key and show a tendency to recede behind the picture plane, creating a self-contained, static world that draws the viewer inward. Other photographs — “Isabella’s Bit of the Florida Coast, 1982,” “Marine II, 1981,” “Three Feathers — Three Crystals, 1981,” “Swan’s Ladies, 1982” and “Turkey Shoot, 1981” — are higher-keyed, more rhythmic in structure, more open in form and more elliptical in meaning; rather than draw the viewer directly in, they encourage fantasy and a much more oblique way of looking.

Some images, particularly the studies of fruit, are fairly typical and weak in comparison with Parker’s best photographs. For some reason a truly original or convincing composition using only three-dimensional objects seems to elude her, and the inclusion of more than one or two of these studies is questionable given the level of imagery in the rest of the book. But for the most part this is a fine collection, involving the viewer on many levels.

A lover of still life would not fail to enjoy this work, nor would a photographer concerned with the expressive uses of colour. And those who struggle with the capriciousness of Polacolor emulsions can only admire the control and subtlety that Parker achieves in such abundant measure, although in fairness it should be pointed out that she has been more than casually subsidized by the Polaroid Corporation, [2] and that Polacolor prints are often seen to better advantage in reproduction than in the original due to a slightly brassy quality that the originals often possess. In any event, both the work and the book are highly recommended.

Don Snyder would like to thank the Ontario Arts Council for its assistance during the writing of these reviews.