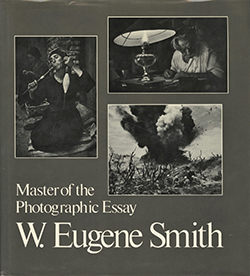 Eugene Smith is now so firmly established as a legendary figure in twentieth century photography that many who appreciate his work tend to think of his life’s output in terms of several dozen extremely famous photographs and photo essays. This inadvertent compression of a forty-year career into a relatively small number of images may help the Smith legend, but it does little for an objective understanding of this remarkable artist’s total accomplishment. W. Eugene Smith: Master of the Photographic Essay, recently published by Aperture, provides viewers with over 1800 reproductions of Smith photographs made between 1937 and 1975, and goes a long way towards de-mythologizing the man and illuminating the photographer.

Edited and with an introduction and commentary by William S. Johnson, curator of the Smith archive at the Center for Creative Photography at the University of Arizona, this book provides valuable information on many levels. For those unfamiliar with the original Life magazine, it reproduces published and unpublished work from Smith’s seminal photo essays, giving a clearer representation of this work than is possible to get through study of the Smith monographs or catalogues that are now available. For photographers who know these essays as they were published, the book provides alternate views, croppings, and even printings — giving a clearer sense of how Smith worked through an idea or how he made major changes in camera position, framing or print tonality in order to improve an image or heighten its expressive value. (It is quite startling to see some of the ‘alternates’ to the most famous “Spanish Village” or Minamata photographs, or an unmanipulated print of the celebrated “Asylum Patient, Haiti” image, for example.) And for those interested in Smith as a creative figure who dedicated his life to humanistic principles as well as photography, this volume places the Smith legend in a different context by revealing a photographer who was as interested in the performing, visual and creative arts as he was in the issues with which his name is usually associated. Included in Master of the Photographic Essay are selections from Smith stories or projects on “Folk Singers” (1947), several short Life essays on theatre (1946-49) as well as the more extensive “Hard Times on Broadway” (1949), “Theatre Girl” (1949), “Recording Artists” (1951), “A Play for Churches” (1951), “Chaplin at Work” (1952), and the largely unpublished “Metropolitan Opera” (1952), “The Loft from Inside In” (1958-68), “Jazz and Folk Musicians” (1959-69); and a series of ‘experimental’ photographs made between 1958 and 1968. This work shows an involvement with and empathy for the creative process in any medium, and helps focus the viewer’s attention on Smith’s own growth as a creative individual as well as photojournalist.

While Smith’s work has always shown a concern for drama and tension both in perspective and tone value, Master of the Photographic Essay shows us that this concern was not a fixed quantity but a constantly evolving aspect of Smith’s style. Looking at his work in specific chronological order, one can see that over the years Smith’s framing became more flexible, his timing more intuitive, his use of light and dark more suggestive, and his reportage more allusive and elliptical. (The only major exception to this generalization is the “Beallsville, Ohio” story of 1969, which is stylistically reminiscent of much earlier work.) It seems quite evident that these changes were not simply a function of more large-scale and self-assigned projects in the last two decades of his career, but that they were representations of a creative growth that was at least in part fueled by Smith’s protracted contact and involvement with the arts, particularly during the 1950s. The “Pittsburgh”, “Haiti”, and “Hitachi” projects, the “Loft” and “Jazz Musicians” photographs all show a stylistic evolution away from formalism and reportage towards interpretation, symbolism, and more personal expression. Events and places are somewhat less concretely described, and the photographer’s interests seem to be gravitating more towards a type of photojournalism that includes freer use of expressive elements and more prominent development of personal themes. It could be argued that these changes simply reflected the various difficulties Smith was experiencing during these years, but the evidence of the photographs themselves indicates an artistic development that was greatly stimulated by Smith’s exposure to music and theatre.

Valuable as it is from many points of view, W. Eugene Smith: Master of the Photographic Essay does have some drawbacks. The reproductions are too small (2 x 3 inches), the selection of these 1800 images from a body of over 10,000 available prints is not clearly explained or justified in the text, the quality of the reproduced prints is not up to Aperture’s best standards, and most of the photographs are not titled or dated but simply grouped by project or assignment and year. Some readers may find these shortcomings extremely problematical, but most will find that these faults interfere more with the enjoyment of the book itself than they do with an appreciation for and deepened understanding of Smith’s photography. A publication such as this may not be the last word about Eugene Smith or even the best way to put together a visual reference, but it is a better source of a large quantity of material than any other book on Smith currently in print; and it also represents what may turn out to be a very significant departure from Aperture’s traditional ‘monograph’ format.