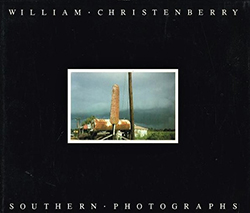 
One’s first reaction upon picking up William Christenberry: Southern Photographs would almost certainly be positive. Christenberry’s photographs, seen in print from time to time (Aperture 81; Camera, May, 1980), are attractive and intriguing, the more so because of Christenberry’s now-celebrated links with — and blessing from — Walker Evans. The book itself is thoughtful and gives evidence of painstaking attention to reproduction quality. And enough work is included to enable the viewer to assess Christenberry’s output over the last two decades with some degree of familiarity.

It’s unfortunate, then, that a book which promises so much ends up being very disappointing. The problem has partly to do with editorial issues: R. H. Cravens’ lengthy and well-illustrated introduction is interesting, but is without any clear focus — Cravens is gossipy where he should be precise and biographical where he should be analytical. In trying to give a complete picture of Christenberry as human being, artist and photographer, Cravens leaves the reader without an accurate perspective on the evolution of the photographic work itself. To choose one example, Christenberry’s all-important switch from small cameras to the 8 x 10 format, which occurred in 1977, is dealt with in two paragraphs — less space than Cravens allots to the theft of Christenberry’s “Klan Room” sculpture from his studio in 1979. And while it may be admirable to include so many references to Christenberry’s life and his work in other media, in a book titled Southern Photographs this kind of critical balance does not make sense.

Another problem arises because of layout. In order to accommodate the 8 x 10 images, Christenberry’s early work, which is small in scale, is reproduced on large pages. The white space glares, reducing the contrast and also the scale of the small prints and making them actually difficult to look at from normal viewing distances. This is particularly hard to accept since Aperture solved the same problem successfully once before: Aperture 81 left a small white border around each image and used a visually comfortable off-white for the page area. This is not carping; a book of this price from a publisher of such repute should be a pleasure to look at, and Southern Photographs suffers inordinately from poor layout and page design.

Ultimately, however, the disappointment engendered by Southern Photographs comes from its content: the 8 x 10 images which compose the latter two thirds of the book simply do not stand up to repeated viewings. Christenberry’s early work had an intuitive feel and a certain “rightness” that really is remarkable. One can still stare at and enjoy these little prints for long periods of time, and they continue to provide a most welcome directness in contrast to the gimmickry, artifice and wanton imitation which is so much in evidence as a by-product of photography’s recent boom years. The 8 x 10 work, although more complex and intellectual, is not correspondingly more probing, more meaningful or more evocative, even though in many cases Christenberry has rephotographed old familiar subjects. The Newbern Warehouse, the “5¢” wall painting in Demopolis, the Palmist Building in Havana Junction, Bloody Pond at Shiloh Battlefield, the Bar-B-Q-Inn in Greensboro and the Sprott Church are all rephotographed — sometimes more than once — in 8 x 10, and various other subjects (gourd trees, graveyards) are carried over into large-format as well. But Christenberry is not reinterpreting with a deeper understanding — he is simply making another photograph, and in some cases (for example, “Church, Sprott, Alabama,” 1981, reproduced on page 125) the more recent photograph is embarrassingly worse than the earlier image. Certainly there is more detail, more perspective control and frequently a more complex plastic balance in the view camera imagery, but there is not more poetry or more inspiration. And there is nothing integral to the photographs that justifies the change of format, either in terms of subject, vision, style or idea.

So what Southern Photographs ultimately provides is a retrospective look at the work that established Christenberry’s reputation coupled with an extensive presentation of imagery which will, most likely, not stand the test of time. The stylistic split between the two bodies of photographs is neither explained nor presented well, and at the end of the book one tends to go back over the pages thinking that one has missed something or believing that a lingering sense of irresolution will disappear if one looks again more carefully. But this does not happen. Christenberry can be a fine photographer but he also is an erratic one, as this book demonstrates only too well.