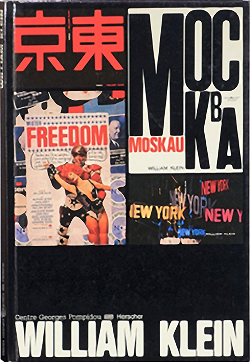 
By now most people are aware of the uproar that accompanied publication of the Aperture monograph on William Klein: Klein attempted to stop publication, Aperture sued; claim and counterclaim followed in rapid succession. If Klein were a minor photographer or Aperture a minor publisher, the matter might have been forgotten and the book remaindered, but the book is still around (in all its oversized, overpriced glory), and doubtless Klein still feels as if his work has been seriously misrepresented.

This situation is regrettable, for Klein remains one of the major photographers of the last three decades. Some justice was recently done, however: in May and June of last year the Centre Georges Pompidou in Paris mounted an extensive Klein exhibition that occasioned release of a new book, published jointly by the Centre Pompidou and Éditions Herscher.

The latter book, which can sometimes be found this side of the Atlantic, is everything the Aperture volume was not, although for the most part it reproduces the same photographs, often in similar order. For one thing, Herscher published the book in an intelligent size and paid considerable attention to reproduction quality as well as layout and sequencing. For another, Klein’s work in other media (painting, design, film) is represented in reasonable proportion to his photography and is unobtrusively integrated into both text and reproductions. And for a third, the introduction (free-form interview excerpts, in French) by Carole Naggar is interesting, informational and accurate in addition to being engaging and spontaneous; and the book contains an excellent bibliography/filmography.

Klein’s photographic career has been meteoric: between 1956 and 1964 he published four books (New York, 1956; Rome, 1958; Moscow, 1964; and Tokyo, 1964), all of which remain out of print classics. Since 1962 he has made thirteen major films and collected awards including the Grand Prix du Festival International de Tours and the Prix Jean Vigo. In 1978 he began exhibiting still photographs once again, and has had twenty-four exhibitions since that year (in France, Holland, the U.S., England, Italy, Switzerland, Sweden and Ireland), the majority of which have occurred since 1980. It seems appropriate that his interest should shift back toward still photography, and the reappearance of his work after twenty years gives an entirely new audience access to his vision — a vision which remains as startling and fresh as it was in the 1950s and 1960s.

In the post-Robert Frank era of photography, all the attention given to the snapshot aesthetic and all the critical and material success achieved by the likes of Garry Winogrand and Elliott Erwitt is perhaps inevitable. But if one measures the work of the latter photographers against Klein’s output, by any objective standard Klein emerges as the more versatile photographer, the more thoughtful artist and by far the more acute observer of society and behaviour. Erwitt may possess a keener sense of humor; Winogrand may be a sharper social critic; but Klein’s work has a breadth, a daring, an insight and a raw energy that legitimately set his photographs apart from the work of so many of his contemporaries, both well-known and otherwise. This is superb photography, interesting and challenging, and it is published in a format that does it credit. If you are interested in Klein, this volume will provide considerable reward; if you aren’t, you may find yourself pleasantly surprised.