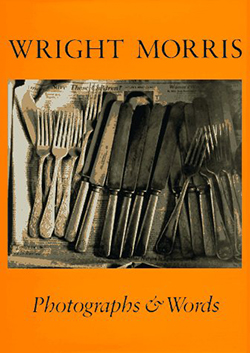 
Wright Morris’ mastery of the writer’s craft should come as no surprise since he has published some thirty books since 1942. Nonetheless, it is refreshing to open a photography book and find a paragraph like the following, which introduces his essay “Photography in My Life” at the beginning of Wright Morris: Photographs & Words:

In October of 1933 my room on Florianigasse in Vienna looked out on a small garden where the blind came to walk. When my bedding was aired at the casement in the morning I would lean out and observe them. They walked in pairs, stiffly erect, marching slowly to an unheard music. It shamed me to spy on them in this manner, but I was young, each hour seemed precious and I was eager to be one of those on whom nothing was lost. To hold fast to what might escape me, what I needed (I thought) was a camera.

This sense of refreshment, or enjoyment, or simple appreciation for a well-made sentence, continues as one reads the essay’s remaining forty pages. Morris shares freely his years and experiences as a writer and photographer: happenings, discoveries and travels in pursuit of material for words or images and the implicit search for a deeper understanding of self and fellow beings are set down directly and in a specific relation to the photographs that follow. And having allowed us to observe him, Morris concludes “Photography in My Life” with some observations on the medium itself that are also worth quoting:

The dawn of consciousness may be the dawn of time as perceived by man. From that first moment of awareness man has sought a piece of time’s living substance, an arrested moment that would authenticate time’s existence. Not the ruin of time, nor the tombs of time, but the eternal present in time’s every moment. From this spinning reel of time the camera snips a sampling of the living tissue, along with the distortions, the illusions and the lies, a specimen of the truth….

However varying their points of view, all photographers share the common field of vision that the mind’s eye, and the camera’s eye, has imposed on this century. Quite beyond the telling of it, as well as the seeing of it, exceeding both our criticism and our appreciation, the camera’s eye combines how we see with whatever is there to be seen. What it has in mind for us may not at all be what we have in mind for ourselves.

The images contained in Wright Morris: Photographs & Words are as much a source of pleasure as Morris’ writing. The book reproduces sixty-one photographs Morris made between 1938 and 1950, more than half of which were made in Nebraska during his visits to the areas of the plains where be grew up. The best of these photographs combine involvement, nostalgia and an autobiographical sensibility with a wonderful directness and clarity. “Uncle Harry, Home Place”, “Straightback Chair, Home Place”, “Farmhouse near McCook, Nebraska”, “Light Pole and Grain Elevator, Nebraska” and “Bedroom and Washstand, Southern Indiana”, for example, give the viewer renewed faith in the pictorial qualities of simplicity, balance and economy of means without in the least sacrificing the subjective elements of intuition, understanding and absorption. The pictures are spare and evocative; one looks at them for long periods of time.

No book is perfect: Morris occasionally congratulates himself in the text; the reproductions are slightly hard-edged and the paper slightly too shiny for the subject matter; one could argue that Walker Evans and Paul Strand took the same kinds of subjects to greater heights or that Morris himself achieved a stronger blend of image and text in the earlier The Inhabitants,The Home Place or God’s Country and My People. These points should be acknowledged but there isn’t much need to dwell on them. If you enjoy good writing, are interested in times and places not so distant in years or miles but hard to locate in the present world and enjoy unembellished, straightforward photography, this book brings many rewards.