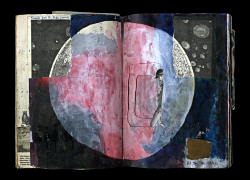 “In a world of disturbing images,” wrote Henry Holmes Smith, “the general body of photography is bland, dealing complacently with nature and treating our preconceptions as insights. Strange, private worlds rarely slip past our guard…. This is probably not good for mankind; it is certainly unfortunate for photography.” And in another, earlier essay, Smith described the situation this way:

Pressured to identify standard visual images that millions may relish, picture editors have fashioned a language of photography that approaches baby talk…. A photograph’s impact turns out to be the visual equivalent of the exclamation or interjection, repeated to the point of monotony. A close look at such a photograph reveals that it is telling the public only what is already completely familiar…. The “appeal” of such photography is just the journalistic name for the sensational, trivial, cheaply sensual or banal, and morbid.

You won’t find this situation here. While Balint Zsako has described the oppositions of Zsako vs. Photography as a struggle to manipulate the materials of photography, or a wrestling match between his artistic intentions and “what the material wants to do,” in the larger sense he is taking on the same problem — of developing an original and mature language of photographic meaning – that so preoccupied Smith.

Talking about this work, Zsako acknowledges the traditional idea that a photograph is an observed image, and recognizes that “not that many people think you can do other things, or if you do, it has to be digital….” He then describes investigating what can be done: with intuition, with method, with process, and with photography itself.

“I’m not just making pictures and putting them together…I know what I’m doing, but it’s not the same as having a complete plan…each piece is different. Some are more abstract, some more narrative, especially up close…there is a tension between real and fictional. [In some works] I’m reframing what’s inside the picture in a different way; the image might be like the windows of an apartment building. [In others] you see faces but no eyes, eyes but no face, full faces with no focus, but never a complete face….

Fragments and words, especially fragments that are compelling and interesting, can make the picture say so much more. It’s a different story every time….”

Photographs and parts of photographs; paintings, drawn and painted images; film strips, film segments, even sprocket holes; words and images, images and words (all you need for all you want…; probably…; tell your mother, sister, and your sister’s friends…; the four noble truths and some shit I can’t pronounce…); more scratch lines than could possibly be counted – these are the raw materials of the images. The ideas come from somewhere else, and are harder to pin down, but through them Zsako addresses Smith’s eloquent concerns in a direct and meaningful way. These aren’t easy pictures, and some of them are both “strange” and “private” – but we need them, probably more than ever; and they reward the considerate viewer many times over.